NOTE: Spoilers from throughout Series Nine of Doctor Who are present in this review

Series Eight of Doctor Who may have introduced us to Peter Capladi’s Twelfth Doctor last year, but Series Nine is the point where Capaldi’s Doctor really started to reach his true potential as a character. This led to Series Nine being arguably the best season of New Who to date, as well as the point where viewers are sure to consider Capaldi a favourite amongst the many Doctor actors throughout history.

On paper, Series Nine was a bold departure from the previous format of New Who. With the sole exception of “Sleep No More” and “Face the Raven”, every episode in the season was part of a two-part story. Again, with one sole exception, all of these stories were fantastic to boot! They all offered excellent blends of comedy, drama, mystery and thrills, having clever setups and clever resolutions. The bookending plots from the start and end of the season felt especially sublime, delivering a fantastic Daleks/Davros plot, and a fantastic return to Gallifrey and the Time Lords, respectively. 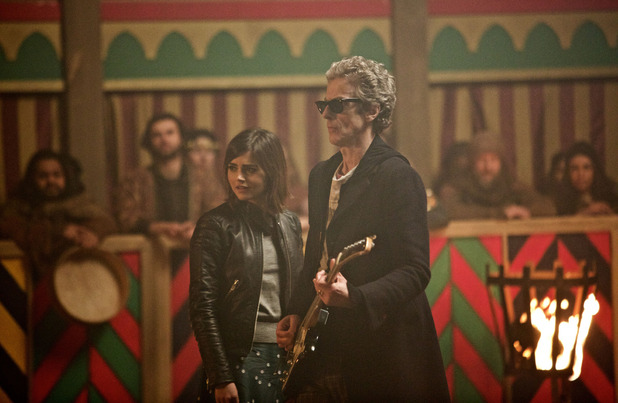 Series Nine is also distinct for introducing a great new core character to the canon, almost like a spiritual successor to the immortal Captain Jack Harkness (who is probably off-limits for Doctor Who for the foreseeable future, given John Barrowman’s commitments to highly popular CW/DC Entertainment series, Arrow), in former Viking girl, Ashildr, portrayed in a superb recurring capacity by Game of Thrones’ Maisie Williams. The Doctor makes the controversial choice of saving Ashildr’s life in “The Girl Who Died”, at the cost of rendering her immortal. Ashildr, then going under the name, “Me” for the rest of eternity, starts to then function as a big link to the fallout of The Doctor’s actions on Earth, simultaneously serving as both an ally and occasional enemy. Williams’ great performance is appealing enough, but the idea of designing a character around The Doctor changing history, and the implications it has, is a very smart idea, and one that will always have viewers looking forward to the presence of Ashildr that could appear at any given moment, whenever The Doctor visits Earth. Hopefully, we continue to see a good chunk of her in Series Ten and beyond!

There’s obvious demand to make Maisie Williams a companion to The Doctor, but for pretty much the entire season, Clara Oswald continued to occupy the role, despite viewers knowing from the get-go that Jenna Coleman was leaving the series at some point this season. It seems like Coleman gets bursts of determination to leave, but then ultimately backpedals on them, since Clara never actually made a full exit at any point during the season. Sure, the end of the season forced The Doctor to find a new companion, but even when Doctor Who sent fans into a frenzy during the events of “Face the Raven”, which killed off Clara after her recklessness gets the better of her, the show didn’t commit to Clara’s, “Death.”

Even in the season finale, “Hell Bent”, Clara ended up at The Doctor’s side for the entire affair, with her death conveniently reversed by the Time Lords. Yes, Clara has no heartbeat, and her death is supposed to be a fixed event in history that she can’t escape, but since she’s not aging, and has a TARDIS of her own now, she might as well just run through time forever. I guess that sort of completes the circle of Clara becoming so obsessed with The Doctor that she starts to become The Doctor, but some may be annoyed that New Who still refuses to properly kill off companions, and stick to it. Once again, Amy and Rory don’t count, as they were allowed to live full lives in a different time.

Fortunately though, despite the exit of Coleman being announced as a bigger deal than it turned out to be, especially as the season ends with the door left wide open for Coleman to reprise her role as Clara in the future, Clara’s exit was still mostly handled well. The supposed final scenes between Capaldi and Coleman were well-written and very emotional, particularly as we’ve seen Clara sort of act like a mirror to The Doctor’s best and worst nature, something that made Coleman a fantastic fit for Capaldi’s especially world-weary, imposing Doctor portrayal. It’s tough to watch Coleman go, since she’s been such a big part of the series since Series Seven, back when she was, “Oswin” instead of Clara to start, but if The Doctor is to get a new main companion, this is probably the best way to cap off Clara’s story arc.

The real star of the season though, of course, are the storylines, and Series Nine felt like an especially fresh, forward-thinking season overall. The two-part direction for most of the season’s plots turned out to be a brilliant move, especially when it allowed more time for the writers to more aggressively push the series forward. Things like the creation of Ashildr, the origins of Davros (including a surprising encounter with The Doctor long before he became creator of the Daleks!), the death of Clara (even if it was reversed in the end), and The Doctor finally finding his way back to Gallifrey, the long way around, all had Doctor Who taking bold and fulfilling strides forward. “Under the Lake” and “Before the Flood” focused more on being a good old-fashioned Doctor mystery, along with the found footage-style, “Sleep No More”, but these were also great episodes, which still proved that, even as everything shifts around him, the Twelfth Doctor is still just as capable at being The Doctor.

Series Nine even finally cemented the nod to Peter Capaldi portraying an entirely different character in, “The Fires of Pompeii” back from the Tenth Doctor’s run during Series Four (though I guess Capaldi’s turn on former spin-off, Torchwood isn’t being referenced yet), with The Doctor realizing in “The Girl Who Died” that his familiar face is meant as a reminder that he is The Doctor, and he saves people, as he did the family of Capaldi’s character in, “The Fires of Pompeii”, despite the implications it may have on history. This was a brighter reason than some fans may have anticipated, with Capaldi’s face not being penance or torture, but instead meant to keep The Doctor honest. This was probably the best possible result of the show making reference to Capaldi formerly playing a different character long before he was The Doctor, especially during a season that had plenty of dark storylines already, without needing to make the Twelfth Doctor feel worse about his newly-aged complexion.

The only weak link in a series of home runs throughout Series Nine’s storylines was the Zygon storyline, an idea that was great on paper, but problematic in execution. Doctor Who tried to go for a Captain America: The Winter Soldier-style plot with the Zygons in “The Zygon Invasion” and “The Zygon Inversion”, having a series of Zygon radicals demand that they be allowed to live in their natural forms, and even appearing to take down UNIT from within in the process. Unfortunately though, the plot came off as unoriginal and contrived, even if it did have some good twists, and it did nicely call back to the 50th Anniversary Special from 2013. It also reversed another big death though, with Osgood being alive and well, despite her apparent death during Series Eight finale, “Death in Heaven” last year, naturally explaining that the double died… Or was it the real Osgood? Honestly, it was probably the Zygon Osgood, because the human Osgood is a terrible liar, with her lousy poker face seeming to blatantly show that she is the original, human Osgood.

Even with that lone weak link though, Doctor Who delivered a standout season overall in Series Nine, offering some of the best episodes in the show’s long history during this run, and definitely delivering the best season of New Who yet, at the very least! There was a lot of positive development, high emotion and fulfilling excitement, as the Twelfth Doctor’s time with Clara came to a close, and The Doctor’s intervention with history came to influence many worlds like never before. With the door now wide open for lots of exciting new adventures with the Twelfth Doctor in Series Ten, it’s no exaggeration to say that Doctor Who has never been better!

Doctor Who: Series Nine Review
Doctor Who achieved a new high point in its New Who run with Series Nine, a standout season that beautifully pushed the show forward, and offered a heap of fantastic, fun and thrilling plots that truly started to reach the highest potential of the Twelfth Doctor!
THE GOOD STUFF
THE NOT-SO-GOOD STUFF
2015-12-13
93%Overall Score
Reader Rating: (0 Votes)
0%