After a couple of weeks off, The Big Bang Theory returned with, “The Earworm Reverberation”, a mostly ok episode that wasn’t all that noteworthy, beyond resolving one of the season’s biggest overarching conflicts to date. The way it goes about this is kind of interesting, though it does beat a one-note Sheldon joke into the ground as well, which makes the humour feel a little uneven this week.

Things begin rather interestingly though, as Sheldon finds he has a song stuck in his head that he can’t identify. Sheldon incessantly hums the song, but can’t seem to recall what it is. He even consults the Rock ‘n Roll Hall of Fame about it (who are apparently quite rude to him, naturally), but can’t seem to place it. Since Sheldon has an eidetic memory, he believes that this is a sign that he’s going insane, and begins to document his apparent descent into insanity.

This was kind of amusing at first, though the joke got old before long. Everything stemmed from Sheldon not knowing where this song came from, and soon, the annoyance of Leonard and Penny translated to the audience. Sometimes, The Big Bang Theory is great at making Sheldon surprisingly endearing, even when he’s supposed to be very annoying. This wasn’t one of those episodes though. Instead, Sheldon just came off as exceedingly irritating, without much in the way of redeeming qualities throughout most of the episode.

I say most, because Sheldon eventually realizes that the song is a Beach Boys tune about half a man who became better from the love of a good woman. Where Sheldon heard this song is unknown, especially since he apparently doesn’t like the Beach Boys (his retort to Leonard when Leonard asks about this is kind of funny. “They have ‘beach’ in their name, what do you think?!”), though he draws the obvious conclusion from this song that he misses Amy. Realizing that he wants Amy back, Sheldon takes off for Amy’s apartment.

The timing is a bit unfortunate though, again, as Amy has called Dave to her apartment for another dinner date. Really, we’re going to bring up Dave again? The show seemed pretty sure that it was done with the whole Stephen Merchant guest stint, but I guess not. Merchant’s character feels like he’s officially run out of jokes now, despite Merchant’s best efforts to make Dave funny. He sometimes succeeds, though more often than not, one has to wonder why the episode bothered to bring him back, especially since there’s no way he was going to get anywhere with Amy. 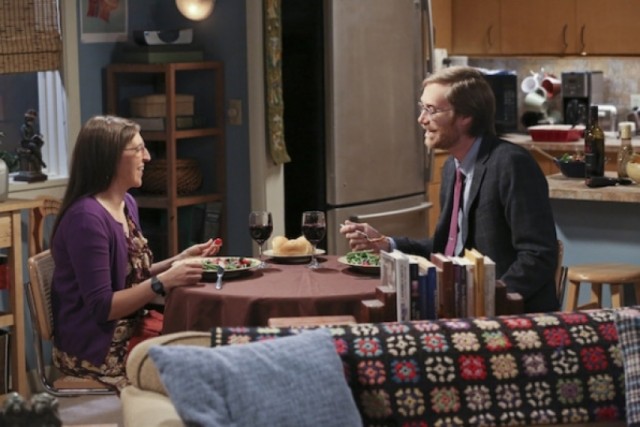 So, Sheldon professes his love, Amy accepts, and the two are back together. Rejoice, fans of Shamy! Dave even takes this surprisingly well, even commenting on what a lovely evening it is after Amy quite literally kicks him out of her apartment, incessantly kissing Sheldon all the while. Oh, Dave. We hardly knew ye, even if you were based around a pretty limited joke.

There was also a subplot to be had this week, involving Howard and Raj. The band that the two recently formed, “Footprints on the Moon”, apparently has a single fan on the Facebook page that Raj built. The two decide to get all of the personal info they can about the guy, and eventually come across him in a coffee shop. When he picks his nose and eats it however, the two get disgusted and leave, even trying to scurry away when the fan tries to grab their attention. Really, he picks his nose and eats it, and that somehow makes Howard and Raj flee in terror? That’s the best that the writers could do after a two-week hiatus? Honestly, it was a weak end to a throwaway subplot, even if it was cool to have Footprints on the Moon come up again. 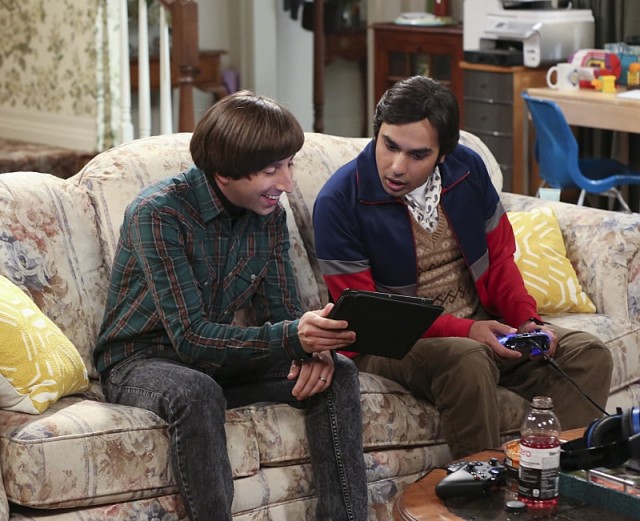 Ultimately, “The Earworm Reverberation” was a surprisingly underwhelming episode in some respects, which feels like it was sustained exclusively on finally resolving the Sheldon/Amy break-up. The subplot with Howard and Raj felt like it was only there to fill runtime, and the one-note Sheldon joke made the episode feel like it was grasping at straws for some of the humour. This is disappointing to see, after the show took two weeks off, but hey, we have one episode left in 2015. Maybe there’s still time for The Big Bang Theory to close out the year on a better note.

The Big Bang Theory 9.10: "The Earworm Reverberation" Review
The Big Bang Theory returned after a couple of weeks off, to finally resolve the Sheldon/Amy break-up, though its latest episode didn't seem to have much else going for it, especially with such limited humour to work with in the main plot.
THE GOOD STUFF
THE NOT-SO-GOOD STUFF
2015-12-11
68%Overall Score
Reader Rating: (1 Vote)
100%