It was bound to happen eventually. With all of the mentions and adoration by Peralta, he finally gets to live out a real-life Die Hard situation, as he, Boyle and Gina become trapped in a Goodwin’s during a robbery and hostage-taking! The Die Hard parody in this midseason finale of Brooklyn Nine-Nine is more than a goofy homage though. It makes for another all-around winning episode to close out the show’s 2015 run on, as well as its final Sunday, before it moves back to Tuesdays in 2016.

Almost all of the episode revolves entirely around this main plot at Goodwin’s, after Peralta discovers that he’s accidentally forgotten to get a Christmas gift for Boyle. Gina suggests going to Goodwin’s, but after Peralta is forced to lie to Boyle by claiming that he actually forgot Santiago’s gift, Boyle forces himself along. Gina however agrees to distract Boyle, if Peralta gets her a shower pic of Jeffords in exchange. Gina’s priorities are always the best priorities. 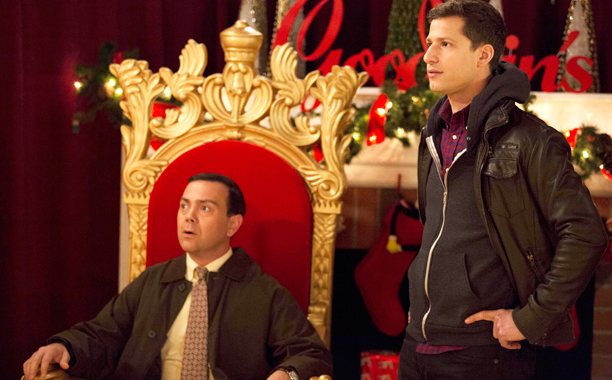 When the two sneak into the store, right before the criminals show up, they find themselves trapped, though with the advantage of the criminals not knowing that they’re there. As Peralta geeks out about living Die Hard on Christmas Eve, the two must nonetheless form a plan, which Gina immediately thinks should be rushing the bad guys with improvised hairspray flamethrowers. Again, Gina’s priorities are the best priorities.

From here, the episode really fires on all cylinders with the comedy. Satirizing Die Hard is not uncommon amongst all sorts of media, but Brooklyn Nine-Nine’s Die Hard parody felt especially fitting, and a cut above many of the other attempts since the movie first hit theatres in 1988. The other reason why it worked very well is because Peralta has allies in the form of Gina and Boyle, and not only that, but their plans don’t always go perfectly. In fact, Gina is captured almost immediately, when she ignores Peralta’s orders, and runs for a handful of hairspray bottles.

This story arc also set up more interesting development for Jeffords, who is yet again making a futile effort to relax and unwind, getting two personal days to spend with his family for the Christmas season. After Peralta tips him off to the hostage situation however, Jeffords must once again leave his family to look after his squad at the Nine-Nine, yet again getting flak from his brother-in-law, Zeke. Surprisingly though, Jeffords actually stands up to Zeke for the first time, and brings up an interesting fact that the show never mentioned until now; Zeke is actually chronically unemployed! It’s fitting in a way, and it helps to explain why Zeke seems to bully Jeffords so much, since Zeke no doubt envies his successful brother-in-law. 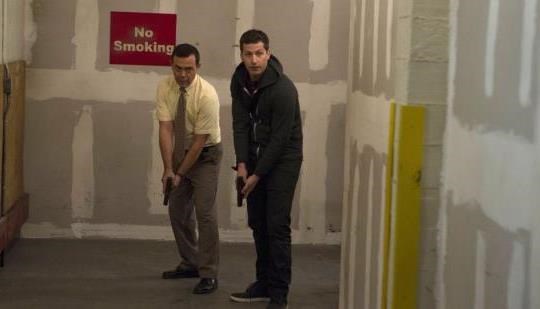 The Die Hard parody is also enhanced further when Jeffords learns that The Vulture is actually in charge of the hostage negotiations, which is about as sensible an idea as you’d imagine. The Vulture is immediately difficult, and Jeffords has to desperately try and talk him down from sending a squad of cops into Goodwin’s, which The Vulture just mocks. Eventually though, Jeffords’ stress level once again gets the better of him, and he physically picks up The Vulture and drops him in a dumpster, in front of all of the nearby officers! I can’t say the guy didn’t deserve it.

After Peralta and Boyle take out some crooks together meanwhile, the two decide to try and crawl through the vents to take out the rest, further completing the Die Hard homage. Peralta however accidentally alerts two criminals, insisting that Boyle hide in the vents instead, as he’s taken hostage, and deduces with Gina that the bad guys are going to escape from the sewers, bypassing the police barrier outside. This allows Jeffords to capture them, after Boyle takes out the one credible bad guy amongst the robbers, whom Peralta is disappointed in as criminals, since they’re Canadian, not German. As you can expect, Peralta is not a very good fake Canadian on the walkie-talkie either. 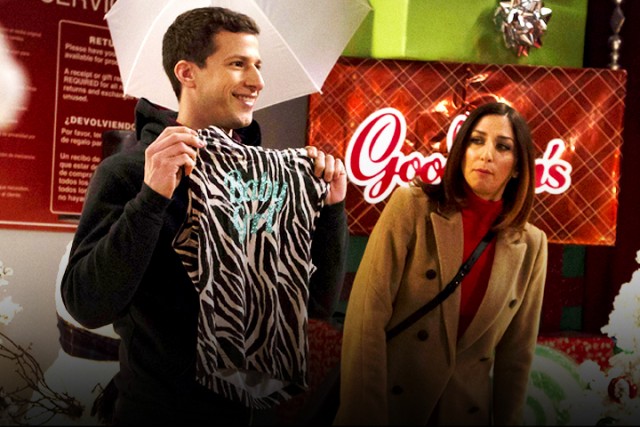 When all is said and done, Boyle forgives Peralta for forgetting his gift after he fesses up, since Peralta gave him the gift of letting Boyle have his moment, even if it meant horribly mangling John McClane’s catchphrase, since this is still a syndicated FOX series, after all. Holt then comes on to the scene to commend Jeffords for maintaining a high-pressure situation with no fatalities, and all of the criminals successfully arrested. He suggests that Jeffords should take an upcoming exam to be promoted to lieutenant, which is the next step to him becoming a captain. Jeffords brushes off the idea for now, but it’s an intriguing one for the show’s return in 2016, and could suggest that someone like Diaz could become a sergeant in Jeffords’ stead. Even with that commendation however, Jeffords is still suspended for a week, due to putting The Vulture in the garbage. Well, I guess he’ll get that personal time he always wanted, at the very least.

Outside of all of these satirical Die Hard shenanigans, there was a brief subplot involving Santiago, which had strong laughs, even if it felt a little excessively disconnected from the big events at Goodwin’s. The subplot involves Santiago trying to go along with Holt and Diaz to a Polar Swim event to prove that she’s not a wimp. Predictably, Santiago doesn’t do well with the icy water (this is a great double whammy reference, not only to her competitive identifier from the pilot, but for Jeffords’ botched strategy for Santiago to quit smoking with ice water), but is forced to come in anyway, when she has to alert Diaz and Holt to the hostage situation towards the end of the episode. This was little more than a funny aside, but Santiago had some of her best jokes in a while in this episode to compensate, particularly a hilarious cold open for the episode, where she tries to get around Holt’s policy of no Christmas gifts by leaving an unmarked box with a vague message scrawled by her weak hand, which Holt mistakes for a bomb, and evacuates the precinct over. Very funny stuff! 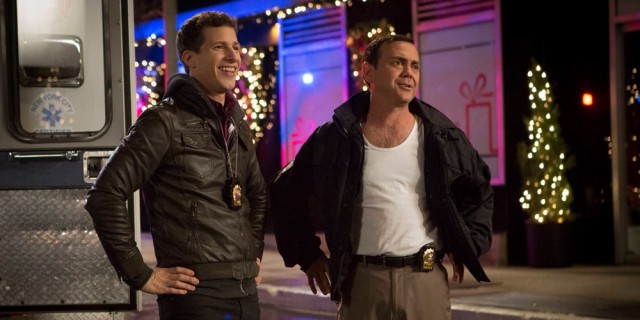 “Yippie Kayak” continues to have Brooklyn Nine-Nine on a roll, capping off 2015 on a hot streak. The episode was a clever and funny Christmas-themed offering, and a midseason finale that set up some good promise for 2016, at least for Jeffords, who might be getting a sweet promotion soon! It feels odd to know that Brooklyn Nine-Nine will be vacating Sundays in 2016, since it felt like such a good fit for FOX’s Sunday night comedy bloc, but I suppose that the show started on Tuesdays, so it won’t be impossible to get used to. As long as this great quality keeps on coming, I’ll be happy, regardless of which day of the week we check in with the Nine-Nine!

Brooklyn Nine-Nine 3.10: "Yippie Kayak" Review
Brooklyn Nine-Nine closed out 2015, and its Sunday run, with a strong, clever and very funny Die Hard parody for the Christmas season, with almost every character getting plenty of big laughs to enjoy, along with the promise of big things to come for Jeffords!
THE GOOD STUFF
THE NOT-SO-GOOD STUFF
2015-12-14
90%Overall Score
Reader Rating: (0 Votes)
0%