UPDATE: Sony and Kojima have confirmed that the flagship Kojima Productions mystery game is also in development for PC, though its PlayStation 4 version is currently receiving higher billing.

After Konami tried to dance around the issue, on top of suffering some pretty awful PR disasters in recent months, culminating in Geoff Keighley publicly calling the company out for barring Kojima from attending The Game Awards a couple of weeks ago, where Kojima was intending to go and accept the award for 2015’s best action/adventure game, Metal Gear Solid V: The Phantom Pain at the show, the record has finally been set straight. As rumoured, and as Konami repeatedly attempted to cover up and even outright lie about, claiming Kojima was, “On vacation” when news broke otherwise, it’s now officially confirmed that Hideo Kojima has left Konami, and founded his own independent game studio. 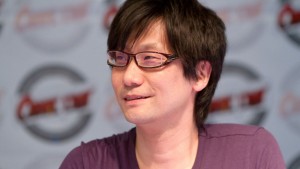 The studio will maintain the label of ‘Kojima Productions’ (albeit with an altered logo), which was the name for Kojima’s team that worked on the recent Metal Gear Solid games for Konami, along with assisting in efforts on developing the original Castlevania: Lords of Shadow, and the now-cancelled Guillermo del Toro/Norman Reedus collaboration, Silent Hills. Many staff members of Kojima Productions also left Konami at the same time, to join up with Kojima in his new business venture.

Predictably, Konami did not issue a statement regarding the departure of Kojima, though Kojima confirmed the news himself on Twitter, along with activating a website for the new, independent Kojima Productions, at www.kojimaproductions.jp, with a press release solidifying that he is no longer involved with Konami. Also corroborating the news is Sony, who confirmed, alongside Kojima, that Kojima has already delivered a pitch for his studio’s flagship game project to the PlayStation outfit, which they are keen to get cracking on. This immediate move by Kojima to ally with PlayStation is unsurprising, since Kojima has publicly admitted on several occasions to most enjoying developing games for Sony platforms, making it small wonder that his studio’s first big project would be an upcoming PlayStation 4 exclusive that Sony would be all too happy to jump at, given Kojima’s outstanding game development pedigree.

This mystery PlayStation 4 game will not be a Metal Gear game, nor will it be Silent Hills, sadly, as those IP’s are still owned by Konami. It is however possible (and likely) that Kojima could make a spiritual successor to Metal Gear as a brand new IP, similar to projects like the Mega Man-inspired Mighty No. 9, Castlevania-inspired Bloodstained: Ritual of the Night, and Banjo-Kazooie-inspired Yooka-Laylee, upcoming independent games that have their original creators and/or veteran developers involved in their production, when their former publishers refused to green-light sequels in the original franchises. It’s equally possible though that Kojima may also want to move away from Metal Gear-style gameplay, and do something entirely new. We’ll have to wait and see what the man has cooking in the future.

Whatever it is though, it’s bound to be great, as Kojima has never disappointed in the game development scene. We wish Kojima the best of luck in his new business venture, and look forward to experiencing the upcoming projects of the new and improved Kojima Productions, whatever form they take!

Keep sneaking to Eggplante for all major news and updates on Kojima Productions, Konami and Metal Gear.