After releasing the third episode of upcoming NBC sitcom, Superstore on NBC’s website for American viewers a few weeks ago, the episode has only now made it to a Canadian audience on Global’s own site. “Shots and Salsa” is an episode that seems inevitable at some point in any workplace comedy, being all about challenging the “isms” of a work environment.

This grand idea is perhaps a bit more than the show can handle in its early episodes, which leads to “Shots and Salsa” feeling like the weakest of the three initial Superstore episodes that were released early, before the show’s proper debut in 2016, but the episode still has enough humour to get by. The increased edginess of the episode doesn’t feel like it’s totally balanced with the more silly, The Office-style humour that the show is clearly striving for, but we can probably chock this up to the show still being in its infancy.

Regardless, the episode begins with Cloud 9 deciding that they want to sell, “Authentic” Mexican salsa, with Glenn appointing the other Latina woman besides Amy on the store’s work force to help hawk it to customers. This upsets Amy, particularly when the woman adopts an exaggerated Mexican accent to try and entice customers to buy the salsa. Amy becomes determined to out the woman as a fake who is exploiting her heritage, but this predictably leads to disaster.

Meanwhile, Jonah talks to Garrett about the importance of helping people, though Garrett warns that Jonah shouldn’t go out of his way to help anyone within the walls of Cloud 9, as it will lead to the feeling of sinking in quicksand, under an unending deluge of requests that can’t be fixed. Jonah resolves to prove Garrett wrong by helping the pharmacist carry flu shot boxes, only to find himself roped into an ever-increasing series of pharmacist demands, which don’t even pertain to Jonah’s department.

While the apathetic pharmacist led to some amusing moments, the jokes at the pharmacy felt less effective than most of the others. I’m not an expert at working at mass merchandisers, but I’m pretty sure that you need to have a pharmaceutical license of some kind to work at the pharmacy, which Jonah clearly doesn’t have. I can understand Jonah carrying boxes, but when he’s told to give out flu shots and deal with prescriptions, the joke is strained to breaking point, since this is all kinds of illegal. Moreover, anyone who has worked for a big corporation like Wal-Mart or Target, will be able to tell you that those stores are petrified of lawsuits, which Jonah doing pharmacy work would open Cloud 9 up to a legion of, so rather than generate relatable humour, the whole ‘Jonah working in the pharmacy’ angle simply doesn’t feel like it makes sense, and thus, doesn’t register.

The rest of the episode dealt with the fallout of the salsa incident, which comes to a head when Amy is caught similarly trying to chew out Mateo for another racist impression, by doing an even more exaggerated Asian stereotype impression, right as Jonah gets caught in the headlights for helping a racist old lady through the pharmacy line. This led to another uncomfortable video presentation for the Cloud 9 crew, setting up what could actually be a decent running gag for the show, where the employees are constantly called in for annoying or uncomfortable videos and presentations in the break room. The show scratches upon some strong humour with corporate fallacies at minimum wage jobs, though it doesn’t quite dig into the full potential of these gags yet. We do get another funny scene of Dina chewing out Sandra for a legitimate concern though, even if it seems like Sandra has done a rather inexplicable one-eighty with Sal this week.

The other sticking point with the episode is that the resolution to the main plot with Amy didn’t hold water either. Amy struggles to sell the salsa to anyone, due to sticking to her principles of not pretending to be a Mexican stereotype. When Dina points out that every salsa jar sold goes to a charity that benefits orphans however, eventually, Amy capitulates, and pretends to be an exaggerated Mexican woman, which draws flocks of customers, complete with the very-obviously-Asian Mateo pretending to be her brother, which somehow ends in a fiesta-style dance to clapping crowds in the middle of the store. What?! I’m not sure what the joke was going for here, but it feels like it went too far into the realm of raw silliness, especially when it seemed to send the message that people will only buy things if they come from a stereotype. That really doesn’t make sense, especially not in our hyper-politically correct modern society, where most people would feel that Amy is in the right all along, for not wanting to sell salsa under stereotypical pretenses. 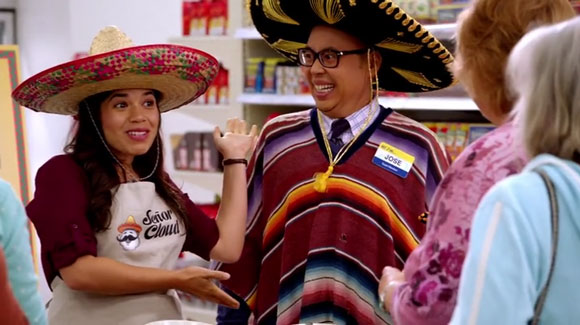 “Shots and Salsa” still had some decent comedy in it, but overall, it felt like it was the least grounded of the three early episodes, and that led to a bunch of jokes and scenes that didn’t feel like they gelled. There was even an entire subplot about a customer looking for the perfect tartar brush, which largely felt like it was only there to take up runtime. Nichole Bloom’s Cheyenne was also missing without explanation in this episode for some reason, which was disappointing, since she’s one of the show’s most likable personalities so far. Maybe the show will make the excuse that she’s only part-time, and won’t be in every episode, but still, she was missed here. It felt like the show in general was missing something here, something that it hopefully finds again, and in greater numbers, when Superstore properly hits the airwaves in 2016.

Superstore 1.3: "Shots and Salsa" Review
Superstore's third early episode is sadly the weakest of the three, with less refined and grounded storytelling, though it still has enough humour to get by, touching on some comedic inspiration with corporations abandoning principles when it means higher sales.
THE GOOD STUFF
THE NOT-SO-GOOD STUFF
2015-12-18
70%Overall Score
Reader Rating: (0 Votes)
0%