Frankly, the Doctor Who Christmas specials tend to miss more often than they hit. I can appreciate the fact that many of the Christmas specials aim to be more light-hearted and relaxing, but this seems to often clash with the weightier, more grandiose stylings of New Who. Last year’s special, “Last Christmas” was alright, at least, and “The Runaway Bride” was a standout offering back in 2006, but most of the others have had major failings in some respect or another.

Still, we are coming off of Series Nine, arguably the best season of New Who to date overall, and that should give audiences hope for this particular Christmas special. Fortunately, that hope is well-founded as well, as, “The Husbands of River Song” is another rare example of a Doctor Who Christmas special that actually works very well, beautifully tying into Series Nine’s frequent themes of grief and letting go of what one can’t change, while also allowing the series to revisit one of its best characters; River Song, a character that the show formerly seemed to be abandoning with the loss of Amy and Rory, and of the Eleventh Doctor. 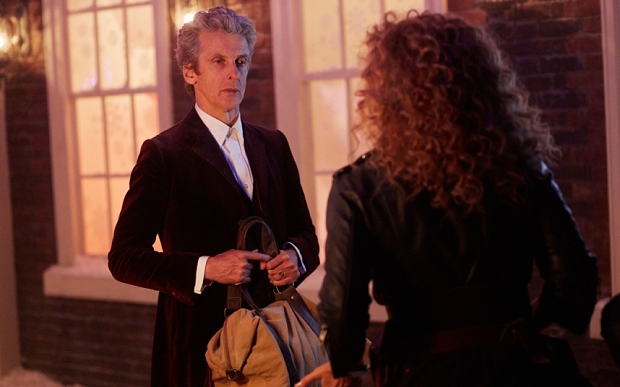 This marks the first time that River has interacted with Peter Capaldi’s Twelfth Doctor, and it doesn’t disappoint. The banter between River and The Doctor, with River being oblivious to The Doctor’s latest identity for most of the episode, on account of it being a thirteenth regeneration that shouldn’t technically be possible, is very fun and well-crafted, and it’s very clever to reverse the perspectives, and have The Doctor be the one that’s more in the loop than River for a change. This is also a great reflection of the timelines between the two characters now shifting sides, as River’s final night with The Doctor begins to approach, before her fateful coming to the library that ends in her apparent demise, at least physically.

The only shakier element to this otherwise inspired idea is that Capaldi’s Twelfth Doctor still isn’t exactly subtle. Even when he spells out that he’s The Doctor, River never seems to put two and two together, despite being a highly intelligent character that often has no trouble identifying her husband. It’s only when it becomes dramatically convenient that River puts together that the man who has been tagging along with her for the course of the special is in fact, The Doctor, with a new face. This is hard to swallow, since The Doctor doesn’t really hide his identity well, and the fact that River is never so much as suspicious that the man she’s looking for is an awful lot like the one beside her, feels like too much of a stretch to be credible.

Fortunately, audiences likely won’t dwell on this, since most of the special is quite well-crafted. The main plot comes from The Doctor getting led to the human colony of Mendorax Dellora, in the year, 5343, by the TARDIS. After being stumbled upon by a kindly servant of a tyrannical king, played in a rather amusing role by Matt Lucas, The Doctor is mistaken for an esteemed specialty surgeon, and is led to the bedside of the dying tyrant ruler, who is apparently the new husband of River Song. River doesn’t recognize the Twelfth Doctor, who beseeches The Doctor to save her husband, much to The Doctor’s frustration. Things become even more sticky when it comes out that River is actually after an invaluable diamond that somehow ended up lodged in her royal husband’s skull, which the guy gets in earshot of as she reveals it. Since he’s a head atop an enormous, intimidating mech suit, that’s kind of a problem.

The way that the special played with the role reversal, again, was enormously clever, and made the episode so easily entertaining, in terms of both a focus on strong, amusing comedy, and some surprisingly poignant drama to close things off. It also allowed audiences to get a glimpse of River’s behaviour whenever The Doctor isn’t around, or whether she doesn’t recognize that he’s around. She appears much more flirty, amoral, and loose, making the character more morally grey than she’s been in a long while. When it later comes out that she wants to trade the diamond for a big payday to some nasty-looking aliens, things get all the more tense as well, particularly when River and The Doctor end up on a pleasure cruise designed specifically for genocidal villains. Yeah, those specialty villain vacations exist in the Doctor Who universe, for some reason.

Another strong point in this episode was the presence of Welsh comedian, Greg Davies as the special’s villain, King Hydroflax. Comically narcissistic and bloodthirsty, Davies effectively creates a villain that initially seems intimidating, but is quickly revealed to be an oaf, and yet another man that River effortlessly gets under her thumb in the end. Hydroflax’s head is removed from the giant mech suit early on, which humourously seeks replacement heads, while Hydroflax’s proper head is stowed in a bag by The Doctor and River. Why they even bothered to take the head onto the evil cruise is anyone’s guess, though the circumstances at least allowed River to make a badass exit, as a meteor storm strikes the ship at that exact moment, which River knew about in advance. She really says it best when she tells the villains upon their inquiry about the incident, “I’m an archaeologist from the future. I dug you up!” God, River is awesome!

This swell of excitement and victory effectively led to a surprisingly bittersweet and heart-wrenching ending, particularly for fans of River’s character. The Doctor and River take refuge in the TARDIS as the ship crashes into the nearby planet of Darillium, home of the Singing Towers of Darillium, which, if you recall from River’s debut in “Silence in the Library”, was the final place that The Doctor took River before her ‘death’ in the library. It seems that the adventures of The Doctor and River may sadly be at an end for good this time. The reveal that The Doctor gave the diamond to a salvage worker to build the restaurant where he took River for their last night however, and that the Sonic Screwdriver that River uses in “Silence in the Library” was actually given to her as a final gift by the Twelfth Doctor, was pretty cool though.

The special ends with The Doctor getting his first chance to tease River with the, “Spoilers” catchphrase, when she asks about why he’s looking sad. The two acknowledge that their eccentric relationship must one day end, but nights on Darillium apparently last for twenty-four years. This slightly leaves the door open for River to potentially return to Doctor Who again if necessary, though if this is truly her exit on the series, we couldn’t have asked for a more heartfelt and satisfying one for her. This was also an appropriate note for things to end on, as a line about the two living happily ever after fades out to gradually spell out, “Happily.” It really is the bottom line, even with River loving a man that’s equal to falling in love with the stars in the sky, or the great monolith of the Singing Towers.

Like “The Runaway Bride” almost a decade ago, Doctor Who finally recalls how to do a Christmas special right with, “The Husbands of River Song.” Its light-hearted focus made for a nice reprieve from the frequently heavy and emotional Series Nine, though not to the point where it came at the expense of the story’s credibility. The special also provided a great potential exit for River, even if it still wisely leaves the door a small crack open, not entirely ruling out that we may see River return to the series again in the future. Best of all though, is that this Christmas special re-affirms the promise of the show moving forward, with a new cast, and new companions, in 2016. That’s the best Christmas present that Doctor Who fans could ask for!

Doctor Who 2015 Christmas Special: "The Husbands of River Song" Review
Doctor Who's 2015 Christmas special is the show's best Holiday offering in nearly a decade, giving us a great reunion with, and potential exit for, River Song, while also nicely contrasting with the emotional weight of Series Nine, thanks to an effective emphasis on fun and humour.
THE GOOD STUFF
THE NOT-SO-GOOD STUFF
2015-12-28
88%Overall Score
Reader Rating: (0 Votes)
0%