If you’re among the many people who were bummed about Robbie Amell’s apparent exit from The Flash at the start of this season, then DC and The CW have some potentially good news for you. Amell is set to return to The Flash on an unspecified episode later this season! 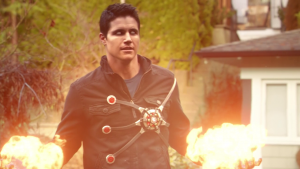 Viewers will be in for a very different Ronnie Raymond upon Amell’s return however. Rather than come back as the same old Ronnie Raymond, who seemed to perish during the Season Two premiere while stopping the singularity that was threatening to engulf Central City, Amell will this time portray the Earth-Two Ronnie Raymond. The alternate world placement is not the only major switch of the character now though, as Ronnie’s Earth-Two counterpart is actually a villain! Said villain will be known as Deathstorm, a deadly new evil version of Firestorm, a character that’s been featured on The Flash right from Season One, and is set to be one of the leads in the imminently-premiering spin-off series, Legends of Tomorrow.

DC Comics fans might recognize Deathstorm from his debut in the printed panels during the high-profile Blackest Night event, which resurrected several dead heroes (including Ronnie Raymond’s Firestorm, Bruce Wayne’s Batman, and a handful of others) as ‘Black Lanterns’, twisted, undead versions of their former selves that wreaked havoc on the pre-New 52 DC Universe. Deathstorm has similar nuclear-fueled abilities as Firestorm, though is distinct on account of the blue colouring of his flames. This twist was teased upon Ronnie’s death at the start of Season Two of The Flash, when Firestorm’s flames briefly turned blue, before the violent separation of Ronnie and Dr. Martin Stein that saw Ronnie killed, and Stein narrowly saved by The Flash after plummeting to the ground.

It’s also speculated that this evil version of Firestorm will tie in to the oft-teased villainous transformation by series lead, Caitlin Snow, played by Danielle Panabaker, who was married to Ronnie before he died. Snow is the current incarnation of ice-manipulating DC villainess, Killer Frost in DC Comics lore, and it’s believed that Caitlin’s Earth-Two counterpart is also an evil version of herself, who was transformed into Killer Frost, as with her comic book counterpart. Panabaker revealed the first official photo of herself in Killer Frost make-up during a recent talk show interview, and the midseason trailer for The Flash’s second season also briefly showed a second or two of Caitlin in Killer Frost mode. The Season One finale of The Flash also showed a quick flash of Caitlin as Killer Frost, while Barry was speeding through the space-time continuum to try and save his mother. 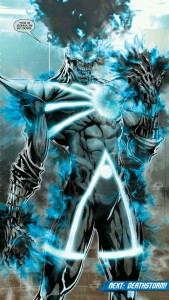 The Flash is currently on its midseason hiatus, though it will return to its usual 8:00-9:00 P.M. timeslot on Tuesdays, come January 19th, two days before the current Firestorm makes his debut as a lead on Legends of Tomorrow, premiering in the 8:00-9:00 P.M. timeslot on Thursday, January 21st. Both shows can be viewed on CTV for us Canadians, and The CW for our American neighbours.

Keep blazing to Eggplante for all news and updates on The Flash, and other developments in The CW’s DC Television Universe.