The Xbox One had no shortage of quality exclusives throughout last year, and 2016 looks to be continuing that steady trend of great games that are unavailable on any other platform. Unfortunately though, Microsoft is now down an exclusive for this year, as, just a few days into the new year, it’s sadly been confirmed that one of the Xbox One’s planned 2016 exclusives, PlatinumGames’ action-RPG, Scalebound, has been delayed into 2017. 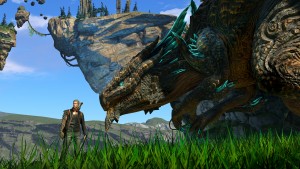 PlatinumGames addressed the delay immediately, citing that the game has grown to be more ambitious and challenging for the studio since its inception. Thus, they felt that the only way to properly realize the vision behind Scalebound was to push it out of 2016, allowing more time for development. PlatinumGames has pledged however to show significantly more of Scalebound throughout 2016, to help ease the extended wait for it.

Scalebound stars a protagonist named Drew, who travels with a dragon companion named Thuban. Drew and Thuban are bound together, and thus, if either dies, the other will perish as well. Players journey across the fictional, dragon-filled planet of Draconis during the game, upgrading and customizing their leads with a flexible real-time battle system, and using the ‘scalebinding’ of Drew to assess enemies, and keep Thuban healthy and strong, among other things.

Fortunately, the news wasn’t all bad from Microsoft today, as they announced that one of this year’s upcoming major Xbox One game releases, ReCore, will also be coming to Windows 10 PC’s this year, alongside Windows 10 ports of Killer Instinct and Gears of War: Ultimate Edition. Aside from ReCore and the third ‘season’ of content for Killer Instinct, Xbox One owners also have plenty of other exclusives to look forward to in 2016 that are already known, even with the loss of Scalebound this year, including Crackdown 3, Quantum Break, Gears of War 4, Cuphead, and various exclusive independent offerings under the [email protected] program, along with the expected batch of third-party multi-platform games set for throughout the year.

Keep summoning Eggplante for all news and updates on Scalebound.