The PC version of Rise of the Tomb Raider will be released physically at retail, as well as digitally via platforms like Steam, the Windows Store, and Square Enix’s own online marketplace. The game’s PC release will be available in three versions, including the standard edition priced at $59.99 USD, a Digital Deluxe Edition that includes the game’s Season Pass, priced at $89.99 USD, and finally, a Collector’s Edition that comes with the game, its Season Pass, replicas of Lara Croft’s journal and jade necklace, a steelbook case, and a 12” collectible statue of Lara, which will be $149.99 USD, and sold exclusively through Square Enix’s online store. Steam is also offering free PC copies of the original 2013 reboot of Tomb Raider to anyone who pre-orders the game there, as well as the Remnant Resistance Pack, which grants a ‘Remnant’ costume, animal skins, Byzantine Armor, the ‘Moon Shadow’ heavy pistol skin, and a foil card that reduces Lara’s damage when hit with gunfire.

On top of revealing the release date and trio of versions to buy, Square Enix also announced that the game’s PC version will feature 4K resolution support, giving it a considerable graphical advantage over its console cousins. Square Enix also revealed the minimum system requirements for Rise of the Tomb Raider on PC (its recommended specs are currently unknown), which are:

Obviously, while these requirements will be fairly reasonable for avid PC gamers, they’re not small either! You’ll need at least a mid-range gaming PC to even start the game by the look of things, as its GPU, RAM and processor requirements in particular pretty much demand dedicated PC gaming hardware that’s fairly recent in design, with the game requiring a modern DirectX 11 driver to function as well. Strangely though, the OS demands are a little more relaxed, as the game apparently even runs on Windows 7, let alone the current Windows 10. Bear in mind that these are just the bare minimum requirements to get the game to function on your computer as well! If you want the PC build of Rise of the Tomb Raider to truly outclass its Xbox One cousin from a technical standpoint, you’ll no doubt need a pretty beastly rig, even with the 4K advantage to consider! 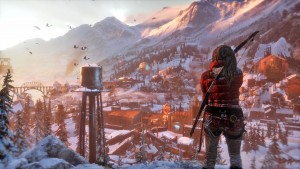 Keep exploring Eggplante for all news and updates on Tomb Raider.