Brooklyn Nine-Nine is back on Tuesdays for the start of its 2016 run, and the back half of its third season. Kicking things off nice and early was “Hostage Situation”, a midseason premiere that presented a big development for Boyle. Apparently, Boyle and Genevieve want to have a child together, after only dating for about three months. Given Boyle’s track record, that at least adds up on his end.

There’s quite the complication however, as Boyle is actually sterile, after a rather humourous incident of his testicles being smashed by a baseball bat (because he went in to an arrest crotch-first, you see), and the only sperm he donated happens to be the legal property of his ex-wife, with Boyle even signing a legal contract that gives Eleanor ownership of his sperm. Again, given Boyle’s track record, that adds up. This episode also finally allowed us to meet Eleanor for the first time after so many mentions of her throughout the series to date, played in an amusing guest role by Kathryn Hahn.

On the one hand, this main plot wonderfully capitalized on how spineless Boyle actually is, especially when it comes to women. Peralta getting roped along for the ensuing shenanigans also felt entertaining and fitting, particularly when Boyle inevitably betrays Peralta after he starts trying to talk sense into Boyle, which was an amusing callback to Boyle’s behaviour with Vivian back during Season One.

On the other hand however, despite the amusing setup of the comically despicable Eleanor trying to get Boyle to abuse his police power to talk an innocent old priest out of suing her, after she hits the guy with her car, the execution of the story seems to aggressively go against Boyle’s character. Boyle’s selfishness throughout this episode really feels like a stretch, especially when the show tries to hastily wrap up the plot at the end, with an obvious fake-out after Peralta lets Boyle out of his time-out. By the end, Boyle and Genevieve simply look for sperm donors anyway, making most of the episode’s main plot, sadly, feel a tad pointless. There is one amusing gag at the conclusion though, when the two appear to decide on Peralta’s father as their sperm donor, so that their child would be Peralta’s younger brother. Oh no! This is bound to pay off with big laughs in future episodes!

The rest of the episode featured two subplots, with one shared between Jeffords and Santiago, and the other shared between Diaz, Holt and Gina. This midseason premiere seemed to be all about comfortable, reliable pairings, and that’s fair enough, since every storyline seemed to have a good batch of funny jokes. The Holt/Diaz/Gina subplot particularly hits the ground running in terms of humour, as they try to interrogate a perp, with Holt deciding to try and threaten him by illustrating how faulty the municipal legal system’s website it is. This is easily the episode’s funniest running joke, and the most novel one to boot. 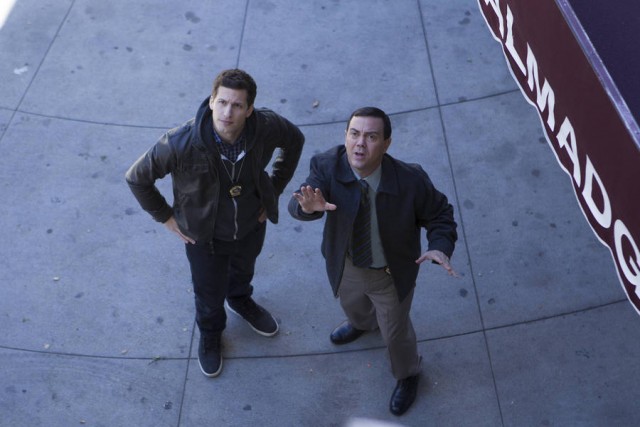 The execution with Gina was also pretty clever, where this proved to be the rare occasion where Gina actually wasn’t made to be an under-appreciated genius for once. Apparently, the guy will only talk to Gina, and it soon comes out that he was fond of her in high school, so Diaz and Holt decide to ask for Gina’s help to solve their case. What follows is typically funny Gina shenanigans, though it’s Diaz that ultimately wraps things up, bonding with the perp and getting the information after they complain about Gina for an hour. This was an unpredictable and inspired conclusion, and it made for a great way to wrap up the storyline. The reveal that Gina sometimes calls Diaz, “Gina” was particularly amusing, among the list of Diaz’s grievances with Gina around the office.

The Jeffords/Santiago subplot served to mainly function as a setup for future episodes, much like the resolution to the Boyle/Peralta plot seemed to. Santiago tries to convince Jeffords to write a letter of recommendation for a mentor/mentee club, though in the process of trying to impress him, she ends up badly hurting him. Santiago’s attempts to fix the situation only lead to more pain for Jeffords, and eventually, she’s rejected. Initially angry, and believing that Jeffords sabotaged her, we instead learn that Santiago wanted to be a mentee, not a mentor, and Jeffords simply assumed she wanted to be a mentor, actually writing her a positive recommendation of how capable she is as a detective. Things end with Jeffords making a call to set up Santiago as a mentor, and that’s where we leave things. Simple, but effective, especially with some of the great physical humour involved in Jeffords’ injuries!

“Hostage Situation” is a pretty funny episode of Brooklyn Nine-Nine to start 2016 off with, even if not Season Three’s best so far. The concept of the main plot didn’t totally mesh with Boyle’s disposition unfortunately, especially when it seemed to want to highlight Boyle’s cowardice, while at the same time also painting him to be an implusive dimwit, which didn’t totally make sense in practice. Everything else however was plenty amusing, and brought the show back to the airwaves on a good note. Brooklyn Nine-Nine will be missed on FOX’s Sunday night comedy bloc (especially with early press claiming that Sunday’s new FOX comedy pilots are apparently pretty lousy), but as a lead-in to The Grinder, it still seems to function pretty effectively.

Brooklyn Nine-Nine 3.11: "Hostage Situation" Review
Brooklyn Nine-Nine started its 2016 run, and its move back to Tuesdays, on a reasonably good note with "Hostage Situation", an episode that had a strong amount of inspired writing and good laughs, even if Boyle's selfishness proved hard to swallow.
THE GOOD STUFF
THE NOT-SO-GOOD STUFF
2016-01-05
82%Overall Score
Reader Rating: (0 Votes)
0%