Quentin Tarantino’s fascination with Westerns appears to be continuing in The Hateful Eight, ironically his eighth official movie. A throwback to Western stand-off plots where a group of characters of ambiguous moral alignment are trapped in a confined space together, The Hateful Eight is a highly suspenseful, oftentimes brutally shocking movie about human deception, and in true Tarantino fashion, it’s absolutely brilliant!

The Hateful Eight even manages to surpass the stellar Django Unchained to a small degree, being a contender for one of Tarantino’s all-time best offerings, even if it still seems to fall a tad shy of the director’s high point of Pulp Fiction. In fact, it’s actually kind of mind-blowing to think of how close The Hateful Eight came to not even being made, after some opportunists at Gawker decided to leak the script in 2014, rather tastelessly. This temporarily had Tarantino halting production, and refusing to make the movie, which delayed it out of its planned release window. Fortunately, Tarantino eventually reconsidered, with The Hateful Eight now gracing theatres, complete with being filmed in the retro throwback 70mm celluloid format, a format that hasn’t truly been used to fully shoot a movie since the release of Ron Howard’s Far and Away from 1992.

It’s great that The Hateful Eight was allowed to reach theatres, since the movie seems to succeed on almost every level. It’s a stark drama, a gripping suspense movie, a darkly hilarious comedy, and honestly, a pretty impressive Western to boot! Sure, film buffs will continue to get the most out of it, especially with The Hateful Eight standing firmly against most modern Hollywood wisdom in terms of its design, but the movie is nonetheless a creative and memorable endeavour, and one that deserves to be celebrated by moviegoers who aren’t afraid of something a little different.

Tarantino is one of the best filmmakers in the business when it comes to making outstanding original characters on the big screen, and The Hateful Eight’s titular lead cast doesn’t disappoint! The titular eight personalities comprise: A duo of bounty hunters, John “The Hangman” Ruth (played by Kurt Russell) and Major Marquis Warren (played by Samuel L. Jackson), a criminal marked for death, Daisy Domergue (played by Jennifer Jason Leigh), a mysterious wanderer claiming to be a lawman, Chris Mannix (played by Walton Goggins), and finally, a quartet of mysterious guests taking shelter in a stagecoach lodge, including British stranger, Oswaldo Mobrey (played by Tim Roth), Mexican stranger, Bob (played by Demian Bichir), cowboy stranger, Joe Gage (played by Michael Madsen), and Confederate General, Sanford Smithers (played by Bruce Dern). 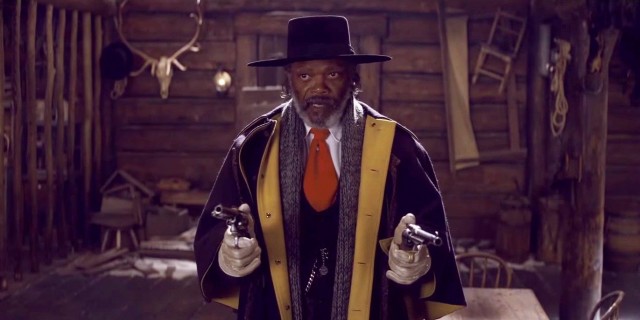 The movie doesn’t get to the all-important lodge right away, which actually doesn’t show up until the third of six ‘chapters’ in the movie (a setup that should be familiar to viewers of Tarantino’s 2009 movie, Inglourious Basterds most notably), but it nonetheless does a superb job of setting up its personalities. We learn snippets of facts about who each character is, and by the time the bounty hunters, criminal and apparent sheriff are brought in to the lodge with the other four strangers, viewers will have a great sense of each character’s backstory, even with mere snippets of fascinating details.

Things get all the more interesting however when it quickly becomes apparent that something is amiss. While every story sounds convincing, and every personality seems legitimate, there’s no denying that not everyone is who they say they are. Since a dangerous criminal is in their midst, and each personality has their own backstory of questionable intentions, The Hateful Eight quickly becomes sort of a whodunit for an incident that hasn’t even happened yet, which is quite fascinating. This also makes it a movie that’s especially dependent on knowing as little as possible about it before you go and see it, since The Hateful Eight is at its most entertaining when it can effectively take you by surprise. Even then though, subsequent viewings will yield cool little background references and actions that make the story come together all the better, with the movie sporting an excellent attention to even the smallest of character details. 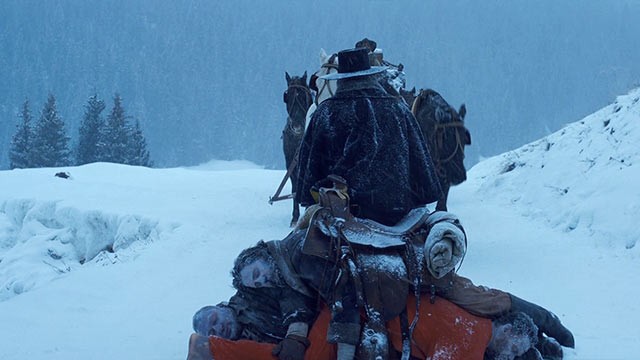 The Hateful Eight feels like the highest-cranked extension of Tarantino’s protracted shots and dialogue stylings, and it really plays to the filmmaker’s strengths in a great way. Even with the very small lead cast, with only a handful of supporting personalities ever showing up beyond the titular ensemble of eight, The Hateful Eight is packed with biting personality, and frequently exciting twists and turns. Its personalities easily measure up to Tarantino’s best, and will quickly endear themselves to audiences, even with everyone seeming to exist in an engrossing sense of moral greys.

The Hateful Eight’s storyline pans out over nearly three hours of runtime, and slightly over three hours in the case of the authentic 70mm roadshow screenings! Despite that epic length however, the movie doesn’t feel as long as it is. That’s a fantastic testament to how entertaining the movie is though, and how much it will consistently invest audiences and keep them on the edge of their seats, right up to the shocking conclusion that leads into the credit crawl.

Most fascinating however is that The Hateful Eight confirms an occasional fan theory about Tarantino’s Western-inspired movies, affirming that they do all take place in the same universe, despite sharing a handful of actors as different characters. Without spoilers, there’s a blatant tie-in to a character from Inglourious Basterds, while Tarantino himself confirmed after the movie’s release that The Hateful Eight does take place in the same universe as his previous movie, Django Unchained, even though the two movies have no direct link to one another’s events. In fact, The Hateful Eight actually began production as a sequel to Django Unchained, though was re-tooled when Tarantino felt that Django’s story had already been fully told. 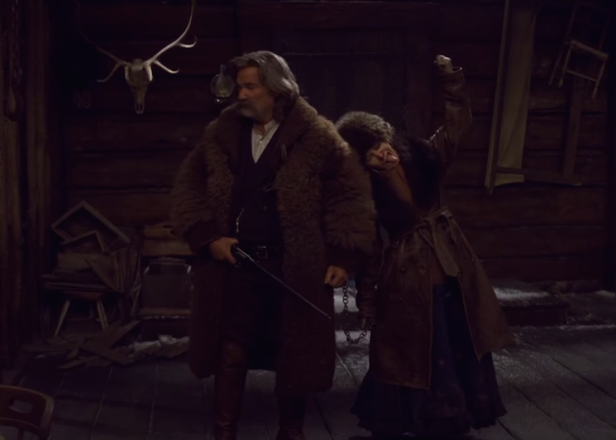 Django Unchained’s high-powered moral outrage seems to stand in stark contrast to the story of The Hateful Eight anyway, which offers a plot that is far more comically sinister and shady. Naturally, it feels right at home with Tarantino’s style, and feels like the closest that Tarantino has come to fully replicating the fascinating dark criminal shenanigans that first shot him to fame with Reservoir Dogs and Pulp Fiction. Whereas Inglourious Basterds and Django Unchained felt a little more wildly experimental, as did Tarantino’s Grindhouse offering, Death Proof, The Hateful Eight feels like a welcome return to the finest conventions of Tarantino’s eccentric playbook, with the Western backdrop cementing a perfect union between classic Tarantino, and modern Tarantino, within the riveting, violently amusing storyline.

Tarantino’s attention to detail, like I said, continues to be outstanding, and that’s something that really makes The Hateful Eight shine. There’s an intimate craftsmanship to how The Hateful Eight is conceived and executed, as if it’s a loquacious domino act that Tarantino is continually setting up to a perfect design in the background. Audiences can sense the dominoes lining up with every line and every action, but knocking them down isn’t limited to one display, nor just one turn in the story. In essence, the entertainment foundation of The Hateful Eight is simple, but the way it’s so elegantly calculated and paced makes it a masterpiece of suspenseful storytelling.

It also helps that Tarantino has a working history with almost all of the lead actors, with Jennifer Jason Leigh and Demian Bichir being the only exceptions. Michael Madsen, Tim Roth and Samuel L. Jackson show up particularly frequently in Tarantino’s movies, and you can tell that they have a very comfortable groove with their director at this point, palpably being energetic and having a great time, which helps to make their characters more endearing. It’s hard to believe that Jennifer Jason Leigh has never worked with Tarantino though, since she arguably delivers the movie’s best performance as Daisy Domergue, with Tarantino choreographing some wonderfully disturbing scenes with Leigh, even as they’re also brilliantly offset with some surprisingly hilarious moments of her character being roughed up by The Hangman, or simply exploding into over-the-top cackling whenever another character is inconvenienced or humiliated in some way. It makes Domergue an equally scary and amusing personality, and possibly of the best of the title ensemble. 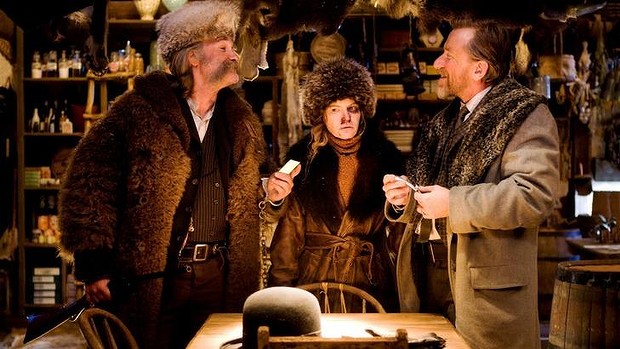 In fact, the only shortcoming in Tarantino’s vision is its odd insistence on the 70mm filming style. 70mm film offers the ability to better capture wide, sweeping landscape shots, adding a sense of framed scope to movies that might have otherwise appeared pretty modest in production values… Except, most of The Hateful Eight takes place in a confined lodge during a blizzard. This makes the 70mm style feel like an odd choice beyond simple nostalgia, since the claustrophobic presentation of the story feels at odds with the sweeping shots that most benefit from 70mm film. The only time that the style seems to be effectively used is right at the start of the movie, which does have a grand sense of environmental spectacle, even with the movie’s modest budget to consider. Beyond that, it feels like the 70mm print only exists to preserve Tarantino’s love of celluloid, and doesn’t actually provide any noticeable benefit to the audience past a certain point of the story.

Still, there’s no denying the incredible amount of painstaking, ingenious crafting that went into realizing The Hateful Eight from Tarantino, another reason why it’s sort of hair-raising to think of how close this movie came to being scrapped. It’s great that Tarantino put the vision to film though, since The Hateful Eight feels like it would be most well-realized in that medium. Sure, the style still could have worked as a novel or a stage play, but The Hateful Eight was conceived as a movie, and it should be a movie, especially when it so effectively brings to the table some of the masterful strengths of one of Hollywood’s most daring and beloved filmmakers.

The Hateful Eight is well worth the extended wait and production turbulence, since it’s another masterpiece to add to Tarantino’s catalogue of highlights. The interesting blend of genres and dark, giddy storytelling make for a movie far more bold and memorable than most other high-profile movie releases these days, and as I said, The Hateful Eight feels like a perfect marriage between classic Tarantino, and modern Tarantino.

In true Tarantino fashion, the movie is pretty damn violent, even if the violence is often played for laughs or spectacle, so those with weak stomachs, or a distaste for sadistic entertainment, might be put off by The Hateful Eight. If you don’t mind the pitch-black characterization and proudly deceitful storytelling style though, The Hateful Eight manages to close out 2015’s movie catalogue with one of its most memorable and creative offerings, even among the Tarantino library. 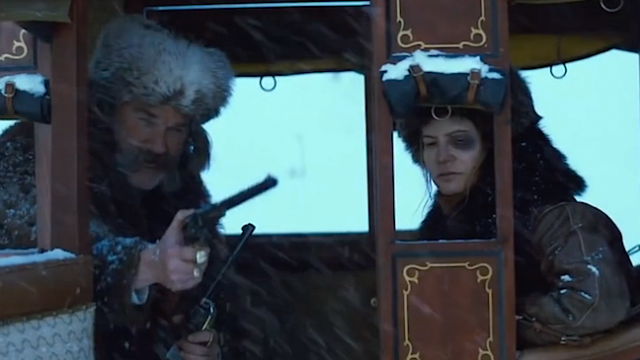 There’s little incentive to seek out one of the retro-style 70mm showings, since standard digital screenings work just fine, and the 70mm film advantage isn’t even used all that much, but nonetheless, The Hateful Eight demands to be seen by any adult with a passion for movies, and that’s especially true of established Tarantino fans. The movie may fall just shy of being Tarantino’s new best work, but it’s certainly a viable contender to be one of the director’s best works overall. This makes the title pretty ironic, since this ‘hateful’ movie is actually one of the easiest to love among Tarantino’s modern offerings.

The Hateful Eight Review
The Hateful Eight was very close to not being made, but it's good that it was, since it's arguably Tarantino's best modern movie offering to date, perfectly marrying the director's classic strengths with his bold, forward-thinking Western experimentation of the present day!
CHARACTERS95%
PLOT90%
DIRECTION90%
THE GOOD STUFF
THE NOT-SO-GOOD STUFF
2016-01-06
92%Overall Score
Reader Rating: (0 Votes)
0%