Speaking at the Television Critics Association Winter Tour today, Netflix officially confirmed when we can expect the second season of smash hit Marvel series, Daredevil to debut its second season on the streaming service. Despite a recent rumour that Marvel and Netflix were going to launch the series on March 25th, as a means of unofficially ‘competing’ with rival, DC’s blockbuster movie release of Batman v Superman: Dawn of Justice in theatres that day, this rumour is actually false. Daredevil’s second season will instead premiere on Netflix a week earlier, on Friday, March 18th.

The release date announcement was accompanied by a new teaser trailer for Season Two of Daredevil, which calls back to several sequences and characters of Season One in a church-like backdrop, before culminating in the glass windows of the church appearing to be shot out en masse. This appears to be a reference to the fact that Season Two of Daredevil will introduce Marvel anti-hero, The Punisher to the Marvel Cinematic Universe, where he will be a key antagonist of the season, played by The Walking Dead’s Jon Bernthal. Another Marvel anti-hero, Elektra, played by G.I. Joe: Retaliation’s Elodie Yung, will also be introduced to the MCU during the upcoming season.

Netflix has also debuted a teaser poster for Season Two of Daredevil, teasing the personalities that will be featured in the next batch of thirteen episodes, which you can check out below: 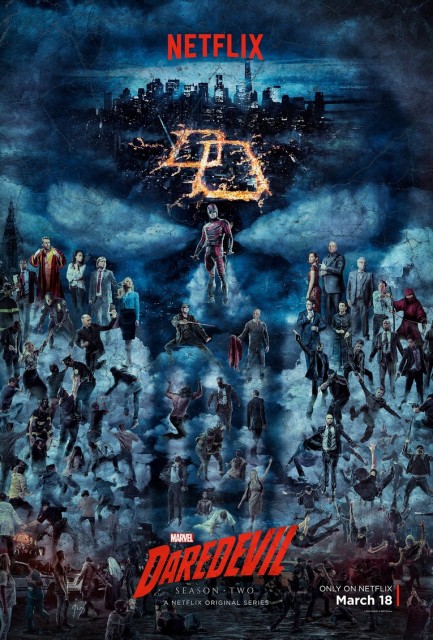 Sadly, there was no word on when we can expect Daredevil’s upcoming sibling Netflix series, Luke Cage to hit the streaming service, with that show’s debut season still scheduled for some unknown point in 2016. There was also no word on whether the other Marvel Cinematic Universe-set Netflix series from last year, Jessica Jones has been renewed for a second season, despite it being one of the most-watched and best-reviewed debuting Netflix shows of last year, alongside Daredevil.

Daredevil’s first season premiered last April, where it went on to become Netflix’s most popular and acclaimed original series, surpassing previous record holder, House of Cards by the end of the year. In response to this, Netflix has now made Daredevil their current marquee series, emblazoning the show all over the bulk of their advertising. We were also extremely fond of Daredevil’s first season in our official review from last April, where we awarded the season a stellar 96% score, praising its dark, violent storytelling, high-quality action, and brilliant cast of characters, in particular its lead villain, Wilson Fisk, a.k.a. Marvel’s bigwig crime lord, The Kingpin.

Keep sensing Eggplante for all news and updates on Daredevil, and other big developments for the Marvel Cinematic Universe.