If you were holding out hope for TNT’s stab at featuring a DC Comics-inspired drama series, Titans, then this year’s Television Critics Association Winter Tour brought some bad news from the network. Despite a pilot order, the pilot didn’t seem to turn out as the network had hoped, and the show wasn’t picked up. For all intents and purposes, Titans is dead. 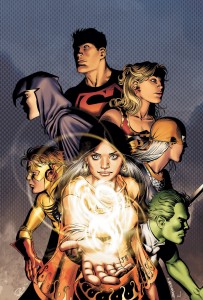 There’s a slim chance that the show could be shopped to another network, but considering that just about every major syndicated network has a successful DC Comics drama generating big ratings for them, between Gotham on FOX, Supergirl on CBS, Arrow, The Flash and the imminently-premiering Legends of Tomorrow on The CW, and NBC’s development of promising DC-inspired sitcom project, Powerless, it’s unlikely that another network would be interested. There’s always the chance that other premium networks like Starz, HBO or AMC could give the series a look, but again, this is unlikely, as HBO and AMC especially are not wanting for genre programming, having marquee shows, Game of Thrones and The Walking Dead, respectively, and Starz doesn’t appear to be interested in the DC stables.

Titans was inspired by DC’s highly successful series of Teen Titans comics, which revolve around a younger generation of superheroes that band together to form their own fighting force against evil. The aborted series was said to feature former Batman protegee, Nightwing as its lead character, with the supporting cast apparently consisting of Starfire, Hawk, Dove, Raven and Oracle, omitting certain fan favourites of the team like Cyborg (who is no doubt reserved for the DC Extended Universe movies, where he will be portrayed by Ray Fisher), and BeastBoy. Nightwing and Oracle’s inclusion apparently doesn’t step on the toes of FOX, who own the vast majority of television rights for Batman characters, on account of hosting Gotham.

Keep rallying Eggplante for all news and updates on DC’s television projects.