NOTE: Full spoilers for this Holiday special of Sherlock are present in this review

BBC series, Sherlock is not wanting for acclaim and popularity, even here in North America. This is why the extended wait for new episodes of Sherlock, which have seen an especially lengthy delay since Series Three aired in 2014, is often so difficult. Series Four apparently won’t hit the airwaves until 2017, though to tide over viewers, the showrunners have delivered a Holiday special for the series, which explores a ‘what if?’ scenario, demonstrating how Benedict Cumberbatch’s Sherlock Holmes and Martin Freeman’s John Watson might have appeared and functioned in the source stories’ setting of Victorian-era London.

It’s an interesting and clever idea for an experimental one-off offering, since we still have over another year to wait for the next proper trio of Sherlock episodes set in present-day London, England. While the special screened early in the U.K., the episode, “The Abominable Bride”, has only now screened in North America this week, both on the small screen, and in select movie theatres. As great as it is to reunite with Cumberbatch and Freeman’s mystery-solving duo after all this time however, “The Abominable Bride” only feels half-successful, as an experimental spin on the beloved show.

In terms of presentation and the mechanics of the overarching mystery, “The Abominable Bride” is fantastic. The Gothic Victorian atmosphere is portrayed brilliantly, and the central story character of the titular bride is both terrifying and memorable. It’s very cool to see the show tread more closely than ever to the source stories by Sir Arthur Conan Doyle, especially when it also effectively plays with their legacy, showing things like Molly Hooper as a poorly-disguised male coroner, and Mycroft Holmes as a morbidly obese government official who gets his kicks by betting how quickly his bad eating habits will kill him. These little nods to the differences of the modern world versus the Victorian world create some pretty amusing humour throughout the special.

That’s why it’s kind of unfortunate that the special tries to throw in a pretty big twist towards the third act, which is brilliant on paper, but somewhat derails the storytelling in execution. Apparently, the entirety of the episode’s Victorian sequences take place within Sherlock’s mind palace, with Sherlock taking drugs before he got on the plane right at the conclusion of Series Three, when Moriarty’s face became plastered all over U.K. television screens, seemingly confirming that he’s alive, and somehow survived shooting himself in the head at the end of Series Two. This makes the stakes of the mystery purely about Sherlock trying to reconcile his fear and uncertainty around the fate of Moriarty, with Andrew Scott reprising the role as Moriarty’s continued influence, being the ‘virus’ in Holmes’ brilliant mind.

On the bright side, the interactions between Cumberbatch and Scott remain excellent, with Moriarty being as lovably kooky as ever, even if he looks the least remarkable out of the modern personalities’ translations to the Victorian era. We even get to see the two have their fateful confrontation at Reichenbach Falls, which infamously killed off the duo of Holmes and Moriarty at the end of Sir Arthur Conan Doyle’s original Sherlock Holmes mystery stories. This is a cool moment, though with the knowledge that everything outside of the plane area takes place solely in Sherlock’s mind, the stakes of the battle are somewhat derailed, and that’s unfortunate. 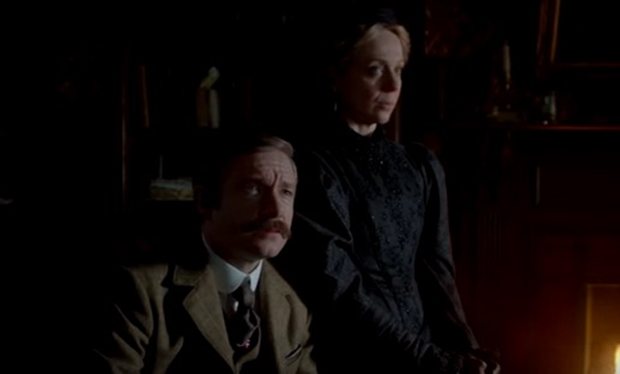 Likewise, there’s a pretty neat resolution to the mystery, with the bride being a ‘boogeywoman’ of sorts that was invented by London’s women of the era, who operate in an underground club of their own design, trying to push womens’ rights by frightening men into submission. It’s a very interesting idea, and one that the episode effectively foreshadows, namely through various women asking Watson, who writes the Holmes stories for magazine, The Strand in this era, why he never talks about them. This is another way that the show effectively plays with the original Sir Arthur Conan Doyle stories, but again, the mystery has no real stakes, since it’s all taking place in Sherlock’s mind. Whether or not Sherlock actually solves the mystery of The Abominable Bride, it makes no difference, since the conclusion of the special would play out the same way.

Making matters worse here is that solving the mystery simply has Sherlock declaring to Watson, Mycroft and Mary in the present day that no, Moriarty is definitely dead. Something else must be going on. Well, what was the point of this special then? Like I said, we’re in the same place that we started in, with the special ultimately failing to set up Series Four in any meaningful way. There’s always the possibility that Sherlock is lying, and that he may have an idea of how Moriarty survived in truth, and could be withholding the information until he knows for sure, especially as the special establishes that Moriarty’s body was never recovered after Series Two’s conclusion. This still doesn’t change the fact that the special ends with a whimper and not a bang though, ultimately serving a lot less purpose than it should.

As a neat ‘what if?’ experiment, “The Abominable Bride” is pretty good, but as a new episode of Sherlock, it’s a bit disappointing. There’s enough to like about the special to make it worth checking out for fans of the BBC series, but in terms of getting people psyched for Series Four, and providing an airtight story on its own merits, the special unfortunately falls short. Like I said though, any time with Cumberbatch’s Sherlock and Freeman’s Watson is time well spent, even if the two have certainly had more exciting and impactful adventures together in seasons past.

Sherlock 2016 Holiday Special: "The Abominable Bride" Review
Sherlock's one-off New Year special, "The Abominable Bride" is sound in presentation, and often humourous and clever in its storytelling, though as a tie-in to the main series, it's sub-par, and ultimately fails to set up for Series Four in any meaningful way.
THE GOOD STUFF
THE NOT-SO-GOOD STUFF
2016-01-09
77%Overall Score
Reader Rating: (0 Votes)
0%