DC Comics fans suffered a bit of disappointment at this year’s Television Critics Association Winter Tour, when network, TNT confirmed that their planned DC drama series, Titans is now dead in the water, after its pilot was passed on. Fortunately, it wasn’t all bad news for the DC faithful though, as NBC confirmed at the current TCA tour today that they are moving ahead with development on Powerless, their planned DC Universe-set half-hour comedy series, the pitch of which was revealed to the public a few months ago. The network also confirmed that they are developing three other projects for the upcoming television season alongside Powerless, all of which appear to be comedies, with one coming from Marlon Wayans, and two coming from former 30 Rock writers, Tracey Wigfield and Matt Hubbard. 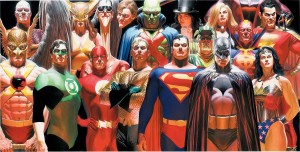 While Powerless hasn’t been formally picked up at this point, NBC has now commissioned a pilot order for the series, which they’re grooming to be a high-profile new show for the 2016/2017 season. NBC previously gave the show a pilot commitment according to insider reports, making this announcement a formality for the most part, though the network still could have changed their mind on the series, should it have really appeared to be sub-par. Should the pilot be satisfactory, it’s looking pretty likely that Powerless will be part of NBC’s television lineup this Fall.

Powerless is a workplace sitcom, NBC’s current bread-and-butter genre, between highly beloved legacy shows like The Office, 30 Rock and Parks and Recreation, along with the network’s recent high-rated debut for minimum-wage comedy show, Superstore, which formally hit the airwaves this week. The proposed series is set within a new, self-contained variation of the DC Universe, and involves the white-collar struggles of an insurance firm that works with managing incidents related to powered people, and most notably a few recognizable DC Comics personalities. While it’s confirmed that the show will feature certain recognizable B-list and C-list DC personalities for fans of DC Comics (though the leads will likely be original personalities that weren’t a part of DC Comics lore beforehand), NBC has also clarified that triple-A DC heroes like Superman, Batman, Wonder Woman and The Flash are sadly off-limits, due to being reserved for DC’s upcoming feature films, or competing DC Comics-inspired shows on other networks, or in the case of The Flash especially, both.

DC’s efforts to launch a superhero-themed sitcom at NBC has also motivated rival, Marvel to develop their own superhero-themed sitcom for the upcoming television season, Damage Control, this time for ABC. Damage Control will adapt the beloved comic book series of the same name (so, unlike Powerless, it has a direct comic book source to draw upon for its characters and scenarios), and is planned to inhabit the Marvel Cinematic Universe shared between Marvel’s in-house movies and television shows, being a blue-collar alternative to the white-collar Powerless, and centering on workers who directly clean up damage caused by super-powered folks. While ABC nor Marvel Television has offered any updates on Damage Control since announcing the pitch, a mere few days after Powerless was revealed to the public, it’s likely that we’ll get a status update on Damage Control over the next couple of days, when ABC takes the spotlight during the current TCA tour.

Keep organizing Eggplante for all news and updates on Powerless, and other high-profile television projects from the DC Universe.