The CW’s DC Television Universe is set to expand like never before when Legends of Tomorrow begins airing on January 21st. The show will be used as a vehicle to introduce yet more DC personalities to The CW’s shared television canon, and today has brought with it confirmation of another recognizable DC hero that’s set to come to the series. Apparently, Old West gunslinger, Jonah Hex is set to make his debut on Legends of Tomorrow, with the chance to re-appear in a recurring capacity. 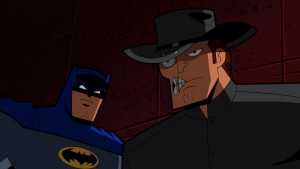 Hex will be introduced in the first season’s eleventh episode, which will predictably have Rip Hunter bringing the title heroes back in time to the Wild West. It’s speculated that Hex may end up coming back with the heroes to the present day by the end of the episode, which may explain how he can recur in the series. The role of Jonah Hex has not yet been cast however.

Jonah Hex previously headlined a standalone feature film in 2010, aptly titled, ‘Jonah Hex‘, where he was portrayed by Josh Brolin. Characterized by a hideous facial scar, Hex is a grizzled bounty hunter from the Old West with no superpowers, but a keen sense of danger, expert tracking abilities, and outstanding marksman capabilities, along with an unyielding code to protect the innocent from outlaws. While he’s often the subject of Old West-set tales, which have been a staple of his character since his debut in DC Comics’ All-Star Western #10 in 1972, Jonah Hex has time-warped to the present day in several helpings of DC media, most notably teaming up with Batman on more than one occasion.

Legends of Tomorrow will air on CTV here in Canada, and The CW for our American neighbours. While the American broadcast will air from 8:00-9:00 P.M., the Canadian broadcast will actually air from 8:30-9:30 P.M., on account of CTV hosting mega-hit comedy series, The Big Bang Theory in its 8:00-8:30 timeslot.

Keep tracking Eggplante for all news and updates on Legends of Tomorrow, and other big developments in The CW’s DC Television Universe.