The Devil himself has come to Los Angeles, and the result is a mostly decent start to what looks to be an entertaining new comic book-inspired procedural dramedy. Yes, Lucifer is joining the gold rush of primetime television shows inspired by comic books, in this case being adapted from the Lucifer graphic novels from DC Comics’ Vertigo imprint, with the Lucifer comics in turn being a spin-off to Neil Gaiman’s highly beloved Sandman comic. DC seems to go back and forth as to whether or not Lucifer takes place in the mainstream DC Universe, despite being a Vertigo graphic novel, particularly since Superman appeared in the series at one point, though it’s fair to say that the TV adaptation is fully self-contained, and clearly doesn’t operate with any kind of connection to DC Comics.

In fact, Lucifer doesn’t have much to do with its source comics in general, and it’s almost weird to think about it being an adaptation of a graphic novel that spawned from the masterpiece of Neil Gaiman’s Sandman. That’s why it’s perhaps beneficial that the series doesn’t seem to be a full-on drama, and like The CW’s competing Vertigo-inspired comic book drama, iZombie, Lucifer seems to operate as much as a comedy as it does a drama, sprinkling liberal doses of jokes and tongue-in-cheek charm.

This is due largely to the fact that Tom Ellis’ Lucifer Morningstar, the former leader of Hell who has grown bored with the underworld, and has since retired from it it to open a nightclub in Los Angeles (one of the only major story points that the show maintains from the source comics), takes pretty much nothing seriously. Why should he? He’s the Prince of Darkness! He’s supposed to be an active mockery of God’s work anyway. Lucifer’s comical apathy towards mortal affairs, and his tendency to whittle away immortality by bringing out people’s forbidden thoughts and desires (even if he clarifies that he can’t actually make people sin or do bad things in this universe, and that this is a misconception about him), is strangely compelling and infectious.

One of the big strengths of Lucifer is that you know you’re not supposed to like the titular protagonist, because he’s, you know, The Devil himself, but you can’t help yourself. The character of Lucifer is so charming, and so irresistible in his sense of mischief and sex appeal, that you can’t help but find him likable in his own twisted way. Tom Ellis embodies this superhuman charm perfectly as well, making Lucifer appear to be a devil-may-care playboy that gets his kicks from playing head games, and flaunting his power to charm people. That perfectly goes along with this variation of The Devil, since, as he states, he can’t control people. He’s the ultimate seducer, merely making people say and do things that they’re too shy, reserved or sensible to say and do without his suggestion. Lucifer can’t make you do anything that you don’t already want to do, and already, he’s a complex, interesting, and most importantly, entertaining protagonist for this new show.

What lets Lucifer down somewhat in its pilot episode, though not fatally, are the weaker police procedural elements. The superb character of Lucifer is forced to be teamed up with a much less interesting cop heroine, Lauren German’s Chloe Decker, who seems to be the only woman that’s completely impervious to Lucifer’s charm. When a woman close to Lucifer gets murdered, and Lucifer conducts his own investigation, Chloe quickly grows suspicious of Lucifer, and even tries to arrest him at one point, though, unsurprisingly, you can’t put The Devil in handcuffs. This acts as a contrived mechanism to make the two yet another police procedural team, which primetime television already has scads of.

Lucifer’s pilot episode also seems to go back and forth on whether or not it is indeed a police procedural, or is a more fantastical show about the dynamic between Heaven and Hell, and how that balance is being upset by Lucifer’s stay on Earth. Granted, it’s possible that the show could elevate itself above being a simple police procedural by balancing a great over-arching struggle for the lead character that services the narrative and doesn’t become dependent on a simple case-of-the-week format (The CW’s iZombie and CBS’ Limitless are great examples of procedural shows that are better than most because of this higher ambition). For now though, we get mere teases of a greater fantasy element to come, courtesy of D.B. Woodside’s gritted, gruff angel, Amenadiel, who slows down time to hassle Lucifer about returning to Hell and performing his duties as the ruler of the underworld a couple of times in the pilot.

For now though, we’re mostly stuck with solving the murder of Lucifer’s singing protegee, who had a bit of a drug problem, and naturally, there’s plenty of suspects for the drive-by shooting that ended with her dying, after Lucifer uses his powers to temporarily question the dead assassin, who is just a hired gun for someone else. After some tedious, mostly uninteresting police work, the culprit is revealed to be a movie soundtrack manager who killed the woman to drive up sales of her record, which leads to Lucifer’s immortality allowing him to punish the bad guy, even as Chloe is wounded in a brief gunfight. Lucifer however makes sure she makes a full recovery, which Amenadiel says is hurting the balance of the world, strangely suggesting that Lucifer needs to be an evil torturer to keep the world spinning, which is an interesting suggestion.

You meet a few supporting characters over the course of this debut episode to round things off, including Chloe’s douchey ex-husband, another detective named Dan, played by former Arrow star, Kevin Alejandro, plus Chloe and Dan’s adorable, yet strong-willed 7-year-old daughter, Trixie, and finally, a sexually repressed therapist, Linda, played by The Hangover’s Rachael Harris, who Lucifer agrees to have sex with after ‘loosening’ with his charms, in exchange for some help with his existential crisis. They’re a fair enough batch of supporting mains, with Trixie and Linda at least being quite entertaining themselves, and definitely more interesting than Chloe and Dan so far. Nonetheless, Lucifer himself is still the main draw of the series, and that’s probably how it should be. 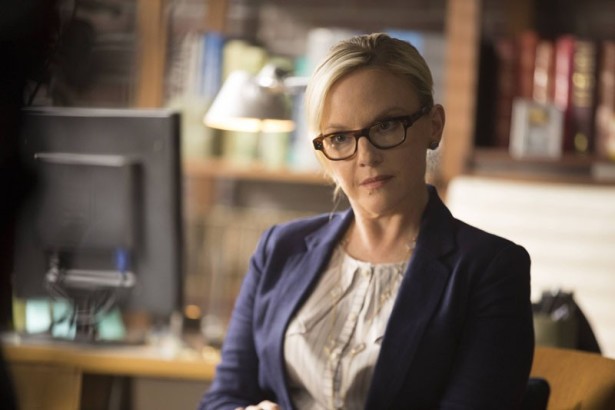 So, is Lucifer worth tuning in to then? Well, it’s one of the less remarkable comic book shows for primetime, but if you dig the main character, or the premise, then this pilot episode is pretty solid, and seems to lay the groundwork for a reasonably entertaining show. It seems inevitable that the source comics will be superior for now, unlike iZombie, which seems to be surpassing the appeal of its source comics with gaping strides at its best, but Lucifer is still a worthy addition to the growing stable of comic book-inspired primetime shows, even if it’s surviving completely on the appeal of its magnetic main character for now.

Pilot Review: Lucifer
The debuting episode for new Vertigo/DC Comics drama series, Lucifer is an entertaining one, despite forcing some tired police procedural elements, though it's easy to forgive this when the main character is so compelling.
THE GOOD STUFF
THE NOT-SO-GOOD STUFF
2016-01-26
80%Overall Score
Reader Rating: (0 Votes)
0%