You just can’t keep a good arch-nemesis down in the world of The Flash, and true to its title, “The Reverse-Flash Returns” was all about Eobard Thawne making a very surprising comeback to the DC Television Universe. Despite Eddie Thawne committing suicide in the Season One finale, which seemingly erased the Reverse-Flash out of existence, Reverse-Flash is active once again in the present, which Wells attributes to, “Time Remnant”, in that the Reverse-Flash’s skewed timeline is still playing out, which means Eddie’s death no longer changes the Reverse-Flash’s existence, since this is technically the character’s origin and past.

The return of Reverse-Flash already feels like enough drama and villainy to go around, but the episode’s subplots didn’t disappoint either. After the excellent midseason premiere last week, “The Reverse-Flash Returns” once again proved to be a smash hit offering, and another contender for one of the season’s best episodes overall. Even as The Flash is desperately trying to apprehend Reverse-Flash, Barry must still deal with Patty leaving for Midway City in his civilian identity, while the West family must also prepare to say goodbye to a dying Francine, and Caitlin continues to struggle against the seemingly inevitable death of Jay. Grief and accepting the inevitable was a big theme on this week’s episode of The Flash, and the outstanding drama throughout the episode had the show capitalizing on it perfectly!

The whole discovery of Reverse-Flash’s return comes when Wells upgrades Cisco’s virtual goggles to amplify his vibe abilities, discovering that they become their strongest when Cisco has a rush of adrenaline, usually from fear. The chance to briefly see Tom Cavanagh in the Reverse-Flash costume once again was a nice jab at the actual return of Reverse-Flash, who is now just plain old Eobard Thawne in the flesh, since he has yet to possess the Earth-One Wells in the past within his unfolding timeline. When Cisco sees that Reverse-Flash has kidnapped Tina McGee, and is forcing her to build a tachyon machine so that he can return to the future, Barry rushes to the scene, though fails to stop Reverse-Flash before he gets away with Tina.

Predictably, the return of Reverse-Flash sets up a wellspring of emotional angst for Barry, now more concerned than ever that Patty will be in danger if he comes clean to her about being The Flash. Barry would rather let Patty leave him than put her in danger, and the emotional exchanges between Barry and Patty really are heart-wrenching to watch. Things heat up all the more when Patty puts together that Barry is The Flash after looking at his old case files, and realizing that he knows too much about Flash-related incidents, and Detective West is unable to deflect her suspicions. After confronting Barry about being The Flash, Barry continues to lie about his identity however, resulting in a tearful and pained goodbye from Patty, with her departure to Midway City now set in stone. Is Barry making the right decision? It’s tough to say, and that’s why this moment was so wonderfully powerful.

Another great series of twists and turns comes when Cisco appears to vibe Tina’s death at the hands of Reverse-Flash, only to realize that the clock is wrong when Wells points it out, revealing that Cisco actually saw a vision from the future. This allows Barry to rush to the scene and save Tina just in time, successfully capturing Reverse-Flash, and throwing him in the pipeline. This leads to Cisco sustaining nosebleeds that eventually lead to convulsions however, as his brain is becoming overloaded with electrical energy, and he starts phasing in and out of other dimensions. In capturing Reverse-Flash, Barry messed up the timeline, and because of that, Cisco will die if Barry doesn’t let his greatest nemesis go. Forced to make a very difficult decision, Barry lets Reverse-Flash return to the future to save Cisco, allowing Reverse-Flash’s origin story to keep its course. This was a great example of Barry having to make a big sacrifice for the greater good, and as Detective West points out, it’s the foundation of why The Flash will still be considered great, even centuries in the future. 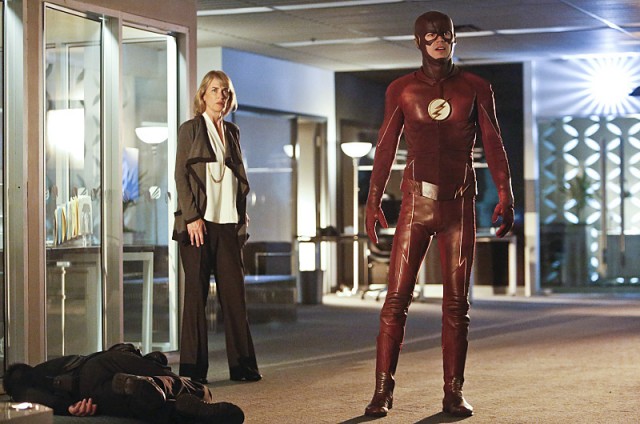 Things wind down with Patty calling in a fake gunman threat on her train to Midway City, which Barry naturally rushes to immediately, only to see that everything is fine. It’s here that he indirectly comes clean about his identity to Patty at long last, un-blurring his face, and allowing the two to make their peace as Patty leaves. It’s a bittersweet final scene to end the episode on, and Barry not getting a full victory with Patty’s departure felt heartbreaking, but also dramatically satisfying.

As for the subplots, the material with the West family was once again very good this week. We got some more brilliantly emotional scenes here, as Iris sees her dying mother one last time, forgiving her for her transgressions against the family, and when Wally doesn’t show up, Iris urges Wally to do the same. It takes some convincing, but Wally eventually musters up the courage to see his mother, even if he and Iris go to do this off-screen. It might have been nice to have the episode show this event in proper detail, but I suppose that this is a pretty crowded and highly dramatic episode already.

Lastly, Caitlin and Jay have a subplot of their own, with Caitlin noticing that Jay doesn’t seem to have a doppelganger on Earth-One. After Caitlin presses the issue, Jay eventually takes her to a park, where they witness Jay’s doppelganger living peacefully. Unlike most cases though, Jay’s Earth-One doppelganger is not Jay Garrick. He’s actually named Hunter Zolomon on Earth-One, with this version bouncing around foster care after his mother died in childbirth. Yes, if you’re a DC Comics fan, this is no small reveal, as the show basically just gave a huge hint as to the identity of Zoom! In DC Comics, Zoom’s civilian identity is Hunter Zolomon, so it will be interesting to see if the Earth-One version of Jay is actually this season’s big bad, and Caitlin and Jay had him right under their noses!

The Flash is absolutely crushing 2016 so far, and “The Reverse-Flash Returns” is yet another excellent episode to continue Season Two with. All of the lead characters delivered especially standout performances this week, with some superb drama to be had by virtually all of the lead personalities. Barry having to compromise with both Patty and Reverse-Flash was particularly bittersweet, as Barry had to think of both the future and the greater good, and not just make calls based on how things can most benefit him. He’s a more responsible and inspiring hero than ever, and that’s a big part of the reason why his show is currently one of the best on the airwaves!

The Flash 2.11: "The Reverse-Flash Returns" Review
The Flash once again dominated this week, delivering standout drama for all of the lead characters, especially Barry, who is once again forced to confront his greatest nemesis, just as he's forced to also let go of the woman he loves.
THE GOOD STUFF
2016-01-27
94%Overall Score
Reader Rating: (1 Vote)
100%