Doug Judy is back again! As with the two offerings from the previous seasons that featured Peralta’s arch-nemesis, Doug Judy, a.k.a. the Pontiac Bandit, Season Three offers a surprise return by Craig Robinson to Brooklyn Nine-Nine for at least one appearance for the season, seeming to confirm that Judy is indeed being positioned by the showrunners as a once-per-season treat. As with his previous two appearances, Judy’s character is a huge good luck charm as well, as, “The Cruise” is a fantastic episode, and one of Season Three’s best yet! Even the subplots were winners all around!

The main plot of the episode involves Peralta and Santiago taking a cruise together, which Peralta won at random, despite not entering any contests. This fact is wisely kept secret until after Peralta and Santiago stumble into the, “All-Ages Piano Bar”, where Peralta is shocked to see the ever-elusive Doug Judy playing piano and singing for the crowd. Turns out, Judy was the one who sent Peralta the free cruise tickets, and did so because an attempt is being made on his life, or so he claims. Since Peralta and Santiago are in international waters, they can’t arrest Judy, and have no choice but to believe him, making a great foundation for the re-introduction of this one criminal that just seems to keep getting away from Peralta’s clutches. 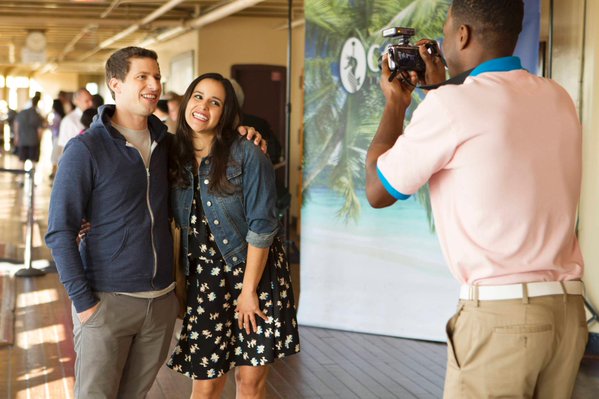 Helping the episode further is that the clashing personalities of Peralta and Santiago’s ideas for a vacation, and Judy tagging along with all of their activities, only gets funnier with each passing minute. Seeing things like Peralta playing Shuffleboard and Santiago being told she has to have sex with Peralta while Judy is in the room (though it’s ok because he has a mask and noise-cancelling headphones), is very amusing stuff. It was also even funnier to hear Judy talk about Peralta like they’re best friends, and have nothing but respect and admiration for each other, something that naturally angers Peralta continually, even as he’s once again inevitably sucked back into the charms of Judy and his ‘cool guy’ persona.

The best surprise of the episode however was definitely when it turned out that Judy was actually telling the truth! Someone really was trying to kill him, and he genuinely wanted Peralta to have a good time and appreciate Santiago with a free cruise. Peralta and Santiago apprehend the would-be assassin together, though Judy, yet again, gets away, just barely slipping through Peralta’s fingers for the third time. After taking off on a lifeboat, Judy thanks Peralta and says he still can’t go to prison, but that he hopes Peralta and Santiago enjoy the free cruise. Peralta then hilariously and futily declares to Judy that he will hunt the Pontiac Bandit to the ends of the Earth. It’s hard to complain about the free cruise though, even if the episode ended on the hilarious note of having Peralta and Amy say that they love each other during a salsa dancing class, only to soon after realize that they’re in a fitness class for widows. Just hysterical!

Back at the precinct, two equally hysterical subplots carry the episode very nicely, with one involving Holt’s melodramatic sister coming to New York to visit, played in a great guest role by Scream Queens’ Niecy Nash, and the other having Boyle and Diaz feud over an attractive apartment that is now vacated after the old woman that lived there appeared to die of natural causes. Both of these subplots are packed with high-quality laughs, with Nash’s guest stint being a particular highlight, and hopefully not the last time we see her on this show.

Gina and Jeffords provide support for Holt, doing whatever they can to run interference with Holt’s sister, who quickly becomes exhausting, even driving Holt to secretly drink seltzer in the dark when he truly becomes fed up with her. Gina comes up with the ridiculous suggestion of fighting drama with drama, leading to Holt commissioning the two to play up his work life to be soap opera-level ludicrous in terms of anguish. The strategy almost seems to work, until Holt learns that his sister’s husband left her, and was even having an affair, and that was her real reason for coming to visit. This has Holt feeling remorseful, and the plot ends with Holt revisiting his childhood by building a fort of confidence in his office, to discuss his sister’s feelings with her. It was a very sweet ending, and it capped off a very funny subplot perfectly.

The remaining subplot with Boyle and Diaz was a side-splitter as well, with their ridiculous rivalry also managing to steal the episode whenever it’s featured on-screen. These two had perhaps the best gags and most memorable lines of the entire episode, particularly when they fail to get the apartment from the building manager, which Rosa angrily responds to by saying that she smiled at the man, and now has no idea why. It’s sort of hard to believe that Boyle was head-over-heels in love with Diaz during Season One, but boy, did these two prove to be astonishingly funny foils to one another! It was also an interesting twist to cap off the subplot by having the building manager responsible for actually murdering the old woman who died there, after a toxicology test in the autopsy showed that she was poisoned. After arresting the guy, Boyle and Diaz vow to fight for the apartment again, even if they begrudgingly have to observe police procedure with their perp together first. You know, I sort of hope this comes up again in a future episode. Diaz did say that she’d help Boyle look for a new place, so it’d be a very amusing twist if these two ended up living together!

Brooklyn Nine-Nine has really been firing on all cylinders lately, and “The Cruise” achieved yet another new high point for a Season Three hot streak since around the end of the show’s 2015 run. The re-appearance of Doug Judy in such a surprising setting was fantastic, and the subplots continually punctuated the episode with lots of high-quality laughs. All three plots seemed to end on the perfect notes as well, especially since a hopeful Season Four seems to have Judy once again poised to eventually come back and vex Peralta, having audiences doubled over all the while!

Brooklyn Nine-Nine 3.13: "The Cruise" Review
Brooklyn Nine-Nine's recent hot streak soars to a new high point with the latest return of the Pontiac Bandit, and also thanks to two equally hilarious subplots which perfectly punctuate the episode with a great mix of humour and heart.
THE GOOD STUFF
2016-01-27
95%Overall Score
Reader Rating: (0 Votes)
0%