Star Wars: The Force Awakens actor Daisy Ridley has posted what is believed to be the first actual photo of the script for Star Wars: Episode VIII (tentative title).

The 23-year-old posted the photo below to her Instagram account, and while at first glance, there isn’t much going on other than a bouquet of flowers, there is something to be said for the lower quarter of the photo. 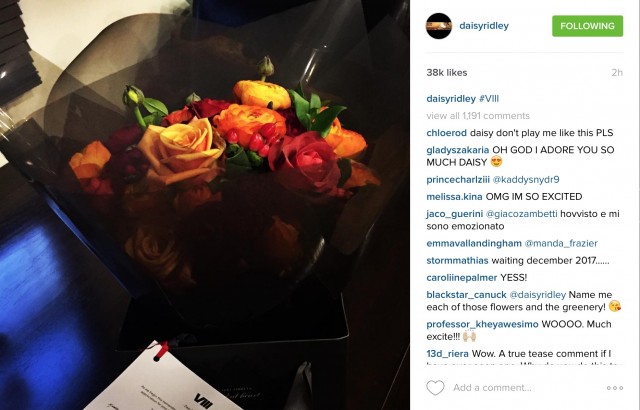 Ridley’s caption on the photo is #VIII, inciting riots among many a Star Wars fan.

The front page of the script simply has the roman numerals VIII–written in the Star Wars font, of course–and a short message that appears to be from the production team. As the message is cut off, we can only read parts of it:

As we begin this tremendous …

Beneath the message, which likely reads something akin to, “As we begin this tremendous journey, we have nothing but appreciation for the work you’ve done,” is producer Kathleen Kennedy’s signature, presumably alongside other signatures from the production and writing teams.

We’ve known that the script for Episode VIII has been done for a short while now, and while it is still likely to go through many small revisions before the film’s release in nearly two years, it’s pretty insane to think that the fate of the next episode of Star Wars has already been decided.

Check out a close-up of the script below. Star Wars: Episode VIII releases into theatres on December 15, 2017.