Superstore returned focus to the Amy/Jonah dynamic a bit more this week in “Color Wars”, an episode that had all of Cloud 9 battling for sales supremacy! Unsurprisingly, many of the employees are in need of spare cash, particularly Amy, so when it comes out that the pizza party that Glenn is promising to the winners also comes with an incentive prize of $100, things heat up on the sales floor of the mass merchandiser!

“Color Wars” pretty much continued to play to the show’s strengths overall, continuing to build the workplace dynamic between the various familiar Cloud 9 employees, with one notable exception. Despite stealing almost every episode that she’s in, this episode moved focus away from Dina somewhat, who was given an unrelated subplot about mourning her dead bird. There were still some funny moments here, but Dina’s one-note joke felt a bit overshadowed by the rest of the episode. She did get some more effective bonding moments with Glenn though, who can’t seem to figure out why a pizza party isn’t getting his adult workforce more excited, leading to him trying to plan even more juvenile party elements. 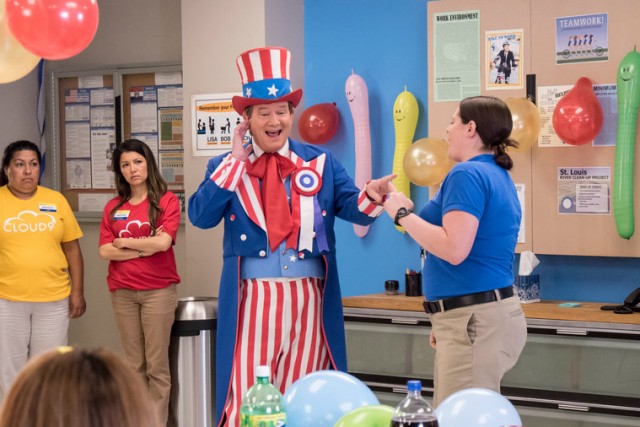 Most of the episode however spotlighted the floor employees, though still made great use of them for the most part. Garrett felt like the episode highlight this week, as he starts on the Red Team, and initially doesn’t care about the sales contest, only to reveal at the end of the episode that this is because he takes both t-shirts, so he always wins. I guess Glenn doesn’t write down who is on which team, and surprisingly, neither does Dina, though she could have very well been distracted by her dead bird today. Still, this led to a lot of standout jokes with Garrett, who actively tells Cloud 9 customers that he doesn’t care which team they give commendations to, and later schemes against Amy by making the announcement that the Gold Team employees are violent criminals that are put into the store by a workplace program. Garrett seems to be Superstore’s version of Jim Halpert from The Office at this point, only without the emphasis on pranks and the unrequited love for the female lead. This direction seems to be working well for his character however, since he’s a brilliant, yet lazy worker who is comically able to exploit the system for his own gain whenever he feels like it.

There were still plenty of comedic highlights with the other employees beyond Garrett though, which still made “Color Wars” a good episode overall. The reveal that the normally silent, elderly employee, Brett is actually a sales machine who is so good, that he sells the very shelves that the items are on, is pretty amusing, as is the further fleshing out of the B-list Cloud 9 crew, including a re-appearance by the well-meaning, but downtrodden Sandra as she interrupts a Gold Team meeting by trying to put a crinkled bill in the vending machine. Superstore’s lead ensemble is starting to come together now, so it’s good that the show is starting to develop B-list employees to keep expanding the jokes beyond the series regulars. Hopefully, we keep seeing more of this, especially since it’s unlikely that Superstore isn’t getting a second season at this point, given the good reception and viewership.

The big development this week however came from the reveal of Amy’s husband, Adam, who actually plays into a pretty clever conflict for Jonah. After Jonah demonstrates that he’s uncomfortable with up-selling, Amy twists Jonah’s arm to do it for her sake, since she’s having financial issues, especially with her daughter, Emma now needing braces. Jonah eventually convinces a man to buy an expensive grill and recording equipment, after seeing that he’s a sucker who makes crappy YouTube videos, and seems to have far too much disposable income anyway. Problem is though, that the man turns out to be Adam, Amy’s husband, so Jonah has inadvertently made her money problems a lot worse now. 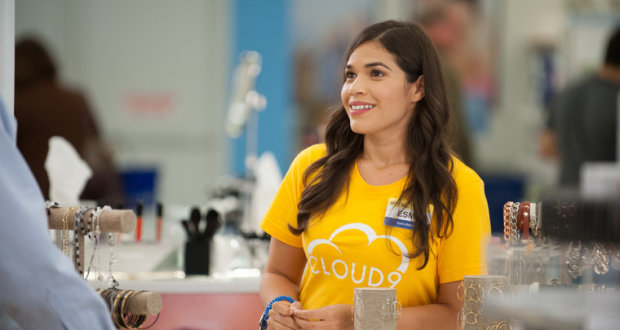 This was a funny, albeit slightly tragic twist for Amy, even if it’s karma, as she was encouraging Jonah to be dishonest. It feels a bit too easy to make Amy’s husband such an obvious idiot though, and a selfish one to boot. It continues to lay transparent groundwork that Jonah and Amy will eventually end up dating in the long term, since it’s easy to infer that the days are numbered until Amy gets fed up and divorces this moron. Even in the pilot, you could see that Amy takes off her wedding ring at work, as if she hates reminding her co-workers that she’s married to Adam, or is perhaps secretly hoping to meet someone else to give her that nudge away from her husband. It’s very likely that Amy simply married Adam because of their unplanned pregnancy with Emma twelve years ago, but it might have been more interesting if Adam was portrayed as a good, well-adjusted person that Amy simply wasn’t happy with.

Regardless, Jonah and Amy’s Gold Team still end up winning the Color Wars, and all seems to be well, or at least, as well as it could be. The solemn look on Amy’s face when she remembers that she has to go home to Adam is pretty depressing, but Jonah continuing to encourage her to open up about how she was married still left a bit of happiness to close out the episode. Thankfully, the gag of Garrett reading multiple cakes that a non-English-speaking employee accidentally transcribed from a scathing conversation between Glenn and Dina, as well as geriatric employee, Myrtle trying to hit a budget teddy bear pinata, were pretty amusing ways to end things. 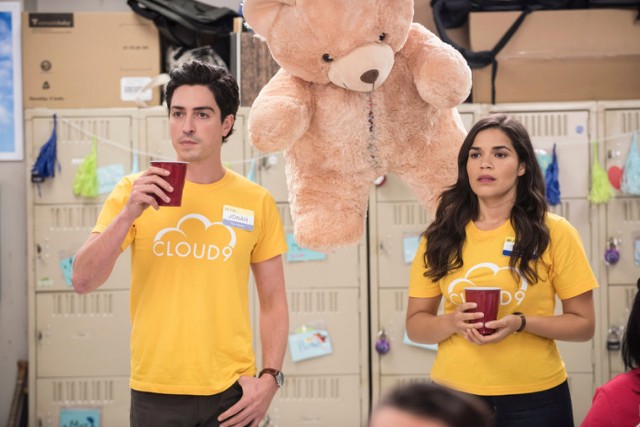 While not quite as good as the past couple of episodes of Superstore, “Color Wars” was still a pretty amusing offering overall, and still had enough clever writing and jokes to get by. The subplot with Dina felt like it was beneath her character, and as usual, the transparent setup for a future Amy/Jonah relationship felt too obvious, but what matters most is that Superstore is still funny, and it’s still a lot of fun to check in with the lovable antics of Cloud 9 on our Fridays.

Superstore 1.7: "Color Wars" Review
Superstore fell back on most of its established strengths in "Color Wars", which helped to develop some of the B-list employees, and introduced Amy's husband, amidst more reliably funny jokes.
THE GOOD STUFF
THE NOT-SO-GOOD STUFF
2016-01-30
78%Overall Score
Reader Rating: (0 Votes)
0%