After bringing a great personal Peralta conflict to the forefront with the return of Doug Judy last week, in one of this season’s best episodes yet, Brooklyn Nine-Nine continued to ride that effective high point with Peralta’s character in, “Karen Peralta” this week, another strong and very funny episode. The personal plight of Peralta yet again dominated proceedings, though two highly amusing subplots with the rest of the precinct kept the episode strong throughout as well.

Things kick off with Peralta wanting to take Santiago to meet his mother, played in a guest role by Katey Sagal, whom he is visiting for his birthday. Santiago is very nervous for the first meeting, and in true Santiago fashion, she’s studying up on even the tiniest details of Karen Peralta, even getting off a little too much on Peralta quizzing her at the precinct. I must say that Santiago’s character has benefited quite a lot from her relationship with Peralta in Season Three, more than I would have imagined when these two were rivals, and then reluctant friends during the previous two seasons.

This episode best exemplified how much funnier Santiago has become in the current season, perhaps better than any other episode of Brooklyn Nine-Nine to date, in fact! Things really got funny however when Roger Peralta makes a surprise re-appearance, complete with Bradley Whitford reprising the role from Season Two, resulting in Peralta taking offense to the revelation that his parents are dating again. Peralta even goes as far as to try to break the two up by divulging when Roger cheated on Karen with her best friend, and manages to threaten Roger into splitting, ironically creating a self-fulfilling prophecy.

The tactic came off as a bit heavy-handed, and Peralta being so defensive about his father was understandable to a point, though actively pushing his father to leave simply achieved the very result he was afraid of, which makes that motivation a bit inexplicable, especially after how much Peralta touted his father last season. Nonetheless, we did get plenty of scenes with Amy and Karen that were both awkward and funny, such as Amy trying to fill awkward silences by trying to fall back on her childhood talent of singing, “The Itsy-Bitsy Spider” really well, and Amy loudly asking Karen for a laxative so that Peralta could have a moment alone to threaten his father into leaving. It’s a ridiculous series of shenanigans, but in the end, Karen reveals that Roger already told her about the incident with her friend, and the two have actually been dating for three months at that point. It was kind of fulfilling to see Peralta make peace with his father to a point, and with his mother dating him again, though hopefully this storyline gets revisited later in the season, since it felt like this was a big personal development for Peralta, too big to adequately cover in just one half-hour episode.

As for the subplots, we got two silly and lovable sets of incidents for Boyle, Diaz and Jeffords, with the other unfolding between Captain Holt, Gina, Scully and Hitchcock. The Boyle/Diaz/Jeffords plot has Boyle and Diaz griping at having to equip new body cams on their uniforms during a stakeout, while the Holt/Gina/Scully/Hitchcock plot has the four of them lumped into a begrudging “Escape the Room” challenge together, after the rest of the Nine-Nine ends up unable to join them.

Jeffords really wants the body cams to work well, since he volunteered Boyle and Diaz to assist in a pilot program for them, though this has hilarious unintended consequences, as Diaz is forced to chase and corner their perp, right when Boyle is fully naked in a bathroom that they stumble into. The nude Boyle footage is fully captured on Diaz’s body cam, and after the criminal’s attorney contests the charge, the footage is forced to be recounted in full, with all of the legal team, along with Jeffords and Diaz, yet again having to bear witness to Boyle’s junk, in all its glory. It was a simple set of silliness, but it created a lot of laughs, with Jeffords’ reaction to Diaz revealing Boyle’s nudity on the footage being particularly hysterical. At least those body cams ended up being a success though, even if it came at the cost of a naked Boyle that nobody wanted to see.

As for the other subplot, the setup proved to be amusing enough, with Holt and Gina lamenting having to do the “Escape the Room” challenge with Scully and Hitchcock, who are naturally as dumb and unhelpful as expected. Surprisingly though, Scully ends up saving the day when he reveals that he knows Morse Code, just as Hitchcock ends up accidentally deducing a geographical puzzle with a nearby television. In the end, one of each of the team find one of the four keys needed for escape, and they all succeed in the challenge together, with Holt praising how well the unit works as a team. When Hitchcock asks to do it again next week however, Holt says, “No, that would be horrible”, in a great final gag. Again, this subplot was pure gag fodder, just like the Boyle/Diaz/Jeffords subplot, but it was very funny, so that’s just fine. 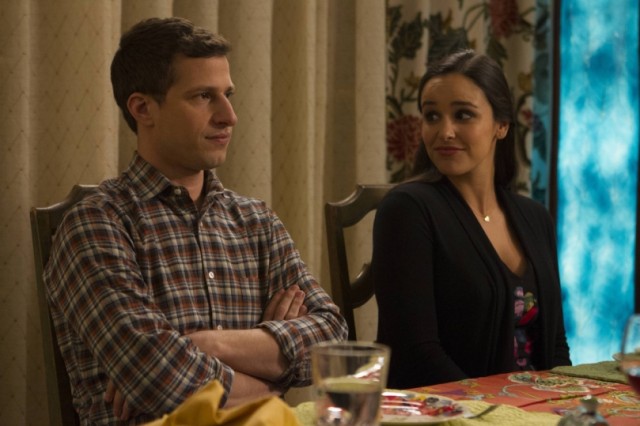 Like I said, it was Peralta’s family challenges that really stole the episode, though the jokes still felt great across every plot overall. The re-introduction of Roger Peralta seemed to fare better than it did last season for the most part, and while Peralta came off pretty immature at the knowledge that his parents were dating again, even for his standards, it was good to see the Peralta family mended, and accepting of Santiago in turn. Hopefully, we get a chance to delve deeper into the family dynamic though, because, in true Brooklyn Nine-Nine fashion, it really can’t be that easy!

Brooklyn Nine-Nine 3.14: "Karen Peralta" Review
Brooklyn Nine-Nine delivered yet another strong and funny episode this week, as Santiago meets Peralta's mother for the first time, and the rest of the precinct gets up to some rather uncomfortable team-building shenanigans.
THE GOOD STUFF
THE NOT-SO-GOOD STUFF
2016-02-03
88%Overall Score
Reader Rating: (0 Votes)
0%