It’s finally happening. After much speculation about the crossover chances for CBS’ Supergirl series and The CW’s DC Television Universe shows, the two networks and DC Entertainment have reached a deal, and at least some of The CW’s DC Television Universe will make its way on to Supergirl, and vice-versa! On March 28th, Supergirl will air a crossover episode that will incorporate Grant Gustin’s portrayal of The Flash, from The CW’s enormously successful The Flash television series. 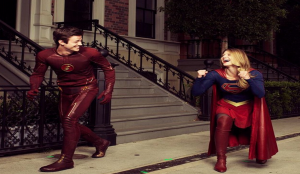 So far, it’s only The Flash that will be making his way to National City, and the details of how this will happen are currently unknown. Supergirl could be portrayed as taking place in a parallel universe to The CW’s DC Television Universe, which Barry Allen could stumble into during his traipses through alternate universes during the events of The Flash, or National City could simply be incorporated into the canon of the DC Television Universe, as some far-off burg that isn’t closely connected like The Flash’s Central City and Arrow’s Star City. It all depends on what CBS and The CW hammered out as a deal.

While CBS and The CW function as separate networks, CBS co-owns The CW with Warner Bros., which is why this crossover was able to happen. The Flash and Arrow have crossed over on several occasions with special event episodes for The CW lineup meanwhile, and both of those shows ended up recently giving birth to a third CW series, Legends of Tomorrow, which explores alternate time periods within the network’s DC Television Universe. Previously, CBS seemed to want to keep Supergirl self-contained, though Supergirl does share a creative team with DC’s trio of shows on The CW, namely in producers, Greg Berlanti, Andrew Kreisberg and Sarah Schechter, which further lent to the possibility of Supergirl being able to cross over with The CW’s DC Television Universe in some fashion. Ironically, both The Flash’s and Supergirl’s respective stars, Grant Gustin and Melissa Benoist, are also veterans of FOX’s now-wrapped musical dramedy series, Glee as well.

Keep speeding to Eggplante for all news and updates on Supergirl, The Flash, and other television projects from DC.