After the spectacular high point of Furious 7 last year, which was one of 2015’s top-grossing movies, raking in over a billion-and-a-half dollars worldwide, it’s unsurprising that Universal will want to keep their car-themed action movie franchise going even longer. Despite once again debating whether to end the franchise with its upcoming eighth movie, despite also musing about the idea of prequels and spin-offs, it seems that Universal has gone ahead with plans for a ninth and tenth movie in the series. Those movies have also reserved release dates, which series star, Vin Diesel has just outed on his Instagram page. 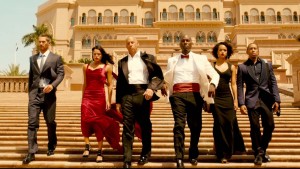 The currently-untitled ninth Fast and Furious movie is now scheduled to hit theatres on April 19th, 2019. The currently-untitled tenth Fast and Furious movie meanwhile is set to debut on April 2nd, 2021, and is currently being billed as the series’ final installment. Universal has put together the new tagline, “2 Decades, 10 Films, 1 Saga” to emphasize that point. Both movies currently have their dates to themselves, with no other movies scheduled (which is unsurprising, given that they’re so far away), and the tenth Fast and Furious movie is so far the only movie scheduled for a release in 2021 already, beating the previous record of Marvel reserving dates for three mystery movies in 2020, and DC currently reserving 2020 dates for their furthest-planned DC Extended Universe movies so far, Cyborg and Green Lantern Corps.

The Fast and Furious series’ next proper installment, titled ‘Fast 8′, is currently scheduled for release on April 14th, 2017, though any story details for the movie are currently unknown, beyond that it takes place after the events of Furious 7. Vin Diesel, Michelle Rodriguez, Jordana Brewster, Elsa Pataky, Chris ‘Ludacris’ Bridges, Tyrese Gibson, and Lucas Black are all returning for the eighth movie, with Dwayne Johnson, Jason Statham and Kurt Russell also believed to be returning as well.

Keep racing to Eggplante for all major news and updates on the Fast and Furious movies.