After a reasonably good, though not outstanding debut episode last week, Lucifer is continuing along on much the same note with, “Lucifer, Stay. Good Devil” this week. Once again, its lead character is absolutely magnetic, with Tom Ellis continuing to steal this series with his devilishly entertaining Lucifer portrayal, while the rest of the series is either acceptable, or needs work, with the police procedural format still being the weakest link in the concoction.

This week’s episode continued to explore the idea of Lucifer changing after so much repeated exposure to humanity, which he helpfully discusses with the therapist that he’s sleeping with, of course. We even get some increased exposure from arch-demon, Maze, who nags Lucifer all the more about his increased humanity this week, trying to provoke his true evil side with the pressing to do something of more substantial worth, by demonkind standards anyway. Amenadiel also lands again with a deal; If Lucifer returns to Hell, Amenadiel will prevent the wrath of God from coming down on him. 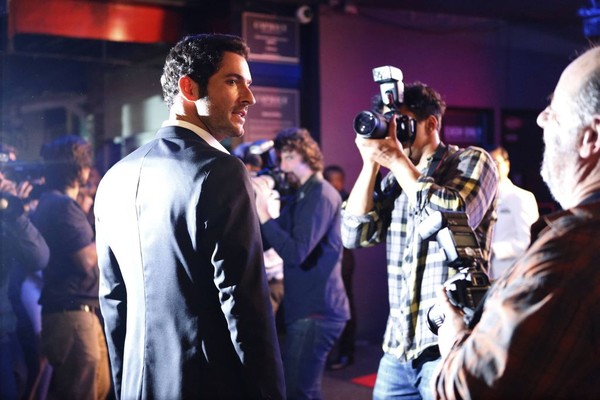 Predictably, Lucifer continues to reject Amenadiel’s pleas to return to Hell, and Amenadiel saying that Lucifer doing good is upsetting the balance of the world, is still a good way to keep the character in check. Of particular concern is Lucifer just hanging around with Chloe Decker, which Amenadiel is very concerned about, as Lucifer saved her life, selflessly, and with no element of personal gain involved. The dynamic between Heaven and Hell in this universe continues to be a fascinating one, even though it begs the question of how this balance was in place before Lucifer was cast down from Heaven, and why God wouldn’t want Lucifer to redeem himself in any way. Maybe those are questions that the show will answer down the line.

Fortunately, any development of Lucifer still continues to go over well. We get more peeks into his personal life and his psychology, namely in how Lucifer starts trying to incorporate ironic punishments into his earthly activities, particularly for the episode’s climax. The show is clearly trying to entertain a dynamic of Lucifer developing a human side, and how that will play into the battle against purpose vs. self, something that is bound to serve as a foundation for the remainder of Season One. Nonetheless, when Lucifer is so charming and so fun, it doesn’t seem to matter what the next step of his journey in the mortal realm is, since the character is such a winner, and can definitely keep viewers tuning in week after week by himself, it seems.

Sadly, where the show continues to come up short is in the police procedural element, with Lucifer churning out another mostly unremarkable case-of-the-week, albeit one that continues to flesh out Chloe Decker’s character. Chloe is still far less interesting than Lucifer, but at least she’s given a few additional dimensions after being a largely straightforward straight woman during the pilot, especially when her daughter, Trixie still proves to be so adorable and funny herself. The confession by Chloe of her sordid past as a one-off actress who appeared in, “Hot Tub High School” to her young daughter was a highlight moment in the episode, not only because it’s sweet, but also because it was quite funny, as Trixie revealed that she’d already seen the movie, and found it hilarious, telling her mother that she has internet, and that Chloe’s DVD isn’t even in high-definition. Fortunately, this is another element that keeps Lucifer afloat amongst the sea of comic book-inspired primetime shows; The humour continues to be funny, and nicely on point.

Sadly, as much as this week’s case continues to try and weave itself into Chloe’s personal life, after the prime suspect in the murder of an actor’s son is revealed to be a paparazzi that Chloe punched out after he invaded her father’s funeral, the case itself still isn’t that interesting. The show is extremely obvious with who the real culprit is this time, with the creepy protege of the prime suspect obviously being the real murderer, making most of the detective sequences with Chloe just come off as tedious filler. The end of the episode, with Lucifer forcing the two into a stand-off that goes rotten, is unexpected though, particularly when Lucifer exploits Amenadiel’s time-slowing hallmark to summon him, then pluck a bullet out of thin air, saving the life of the innocent prime suspect, with the added bonus of mocking Amenadiel with another rejection. Oh, and then he kicks the real killer in the balls while time is slowed. Man, I love this character! Why is he saddled with such tedious procedural elements at present?!

This just leaves Lucifer and Chloe starting to look into each other, and dig more into their respective psychologies, with Chloe running a pretty intricate background check on Lucifer, and Lucifer exploiting his abilities to find dirt on Chloe, only to be disappointed that none exists. It seems doubtful that Chloe will catch on about Lucifer being the actual Devil any time soon, and likewise, Lucifer failing to find any dark secret in Chloe’s backstory is predictable as well. Still, the fact that both characters don’t totally trust each other’s stories yet could play into some interesting developments later this season, if it’s capitalized on well.

Lucifer is still in a semi-rough early stage, and making the show a police procedural so far doesn’t seem to be going well, but fortunately, the show still isn’t wanting for entertainment value, to compensate. The titular character is still a hoot, the humour is still hilarious and effective, and even if the show doesn’t totally feel clever at this point, it at least compensates by feeling fun. Vertigo has brought a better loose adaptation of one of its graphic novels to the airwaves already, with The CW’s superb iZombie series, but at least Lucifer makes for amusing popcorn entertainment, which is better than many shows achieve during their debut episodes.

Lucifer 1.2: "Lucifer, Stay. Good Devil" Review
Lucifer continues to deliver a high fun factor and an enormously appealing lead character in its second episode, even if the police procedural format still feels like a poor fit, and this week's case is even more predictable than last week's.
THE GOOD STUFF
THE NOT-SO-GOOD STUFF
2016-02-03
75%Overall Score
Reader Rating: (0 Votes)
0%