A familiar face from Arrow’s past makes his return this week, among a few others, though strangely, that almost felt like the smallest of the show’s many victories in its latest episode, “Unchained.” This episode was absolutely stellar, being very busy and full of many plot developments, with almost none of the lead personalities left out of very exciting new storylines, on account of this episode single-handedly setting Season Four of the series on a very exciting new course!

So, to start with the obvious draw of the episode, Roy Harper has returned to Star City! It’s not a social call though, as it turns out that Roy is robbing various tech companies throughout the city, stealing components that are necessary to build what Felicity refers to as a, “Web Nuke”, a gizmo that is capable of obliterating the entire internet. Naturally, questions are raised, and when Oliver and the rest of his team finally manage to trap Roy when he attempts to rob Curtis’ impressive new battery invention from Palmer Technologies (presenting a very cool moment where Curtis uses one of his T-spheres as a weapon for the first time, save for the fact that it doesn’t work), they obviously find out that Roy isn’t acting of his own accord.

Turns out that Roy had successfully set up a new life for himself in Hub City (a very cool nod to DC Comics sleuth, The Question), but eventually started being blackmailed by a mysterious person with seemingly limitless influence over technology and hacking, known as, “The Calculator.” DC Comics fans may recognize The Calculator as a somewhat goofy, but quite dangerous villain from the printed panels that has a special technology suit that can predict the actions of any DC personality before they happen, though obviously, he’s been re-tooled significantly for Arrow, now mainly being a super-hacker with a vast array of technology-based resources.

This presents another great tech-based villain for Felicity to battle against, with Felicity actually carrying a lot of the workload this week, despite now being bound to a wheelchair. While trying to pursue and stop The Calculator, Felicity must also prepare to present Curtis’ new battery invention to salvage Palmer Technologies’ stock, though naturally, it doesn’t go well in rehearsal, since Felicity’s self-doubting, wheelchair-bound image is not making the company look good. Oh dear.

That seems to be the least of the group’s problems however, as not only is The Calculator still loose, complete with a platoon of hired mercenaries, but Thea suddenly collapses while initially pursuing Roy, with her condition gradually degrading. Malcolm Merlyn returns to Star City upon hearing the news (he’s Ra’s Al Ghul now, so some little birdie must have told him), and warns Oliver that Thea is going to die, because she’s cheating the death-dealing demands of the Lazarus Pit. Oliver tries to protest, even going as far as to set up a meeting with Damien Darhk, whereupon he will beg for Thea’s life. He does so by contacting Darhk’s wife, who is now running against Oliver in the mayoral race for Star City, though after the episode brings this up, it seems to largely save it for future episodes. That’s fine though, since so much else is already going on in, “Unchained.”

Thea however protests, saying that the decision with what to do with her condition should be hers, which even Merlyn emphasizes to Oliver. When The Calculator strikes for the climax, Oliver makes the difficult decision to abandon his meeting with Darhk, in order to help Diggle, Laurel and Roy stop The Calculator’s tech-crippling device, which will actually take down all of Star City’s infrastructure, from bursting water and gas mains, to overloading electrical grids, no doubt resulting in the death of thousands. It’s very awesome to see Roy interacting with and fighting with the group again, especially when the action throughout the episode is surprisingly good, despite the show’s latest villain not being a direct fighter. Roy even makes a pretty badass final move, when it seems like someone has to stay behind and sacrifice themselves by blowing up The Calculator’s machine, just barely ziplining out after detonating an explosive arrow. Damn! Looks like Roy’s still got it, despite being out of the vigilante game for quite a while.

While all this is going on, we actually get a rare glimpse back to Nanda Parbat as well, where Nyssa has stayed imprisoned by the League of Assassins. With the help of an accomplice however, she escapes, resulting in a few more cool action scenes, before making contact with Tatsu Yamashiro/Katana in Japan, whereupon she inquires about a mysterious item called, “The Lotus.” I’m not sure why Katana is still featured on the series, when the show seemed to kill off Amanda Waller last week, due to her role in this August’s Suicide Squad movie (which another version of Katana is also a part of), but whatever. It’s still cool to see Rila Fukushima return to the series again.

As great as the bulk of the episode is, it’s the conclusion that contains all of the biggest bombs, and boy, are these some whoppers that are sure to whip audiences into a frenzy! To start, Felicity makes the presentation of Curtis’ battery successfully, saving the company, though unbeknownst to Oliver, The Calculator is sitting right beside him during the presentation! Oh, and it gets worse too, since The Calculator is actually Felicity’s father! Well, that explains where she got her hacking and tech aptitude from, and I have to say that making Felicity the daughter of a recognizable DC Comics villain was a very cool and unexpected twist, one that the show hopefully keeps capitalizing on over the rest of the season, especially since Felicity is obviously unaware that her father is The Calculator! 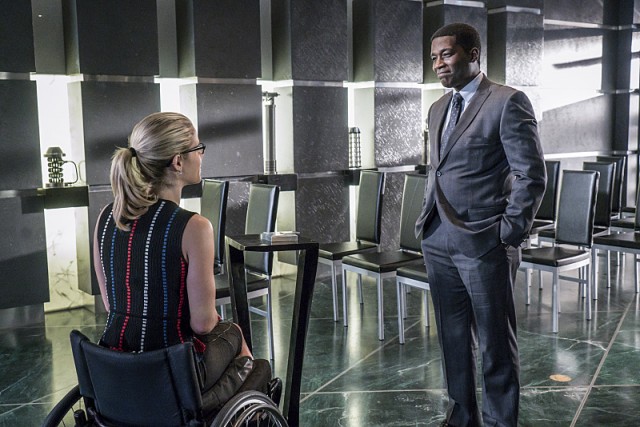 Another bomb is also dropped with Thea, who actually has a touching final moment of closure with Roy, something that she was largely denied when Roy first bailed during Season Three, and Oliver and Merlyn even shake hands and temporarily make peace, coming to an understanding about their care for Thea. All of the emotional happiness is in vain however, as Thea then slips into a coma, and ends up on life support at the hospital! With Felicity now confirmed as not being the season’s mysterious big death in a few months, the show now seems to be flirting with the idea that it could be Thea in that mystery grave. The drawn-out struggle to keep Thea alive could end up in a loss for Team Arrow, though again, this feels questionable, especially since Nyssa shows up in the hospital room moments after Thea is placed there, and reveals that, “The Lotus” is actually a magic elixir that can undo the effects of the Lazarus Pit, curing Thea! I’m not sure why Oliver can’t just call John Constantine again, since he cured Sara of the Lazarus Pit’s ills (Merlyn even brings this up in this very episode, which feels like a weird plot hole), but hey, at least it gives Team Arrow something else to do beyond pursue Darhk for the remainder of Season Four.

We still had flashbacks this week, and they were quite interesting, despite still not moving the flashback storyline forward. Oliver is tortured by Reiter for information on the maps that he and Diana salvaged from The Amazo, and eventually, seems to pass out from his injuries. Here however, he gets visited by a spiritual apparition of Shado (boy, Arrow is all about appearances by legacy characters this week, eh?), who helps guide him on a journey of self-forgiveness. Yes, Oliver’s guilt is yet again eating at him in both the past and the present, and the journey ends with Oliver waking up in a cell with Diana, and confessing that he was actually the one that killed Diana’s brother. The flashback sequences then end with Diana in tears at this revelation, and this will no doubt leave Oliver in an even more vulnerable position in the past, now that Diana will possibly not be in his corner anymore. 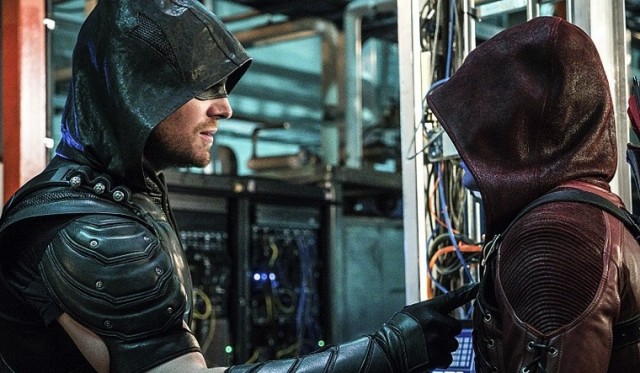 After “A.W.O.L.” turned out so well last week already, “Unchained” really blew expectations out of the water this week. What could have been a half-hearted throwback episode actually ended up being an excellent highlight episode for Season Four of Arrow at this point, bringing back several old faces in a way that highly benefits the story, and puts Season Four on a very exciting new course, which it really needs. The surprise reveal of The Calculator being Felicity’s father, and Thea barely clinging to life from the Lazarus Pit’s effects, capped off the episode beautifully, and the re-surfacing of Nyssa should hopefully prove to be another cool new twist for Season Four, especially when she reveals that she’ll only trade The Lotus to Oliver, if he kills Malcolm Merlyn. Once again, Star City finds itself on the edge of a knife, and once again, Damien Darhk is not the city’s, nor its hero’s, sole worry.