Legends of Tomorrow presented its latest episode, “White Knights” several days early here in Canada, as an exclusive lead-out program to CTV’s broadcast of Super Bowl 50 this past Sunday, but now, the episode has aired in other parts of the world, in its usual timeslot, which means that I have the go-ahead to upload my review of the episode. Fortunately, it’s another strong episode for the series, and one that specifically spotlights the enjoyable lead ensemble, and their developing dynamics with each other.

In fact, Vandal Savage didn’t even make an appearance this week! After Rip and co. chase Savage to 1986, the immortal warlord is merely mentioned every now and again, though never actually seen. This gives us a chance to keep exploring the team interactions, and witness new ones spring from the new backdrop of 1986, the climax of the Cold War that saw the world on the brink of nuclear annihilation. We also get a look from both sides of the Iron Curtain as well, with the first half of the episode unfolding at The Pentagon, and the second half unfolding from within Moscow, Russia. 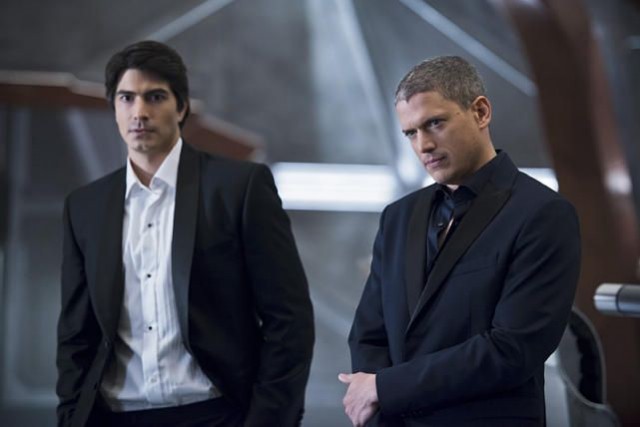 The beginning of the episode is highly entertaining, as every character takes part in a heist-like mission to retrieve a file about investigations on Savage and his activities. This involves Sara and Kendra posing as military officers, Ray and Leonard posing as janitors, and Mick causing a diversion, which turns out to be a heated arm-wrestling match. All the while, Firestorm has to divert the power so that Kendra and Sara can move around undetected, though this results in a complication that sets off an alarm. From here, things quickly grow out of control as The Pentagon ends up on high alert, culminating with Kendra going full-blown Hawkgirl, and clawing up a few guards a bit too much!

The incident with Kendra leads to Rip suggesting that Sara serve as a trainer and mentor to the struggling Hawkgirl, since both of them struggle with an uncontrollable violence within them. This story idea is sound on paper, though honestly, this was the sole weak point in an otherwise great episode. The idea of having Sara train Kendra is sound, but Sara being the teacher, only to give in to her own bloodlust, in turn making Kendra take the initiative, feels odd. Wasn’t Kendra rejecting the idea of being both a student and a teacher mere moments ago? Making matters worse is that this training subplot serves as a lame excuse to bench Kendra and Sara for the following mission, which, frankly, doesn’t make sense, and simply serves as a contrived way to set up the next episode, after things inevitably go wrong again.

At least every other character is given lots of entertaining material though. The Ray/Leonard team-up constantly played off with equal parts intrigue and laughs, and beautifully played off of Ray being a, “Boy scout”, while Leonard played the, “Bad boy” foil to Ray, and ironically ended up being far more successful. This is best demonstrated when Ray has to try and serve as a honey pot to seduce a Russian scientist named Valentina Vostok (a name that longtime DC Comics fans may recognize as a Russian operative from the printed panels, albeit one that hasn’t yet been introduced into the New 52 canon), only to fail more than once, and have Leonard succeed instead. Leonard lifts her ID and wallet, which allows Rip’s team to make their way into the next base of Savage’s operations, where the Pentagon intel claims he’s building a revolutionary new weapon.

Speaking of Rip, there was an interesting aside that had Rip meet up with his former mentor, Time Master Druce, who offers him another opportunity to return to the future. Mick warns that it’s a trap however, and sure enough, he turns out to be right, as Rip has to be bailed out of an attack by Druce and Chronos by his team. It was a weird little aside that was thrown in to the episode seemingly at random, especially since it re-treaded the idea of the team being unsure of their mission, and having to renew their conviction, again, but seeing Rip betrayed by his former mentor, and Mick calling it, nonetheless proved enjoyable.

In fact, Mick and Leonard dominated most of the episode, as their criminal expertise proved to be the most helpful to the story’s entertainment value, particularly in examining whether Rip’s crew are true good guys, or whether they’re even obligated to perform short-term heroic actions. Consequently, the Firestorm dynamic also improved immensely between Martin and Jefferson this week, as Martin struggles with the guilt of possibly dooming Jefferson to a death that he would survive, and Jefferson starts wishing that Martin would stop disregarding his every thought. The way that Martin brought up how he felt guilty over Ronnie Raymond’s death from the events of The Flash was inspired, and Martin undertaking the next mission on his own, saying that Jefferson has risked his life enough as the physical vessel of Firestorm, was also a neat direction for the story, and one that continues to prove that the two halves of Firestorm aren’t useless when they’re not merged.

Unfortunately though, Valentina turns out to be a bad woman, and the team ends up in a bad spot when she shows up to the site of Martin trying to steal a nuclear core, proving that Savage is trying to build his own Soviet version of Firestorm, and Ray twists Leonard’s arm to get her out. In the ensuing chaos, Leonard is successfully guided out with the core by Rip, though Ray, Mick and Martin all end up captured by the Soviets. The episode winds down with Martin thrown in an impenetrable Soviet gulag, and warned that, if he doesn’t co-operate, Ray and Mick will be tortured and killed as a consequence. Oh dear.

Legends of Tomorrow’s lead characters are as enjoyable as ever to watch in the show’s latest episode, and aren’t at all bothered by being B-list characters in the case of DC Comics canon. Almost all of the characters were given entertaining storylines this week, with only the Kendra/Sara subplot disappointing a bit. Nonetheless, things certainly look to be leading into an exciting episode next week, as the remainder of the team must rescue their companions from the Soviets, whatever the cost!

Legends of Tomorrow 1.4: "White Knights" Review
Legends of Tomorrow's lead ensemble continues to make for a highly enjoyable new DC series, with almost every lead getting very entertaining storylines this week, save for the flatter subplot of Kendra and Sara.
THE GOOD STUFF
THE NOT-SO-GOOD STUFF
2016-02-12
84%Overall Score
Reader Rating: (0 Votes)
0%