It’s a big Valentine’s Day-themed episode for The Big Bang Theory this week!… At least, it hoped to be. Sadly, the show still seems to be stuck in a rough patch with, “The Valentino Submergence”, a lacklustre episode that failed to make the most of the occasion, despite a big shake-up with Raj, and a huge reveal for Bernadette and Howard.

Things begin with Raj finally deciding that he needs to break up with Emily. Again. It looked like the two were breaking up at the end of Season Eight, but for whatever reason, this didn’t stick, and the two remained a couple in Season Nine, despite The Big Bang Theory continuing to treat Raj’s girlfriend like an afterthought that it only brings up when it feels like it. One of the biggest disappointments of this episode is that, even when Raj does finally break up with Emily, she’s still treated like an afterthought, and is ushered off of the series with both speed and apathy. Seriously? Even when Raj tries to phone up Claire from last week, who reveals, shock of shocks, that she has a boyfriend, this is a split-second moment that the episode brings up, and quickly forgets about, as if it wants to get straight to the fallout of Raj winding up alone on Valentine’s Day. 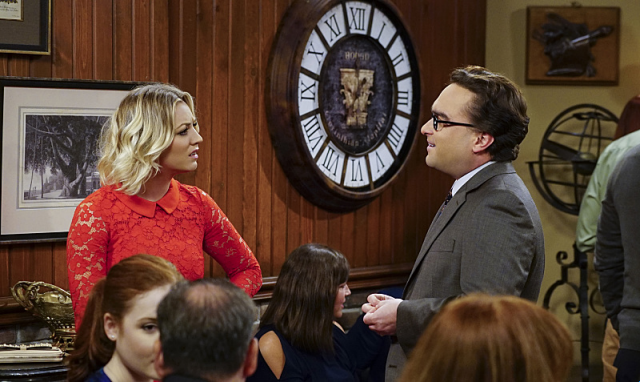 This proves to be a misguided decision, since Raj yet again moping and bitching about being alone serves as a big chunk of the episode, and it’s boring, tedious, and way overdone at this point. Rather than lead up to an emotional and memorable break-up that, frankly, many of the audience no doubt knew was coming, the show just gives Emily and Claire both the boot, completely quashing Raj’s love triangle in an instant, and leaving him taking big strides backwards as a character. What should have been a big event for the series, ended up being a thankless exit for Emily’s already under-utilized character, and that’s a real bummer.

Fortunately, the one bright spot of the episode at least came into play to prevent the Raj drama from becoming too irritating. This came with the always-enjoyable return of Sheldon’s online webseries, “Fun with Flags”, and Sheldon doing his first live episode with Amy, who has her name added between two mentions of Sheldon’s name on the show as a Valentine’s Day gift, was where most of this episode’s best jokes were. Both Raj and Kripke phone in to the episode to whine about how lonely they are on Valentine’s Day, and Sheldon getting progressively more annoyed that no one wants to talk about flags at least made this tired relationship drama easier to swallow. Amy’s reactions to Kripke’s rudeness was pretty funny too, especially when she starts transparently trying to boot him from the conference call, only to have him call back several moments later, when she thinks she’s found a girl watching the show for Raj to meet. I suppose it’s the thought that counts.

Leonard and Penny meanwhile try to get a dinner reservation, only to be told that they have to wait for an hour. When Leonard tries to unsuccessfully grease the host, and Penny unsuccessfully tries to flirt with the guy to get a table, only to find out that he is ten years younger than her, she starts becoming bothered by her age. This leads to her and Leonard driving around, trying to find some place to prove that they’re young and fun for Valentine’s Day… Until they settle for crashing Sheldon’s and Amy’s, “Fun with Flags” broadcast in goofy Valentine’s Day garb, throwing confetti around. Umm… Why? You could practically see the writers throwing up their hands here, since they clearly didn’t have an answer for Leonard’s and Penny’s aging woes, despite the fact that they’re in their thirties, and it really shouldn’t be that hard for them to find something fun to do on Valentine’s Day, especially not in Pasadena! Frankly, it just felt like the show was reaching with this plot, and it ultimately ended up being pretty pointless.

Surprisingly though, Leonard’s and Penny’s night wasn’t the most pointless subplot of the episode. That dubious honour went to Howard and Bernadette, who have just gotten a new hot tub, and discover a rat in it. Oh, but it’s not a rat, it’s a rabbit, which they find out when they take it out. How the hell did a rabbit get into their hot tub?! Conveniently, the show doesn’t explain. The rabbit then bites Howard, who then worries that he has rabies, which predictably goes nowhere, just as Howard and Bernadette acting like they’re going to adopt the rabbit doesn’t seem to amount to anything. After Howard then goes inside, Bernadette decides to tell Howard later that she’s pregnant. Ummm… Ok? Where did that come from?! Yet again, The Big Bang Theory is clearly trying to catch audiences off-guard by just tossing in a big, unexpected twist at random, but rather than feel like a satisfying shock, this big development with the Wolowitz family just felt like it was awkwardly tossed in at the network’s behest, without regard as to whether the episode, or the series as a whole, even bothered to lay the foundation for it recently. Predictably, we won’t get a payoff for this until later either.

Ultimately, “The Valentino Submergence” was a pretty frustrating misfire for The Big Bang Theory, especially for its latest Valentine’s Day-themed episode. The “Fun with Flags” material was at least amusing, and the episode had some decent jokes with Leonard and Penny here and there, but the Wolowitz subplot was infuriatingly pointless, and the awkward reveal of Bernadette’s pregnancy, along with the thankless nature of Raj’s break-up, didn’t land with the proper impact, since the episode didn’t take enough time to flesh out either of these twists. Just as some Valentine’s Day occasions are better than others in real life, there’s some Valentine’s Day episodes of The Big Bang Theory that just don’t really work. Sadly, this was one of those episodes.

The Big Bang Theory 9.15: "The Valentino Submergence" Review
The Big Bang Theory once again misfired with a very disappointing Valentine's Day-themed episode, one that was at least salvaged by a funny return for "Fun with Flags", but mostly dragged down by tired, awkwardly-executed romantic drama.
THE GOOD STUFF
THE NOT-SO-GOOD STUFF
2016-02-12
58%Overall Score
Reader Rating: (0 Votes)
0%