Better Call Saul returns for its second season, and after learning the backstory of the man who would one day become Saul Goodman last season, this season seems to be all about laying the foundation for the transformation in the show’s present, rather than the past. Thus, the appropriately named, “Switch” picks up when Jimmy first turns down the deal of a lifetime to work at the Davis & Main law firm. Kim is naturally perplexed by this decision, but Jimmy still finds himself haunted by a question that he continues to ask Mike upon seeing him at the toll booth; Why didn’t the two keep that million dollars from Season One, when they knew they could get away with it?

This episode had Jimmy gently pulling on that thread, as he decides to have a small respite at a hotel, practicing his smooth-talking charm on idiots, and going back to his con man ways. Jimmy even convinces Kim to go along with his latest mark, a loudmouthed financial manager in the hotel bar, whom Jimmy and Kim stick with a very expensive tequila bill for kicks, after pretending to be interested in investments. This even leads to the two hooking up, even if it initially seems like they’re going to part ways afterward.

Kim immediately makes a point to mention that the lifestyle of a con man is not sustainable, and that Jimmy can’t live his life in this manner. Clearly, Jimmy wants to give it an honest go though, as he stays adrift in the hotel pool, trying to call Kim on his phone, and coax her into conning more suckers. Kim naturally doesn’t respond though, and that’s when Jimmy starts wondering if maybe she’s right.

I’m getting the sense that Season Two of Better Call Saul is setting up the idea of the ‘perfect storm’ that pushes Jimmy McGill into becoming Saul Goodman. There’s hints of a mid-life crisis, a desire to break out from his brother’s shadow, an attraction to Kim, and a struggle with the fundamental reality that Jimmy is, at heart, a con man, which all begin to fuel the pieces of Jimmy’s character making his big change. Naturally, Bob Odenkirk continues to deliver an excellent performance as well, with Jimmy still feeling so eerily real and sympathetic, even in his losing battle to avoid becoming amoral. 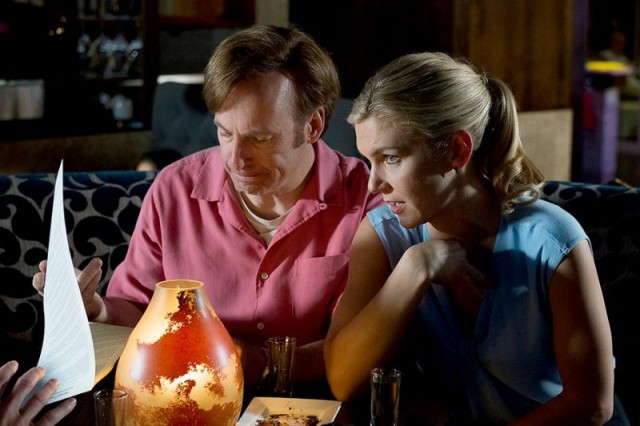 The episode doesn’t end the way that you think it will however, as Jimmy ultimately reconsiders the job offer at Davis & Main, and finds himself in a wonderful new work environment, complete with a company car, and an office assistant that will tailor the job to his every whim. It seems too good to be true, though a nice nod is made to Jimmy’s desire to break the rules, when he flips a light switch that a sign urges him not to touch, and nothing visibly happens. Try as he may, Jimmy will never ultimately resist the pull of Saul Goodman, who is around the corner in his future.

Fortunately, Better Call Saul still seems to be avoiding falling into that prequel trap of being dragged down by us knowing how Jimmy’s story ultimately ends, especially if the viewer has already watched Breaking Bad in its entirety. We once again get a flash-forward to Jimmy/Saul building a new identity as ‘Gene’ after the events of Breaking Bad, as he lives a mundane, low-key existence as a Cinnabon employee in a Nebraska mall. The next step of the sequence has Gene accidentally locking himself in the garbage room when the door shuts, and finding himself unable to use the emergency exit, as he doesn’t want to deal with the police being called. Thus, Gene sits for an unknown amount of time, until the janitor finally lets him out, not noticing that Gene scrawled into the wall, “S.G. was here” with a screw in the meantime. It was another fantastic flash-forward scene, and one that tragically proves that, even after he’s been apparently ruined, Saul Goodman will always be the dominant side of the former Jimmy McGill.

All of this strong material was yet again contrasted well with another character arc, this time from Pryce, or, “Daniel” as he’s now revealed to be known, the bumbling amateur drug merchant that Mike watches over. After Daniel buys a lavish hummer, which Mike objects to, he makes the ‘questionable’ (read: stupid) decision to fire Mike, and then sell the drugs to Nacho directly. Since he’s in way over his head, Nacho sneaks his address information from the hummer, robs his house, and this in turn has the police get suspicious of what Daniel is really up to, when he inevitably calls them to address the robbery. This was an effective contrast to the sly, street-smart disposition of Jimmy and Mike, reminding us of just how much savvy is required to operate in their world of greys, on top of setting up Daniel to be an interesting supporting personality for the show’s second season.

Better Call Saul continues to be one of the best shows on television in its second season, just like Breaking Bad was. Its Season Two premiere doesn’t disappoint, as it begins to start exploring the events in the present that ultimately begin to nudge Jimmy to the dark side, continuing the fantastic blend of comedy and tragedy, as well as continuing to beautifully illustrate the tragic and appealing soul of Jimmy McGill. We yet again leave Jimmy on a high point for the start of this season, but even if we know that it won’t last forever, it still looks like we won’t have any trouble enjoying the journey, for even the road to ruin still has its toll booth.

Better Call Saul 2.1: "Switch" Review
Better Call Saul continues to shine as one of the best shows on television with the start of its second season, as the current events of Jimmy McGill start laying the foundation for his dark turn, even as we see him ultimately accepting a big shot at success.
THE GOOD STUFF
2016-02-16
90%Overall Score
Reader Rating: (0 Votes)
0%