NOTE: Full spoilers for this episode of “The Walking Dead”, including multiple major character deaths, are present in this review

The long-awaited midseason premiere for Season Six of The Walking Dead is a bit of a tricky beast to critique. On the one hand, at least it’s far more interesting than the boring rut that the show had been stuck in since the latter episodes of 2015, which more or less had everyone bumbling around Alexandria, and not doing much of substance. Even when the walls of the town were breached, and Walkers poured in for the midseason finale last November, the show felt like it was saving the big fallout of this, beyond people running scared for a bit, and Deanna finally buying the farm, for the midseason premiere.

So, at least you’ll be more engaged than the show’s past few episodes in, “No Way Out.” Unfortunately though, that doesn’t excuse the same unforgivable narrative laziness that is still a huge problem in Season Six at this point. The show clearly didn’t have an exit strategy for the Walker invasion, particularly since it doesn’t want to get rid of Alexandria at this point. Oh yeah, Alexandria is still standing at the end, with the walls down, and with an army of Walkers having poured in beforehand. I’ll get to this enormous insult later, but for now, suffice to say that the series is really stretching the realms of logic now, even for the standards of this show. 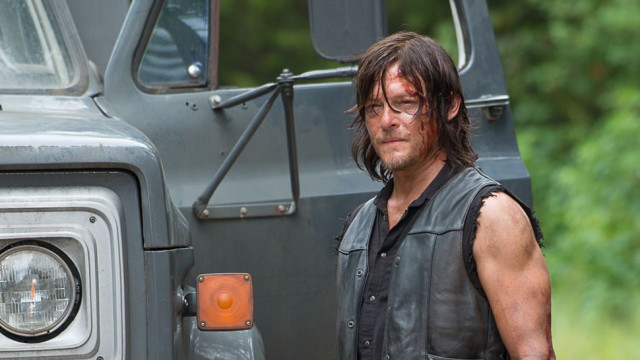 At the very least, the show’s opening sequence, which plays out immediately after the post-credits tease from the midseason finale last year, is a highlight. Daryl, Sasha and Abraham are stopped by a group of motorcycle-riding thugs in the road, who work for a certain baddie named Negan. Obviously, if you’ve read the Walking Dead comics, then you know that Negan is very bad news, and his gang, The Saviors, are some of the most vicious antagonists that the franchise has featured to date. Since we know that we won’t be seeing Negan until the season finale in April though, the sequence feels like a mere tease of things to come, as the lieutenant dicks with Sasha and Abraham, musing about whether or not to kill them after stealing their weapons. Eventually, Daryl blows them up with a rocket launcher, presumably as annoyed as the viewers are at these clowns. It’s an undeniably cool and satisfying sequence, and it finally makes the rocket launcher that Abraham was toying with a couple of episodes back fit into the story in a decent way.

From there though, we unfortunately return to Alexandria, where Rick, Carl, Gabriel, Michonne and the Anderson family survivors are still covered in Walker guts, and trying to creep their way through the horde. For whatever reason, this takes them hours, as it eventually becomes dark during this episode, which is the first of many glaring plot holes in this midseason premiere. Alexandria is nowhere near that large. There’s no way that it should take anyone that long to get out of town, or find refuge, or go wherever they want to go! Consequently, what were the hiding folks doing that whole time before it was dark? Were Tara, Rosita, Denise, that Wolf survivor, and whoever else just sitting around with their thumbs up their rear ends? Yes, Carol and Morgan were unconscious after that tussle with the Wolf that saw Denise taken off, but surely, everyone else could have been more proactive in the meantime.

It gets worse though, as the episode eventually has Sam just break away from Rick’s survivor crew, and then just stand there, frozen. That’s not out of the question, since Sam is a child, and given his fragile mental state, and the fact that Rick doesn’t seem to have any idea where the hell he’s going for some reason, it’s not unbelievable that he would basically break down and freeze at a certain point. What’s more unbelievable though is Sam just suddenly getting eaten by Walkers out of nowhere, which leads to a crying Jessie getting eaten, and then a traumatized Ron pulling a gun on Rick and Carl, only to get stabbed through the heart by Michonne, having him drop and get eaten in turn. That’s the whole Anderson family dead in one fell swoop, and all of them fell pretty unceremoniously.

Much ado has been made of the graphic death scene of Sam by viewers and other critics, who is brutally and bloodily eaten alive on screen, the first time that a child has died in such a fashion on the show at this point, but really, that’s not the problem with this sequence. The problem is that Sam died for nothing, Jessie died for nothing, and Ron died for nothing! Sam died in the Walking Dead comics in a similar fashion, granted, but in the printed panels, he was calling out for his mother and crying, which is why the Walkers were logically drawn to him. In the show, he’s just eaten alive for literally no reason, despite still being covered in Walker guts. It’s a stupid, exploitative sequence of events that is done as a transparent excuse to get rid of the Anderson family, now that they serve no purpose in the plot, on top of providing cheap shock value to get a rise out of loudmouths and idiots. The show will no doubt forget about the Anderson family almost immediately, and moreover, did no one think to just pull along the ten-year-old child who is definitely not heavy or strong?! Yes, you don’t want to make sudden moves that could provoke the Walkers’ ears, but that’s just it, Walkers hunt by hearing and smell, not sight! Their eyes are literally clouded over, rendering them pretty much blind, and needing to follow scents. There’s no way a Walker would suddenly detect a quiet, frozen Sam, beyond narrative contrivance!

This sequence with Ron’s death also results in Carl getting his eye shot out, which also happens around this point in the comics, except it was an accident by Douglas Monroe that caused Carl’s cycloptic state in the printed panels. How Ron shot out Carl’s eye without hitting his brain and killing him is anyone’s guess, but whatever. This at least results in one of the better scenes, which closes out the episode, as Rick eventually sees Carl at his bedside, after Denise fixes him up (yes, she’s rescued after the Wolf inexplicably reforms and dies for her, making her capture from the midseason finale completely pointless), and finally breaking down into tears, saying that he’s found hope for the first time, and finally considers himself and the Alexandrians to be part of the same unit. It would have been a fantastic emotional scene, had it not been in an episode that was so insultingly contrived.

It’s the climactic sequence of the episode however that truly takes the cake for narrative bullshit. Enid and Glenn reach Maggie, and Glenn stupidly gets himself cornered by Walkers (yet again teasing his death to the point where it really isn’t funny anymore, AMC, so stop it!), only to have Abraham, Sasha and Daryl come in and save them with some convenient machine gun fire, and have Daryl light up a bunch of gas to start burning up Walkers. That’s one thing, except Rick previously lost his mind after Carl’s maiming, and starts hacking up Walkers with a lone hatchet, which, for whatever reason, motivates Alexandria to band together and fight the horde until they’re all dead. Yes, seriously. For some reason, that’s a good idea, and not Rick’s latest boneheaded suicide mission.

Words cannot describe how idiotic this is, but I’ll do my best. Since the beginning of The Walking Dead, even a single Walker has been perceived as dangerous. Even a small group of maybe ten Walkers is something that nobody should ever attempt to fight. This made improbable escapes from those small groups by survivors like Tyreese and Glenn have impact. Now however, with this climax, The Walking Dead just throws up its hands, and becomes Dead Rising, with a cheesy friendship theme and crude weapons winning the day against a literal army of Walkers. Rick might as well have rushed out on a chainsaw-augmented motorcycle, and just run all of the Walkers down. It was that out-of-tune with the rest of the series. This is not only a horrendously lazy, unforgivably contrived ending, but it shoots the very show itself in the foot. Now, Walkers are no longer scary. They are no longer a credible threat. Like Dead Rising, they’re little more than a nuisance that you can take down with enough patience, anger, and something sharp, according to this episode. This could very well be the moment where The Walking Dead jumped the shark, which is saying a lot, given how much it’s stretched credibility since the start of Season Five. 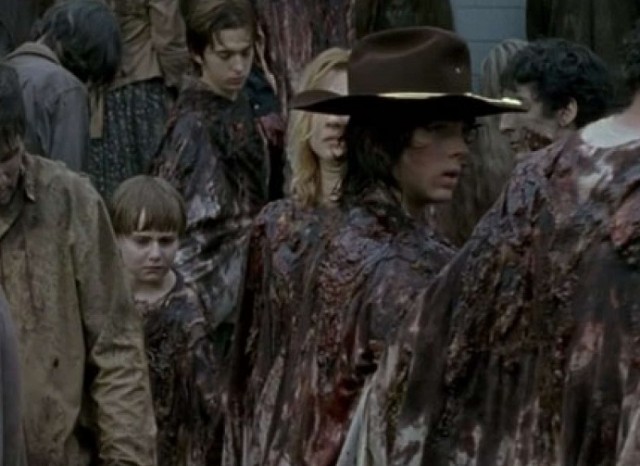 This agonizing frustration with the shoddy writing unfortunately comes in an episode that is at least more entertaining and engaging than the past few. This doesn’t change the fact that The Walking Dead still seems to be slipping gradually further into self-parody every week though. The show has to strain all the more to get its new story directions into place, and its senseless exploitation is coming at a point where the show still has yet to introduce Negan properly, a character that has defined the Walking Dead comics well with his new lows of violence and torture. By the time we meet Negan, I have to wonder if this series will have any grounded credibility left. Unfortunately, it’s getting harder to be hopeful for that every week now.

The Walking Dead 6.9: "No Way Out" Review
The Walking Dead's midseason premiere at least proved to be more interesting and engaging than the past few episodes, but became so at the expense of yet more awful writing, and one of the worst climaxes in the history of the entire series to date!
THE GOOD STUFF
THE NOT-SO-GOOD STUFF
2016-02-15
71%Overall Score
Reader Rating: (1 Vote)
40%