In a rare move, ABC has given early renewals to the vast majority of its popular and high-rated shows today. Normally, ABC is one of the most stubborn networks for waiting until the Upfronts of May to renew even their biggest and best shows that are guaranteed new seasons, though it seems that they’ve broken tradition now. 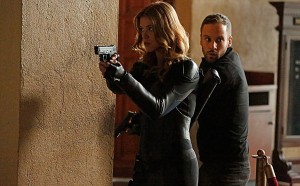 The main renewal that should come as no surprise is Marvel’s Agents of S.H.I.E.L.D., which will resume its current third season after a lengthy Winter hiatus on this coming Tuesday, March 8th. Agents of S.H.I.E.L.D. will officially be back for Season Four this Fall, and will likely also be joined by a spin-off that the network is developing, Most Wanted. While Most Wanted only has a pilot order for now, that prospective series will star Adrianne Palicki’s Bobbi Morse/Mockingbird and Nick Blood’s Lance Hunter, and will have them on the run and hunting new threats, while also joined by another recognizable Marvel Comics personality, Dominic Fortune. Marvel and ABC are also said to be developing a half-hour comedy for next season, Damage Control, though it’s likely that, if the show does go to series next season, it will no doubt be held for midseason.

Alongside Agents of S.H.I.E.L.D., ABC also renewed the vast majority of their current programming slate in advance. Officially returning for new seasons this Fall are: America’s Funniest Home Videos, The Bachelor, Black-ish, Dancing with the Stars, Fresh Off the Boat, The Goldbergs, Grey’s Anatomy, How to Get Away with Murder, The Middle, Modern Family, Once Upon a Time, Scandal, Shark Tank, and Quantico. Of these shows, only Quantico is a new series that debuted this season.

This leaves the future of some ABC ‘bubble’ shows, which could be renewed or cancelled in the end due to questionable ratings or diminishing story potential from long runs, further in doubt, though ABC didn’t officially cancel anything yet. Castle is the longest-running ABC show to not receive a renewal today, and due to declining interest, it may end up concluding this season. American Crime and Galavant also just barely scraped their way to second seasons before, which is why it’s unsurprising that they weren’t given advance renewals.

This is similarly true of Marvel’s Agent Carter, an event series that continues to be very well-received, but is also struggling in the ratings by the conclusion of its second season this week, putting it in the same boat as Galavant. ABC’s Friday night comedies, Last Man Standing and Dr. Ken, also have unknown fates for now. On this note, ABC’s new marquee comedy this season, The Muppets, had an extended hiatus and a big showrunner shake-up, though it still hasn’t delivered the ratings that the network was hoping for, so it may not survive past this season. Finally, Nashville also wasn’t renewed early today, possibly suggesting that it’s in danger of being cancelled too, due to its own decreasing ratings.

Keep tuning in to Eggplante for all major news and updates related to Agents of S.H.I.E.L.D., and ABC’s programming slate.