Despite last year’s huge development that Sony Pictures and Marvel had inked a deal that would allow Spider-Man and several of his supporting characters and villains to join the shared Marvel Cinematic Universe last year, it appears that Sony Pictures still has some exclusive claim to the Spider-Man personalities, beyond the animated Spider-Man comedy set to hit theatres in 2018. Apparently, according to a report from official Hollywood source, The Hollywood Reporter, Sony is reviving one of the dormant spin-offs that was originally planned for their now-cancelled Amazing Spider-Man movie series, that being Venom. 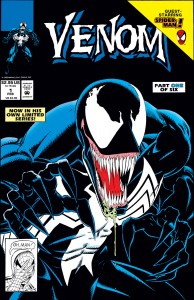 Apparently, the newly-revived Venom movie pitch will not take place in the Marvel Cinematic Universe, and will exist in its own self-contained world, or so THR claims. This version of the Venom character will also apparently not be affiliated with Spider-Man, who may not even exist in the world of Venom. This is no doubt because Sony can no longer make movies with live-action Spider-Man portrayals, unless they inhabit the Marvel Cinematic Universe, with Tom Holland portraying the live-action incarnation of Peter Parker in the MCU for the foreseeable future.

The sudden interest in reviving Venom by Sony no doubt comes off the back of the enormous surprise success of 20th Century Fox’s R-rated Marvel-licensed mega-hit movie, Deadpool, which has now made over $600 million worldwide. It’s entirely possible that Sony may be aspiring to make Venom into an independent R-rated franchise akin to Deadpool, particularly since Deadpool is also a spin-off franchise, sharing a small, seedier corner of Fox’s X-Men movie universe. The fact that Sony Pictures can do this is kind of curious though, as another planned Amazing Spider-Man spin-off that ended up being shelved, Sinister Six, is apparently being re-tooled to be set in the Marvel Cinematic Universe, according to comments from Sony’s former Amazing Spider-Man producers, and will no doubt release some years after Tom Holland’s dedicated MCU-set Spider-Man movie hits theatres in 2017. 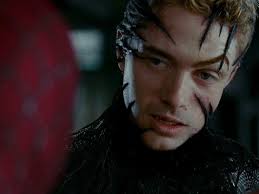 Venom was previously portrayed in live-action, as his original Eddie Brock incarnation, by Topher Grace in 2007’s lucrative, but maligned Spider-Man 3. Grace’s Venom was criticized for being shoehorned into an already overcrowded movie, with Grace being seen as a better Brock than Venom according to many pundits and moviegoers, particularly since Brock didn’t actually become Venom until the end of the movie, and was seemingly killed off at the end of the climax. It’s likely that a re-tooled version of Eddie Brock will serve as a protagonist of the new proposed Venom movie, which predictably doesn’t have a release date yet, though THR’s report claims that Sony has hired up-and-coming screenwriter, Dante Harper to pen a new treatment for Venom.

We’ll keep an eye on any potential developments with the Venom movie, so keep lacing Eggplante for all major news and updates on Marvel-licensed movie projects.