NOTE: This review may contain mild spoilers for the first season of “Fuller House.” With that said, the review is written to accommodate those who have not yet watched the season, and as such, will avoid any discussion of major plot developments.

For better or for worse, Full House is a defining sitcom of the 90’s. With its wholesome tales of family values and pure-hearted silliness, it perhaps embodied the decade more than any other show on television, with the only other sitcoms to achieve similar iconic 90’s status being Home Improvement and, to a darker extent, Married… With Children. Even with the show’s flaws, and how much it no longer fits into the modern, edgier climate of television sitcoms, there’s something quaint and likable about Full House, like a time capsule of seemingly better days to many of its fans.

Too bad we now have Fuller House then, which digs up the formerly dignified corpse of Full House, and parades it around on crude, flimsy puppet strings. Until now, it was believed that Netflix could practically do no wrong with its Original Series programming, barring some rougher first seasons for shows like BoJack Horseman and Marco Polo. Fuller House is the sad exception to one of the most prestigious and high-quality catalogues of programming in television history. To put it bluntly, its debut season is pretty bad, and at worst, it’s an embarrassing mockery of Full House’s legacy.

If you’re a die-hard fan of Full House, you may find some enjoyment in the first couple of episodes of Fuller House, which will make you nostalgic for the sitcom that you’ve always loved, and the time when it was enjoying its heyday on the airwaves, back in the late 80’s to mid 90’s. Even then though, the initial nostalgic charm of Fuller House gradually begins to wear off as Season One goes on, and by the fourth or fifth episode or so, the contrived writing and horrendously unfunny, “Humour” becomes nearly unbearable. That’s even considering that you like Full House in the first place too. If you don’t like Full House, then Fuller House will practically be seen as a means of torture for you, since it takes all of the flaws of Full House, and somehow makes them all ten times worse!

Among the laundry list of problems with Fuller House is its premise, which is unbelievably contrived and lazy. The idea behind the show is that a now-adult DJ Tanner, now under her married name of DJ Fuller (get it?), once again portrayed by Candace Cameron Bure, has recently become widowed, and has three sons that she can’t quite raise on her own, which, shock of shocks, are around the ages of DJ, Stephanie and Michelle when Full House first started in 1987. Apparently, Danny is about to sell the iconic house that Full House took place in, but when everyone sees that DJ has her hands full, Danny just decides not to sell the house, and that’s alright for some reason. Instead, a grown-up Stephanie Tanner and Kimmy Gibbler then move in with DJ, to help her raise her boys, and Kimmy’s young daughter, Ramona happens to be roped in too.

You can probably see the problem here; Fuller House is just Full House again, only with the roles reversed. Now, the show stars three women raising three boys (not counting Ramona’s daughter), with the oldest woman having a dead spouse, rather than three men raising three girls, with the oldest man having a dead spouse,and the show didn’t even bother to update the dynamic of the leads. DJ is the new Danny. Stephanie is the new Uncle Jesse. Kimmy is the new Joey. Jackson is the new DJ. Max is the new Stephanie. The infant Tommy is the new Michelle. Ramona is at least a bit of a wild card, but even then, she’s sort of played off as the new Kimmy, with the show eliminating the pretense of Kimmy constantly barging into the Tanner home during Full House, and just having Ramona live with everyone. This is lazy. This is the same show again, only now, it makes even less sense, since it’s 2016, and sitcom audiences are far more discerning of the content on their shows, especially with network censors relaxing a bit in contrast to the 80’s and 90’s, and that’s not even considering that Netflix pretty much doesn’t restrict showrunners at all!

Thus, the fact that Fuller House doesn’t even bother to try and update itself for the modern era is pretty unforgivable, even for Full House fans, who can just re-watch the classic series for a better version of this same premise. Even if you are a Full House fan, you’ll no doubt be bothered by the absence of Michelle, since Mary-Kate and Ashley Olsen (and their sister, Elizabeth Olsen) all turned down the role of Michelle Tanner in Fuller House, so Michelle just doesn’t appear. I got the impression that Michelle was supposed to be the third woman in the ensemble, before a hasty rewrite replaced her with Kimmy, and sure enough, after doing some research, it turns out that I was correct. Kimmy was supposed to be Michelle, and that’s why her character is probably the most bizarre and inconsistent, especially in regards to DJ and Stephanie either embracing or rejecting Kimmy at random, depending on the episode. Since Michelle was supposed to fill the, “Joey” role originally, it feels like the showrunners just put the ideas they had for Michelle on to Kimmy’s character, but then tried to tweak some of the storylines to make sense with how Kimmy was portrayed on Full House. This is why Kimmy goes from beautiful to ugly to lovable to annoying to confusing to wise, between scenes. Her character is kind of a mess in this first season.

Not that the other characters are much better either. The child actors are embarrassingly forced to strain for jokes by making faces at the camera and dancing around, which might be cute to nostalgic Full House fans at first, but it quickly grows annoying as the season goes on. Likewise, you can practically play a drinking game to DJ, who constantly whines about being away from her kids and not being ready to date, and Stephanie, who tells ridiculous anecdotes and loafs around the house like a leech. Oh yeah, if you’re a fan of Stephanie’s lovable, brave and witty character from Full House, you’ll be happy to know that she’s become a broke, lazy, socially stunted loser in Fuller House. I can’t imagine why any of her fans would take offense to that. Hell, even Kimmy, who was formerly portrayed as the ‘loser’ character on Full House, became pretty successful, being the owner of a party-planning business, and constantly batting off the affections of a handsome, but flamboyant Spanish soon-to-be-ex-husband, who also happens to be Ramona’s father.

Speaking of better things to do, certain episodes see isolated re-appearances of the classic Full House adults, with Bob Saget, Lori Loughlin, John Stamos and Dave Coulier all taking turns showing up when an episode doesn’t have any better ideas for its ‘new’ cast. Stamos and Coulier at least look like they’re having a good time, though Saget definitely seems like he’d rather be anywhere else during his couple of appearances, and Loughlin feels similarly tired and disengaged at times. It’s nice to see them, though they would have been better off just passing the torch in the reunion-style pilot episode of Fuller House, and not showing up after that. When the show keeps dragging them back, it just feels all the more like it’s clinging to the past, and is too afraid to forge any real new ground of its own, especially when all of these classic adult characters are supposed to have moved on to better, and more demanding, lives.

I haven’t even gotten to the worst part of Fuller House yet though, and that’s the fact that it’s just straight up not funny overall. Even worse is that the show has an infuriatingly obnoxious ‘studio audience’ that is constantly throwing canned laughter, overblown cheering and exaggerated exclaiming at even the most mundane of events, like Uncle Jesse and Becky kissing. They’ve been married for thirty years, guys! Take it down a notch! Needless to say, this audience track is extremely irritating, and makes an already tedious show even worse! That’s before almost every joke falls flat on its face with a deafening thud too. When the showrunners try to amp up this obviously false studio track behind the jokes and kisses and what have you, it doesn’t really enhance the nostalgia of Full House like it’s meant to, but instead, comes off as obnoxious and desperate, as if the show is begging you to be invested in it, when it so clearly knows that it’s not very good.

The thing that really sinks Fuller House though is the fact that it wants to pass itself off as the same lovably silly, but undeniably heartfelt product that Full House once was. It fails to do that though, since Fuller House’s episode plotlines are incredibly contrived, and both the dialogue and writing are barely any kind of reflection of real life. Almost every storyline in Fuller House feels forced to some degree, and often relies on both non-conflicts, and things going wrong because someone unrealistically chose not to speak up for literally no reason. The worst part of this forced storytelling and joke writing is when the now-grown children of Full House randomly spout their old catchphrases on Fuller House, often with no rhyme or reason, which is just pitiful, and makes you feel sorry for the actors, who are clearly uncomfortable saying catchphrases from the 80’s and 90’s that have dated like old milk. On a streaming service that’s shared with great comedy shows like Unbreakable Kimmy Schmidt, Orange is the New Black, Master of None and BoJack Horseman, this level of awful, awful comedy on Fuller House is completely inexcusable! 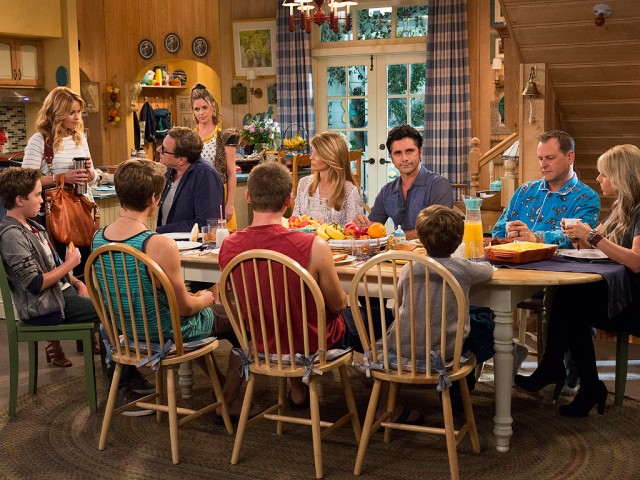 Even Full House fans will have a hard time arguing that much of Fuller House is a pale imitation of what the Tanner family once stood for on television, back in the day. There’s always the possibility that Season Two could be better (and sadly, this show has already been renewed, so we can look forward to more of it), but for now, Season One of Fuller House is an absolute disgrace. It’s not funny, it’s not clever, it’s woefully stuck in the past, and worst of all, it’s an insult to Full House. Fuller House didn’t improve a single flaw from Full House, and worse still, it made Full House’s shortcomings far worse. What could have been a more forward-thinking, heartfelt revival that delivered a more sobering, yet still uplifting look at the futures of some unrealistically idyllic child characters from an era gone by, for a firmly adult audience now, instead ended up being a lazy, unnecessary cash-in of a show that is purely done to generate easy numbers from gullible, nostalgic fans. It seems that not even the Tanner family can ultimately escape the cynical desire to exploit a legacy all over again, for its own sake.

Fuller House: Season One Review
At best, Fuller House is a lazy, unfunny and annoying cash-in on a classic sitcom's success. At worst, it's an embarrassing, unforgivable mockery that permanently stains the legacy of both Full House and Netflix in its debut season.
THE GOOD STUFF
THE NOT-SO-GOOD STUFF
2016-03-06
33%Overall Score
Reader Rating: (3 Votes)
45%