NOTE: Full spoilers for this episode of “The Last Man on Earth”, including a major character death, are present in this review

After we caught up with Mike Miller during last week’s midseason premiere, The Last Man on Earth allowed us to check in on the main group again. “Valhalla” wastes no time resolving the other half of the midseason cliffhanger either, confirming that, yes, the other Phil Miller did indeed die during Gail’s botched operation.

Fortunately, the episode still provided plenty of chipper laughs, despite the grim circumstances of the other Phil’s death, as each of the gang deals with their own separate grieving process. Melissa gets grief from both ends as well, since she’s also reeling from Todd turning down her marriage proposal, and Todd now sleeping with Gail. Carol also gets wrapped up in Melissa’s struggles to boot, as she’s torn between her loyalty to her best friend and her husband, once she learns of the dirty details behind Todd’s new sweetheart, which Phil urges her to keep quiet about at first.

The comical fallout with Melissa served as some of January Jones’ best scenes on The Last Man on Earth in a long while, as the vaguely unstable Melissa starts strangely taking a destructive stance towards much of Carol’s personal effects. This also worked well with Carol’s over-the-top pushing away of Melissa whenever they encounter each other, since she doesn’t want to deal with the whole Todd issue. This culminated in an especially hilarious moment, when a deranged Carol kisses Todd in a fit of hysteria, since she’s been driven virtually mad by having to keep his secret.

That was the big bright spot to the Todd arc, which, frankly, was the weak spot in an otherwise great episode. Todd starts trying to juggle Gail and Melissa, especially when Melissa starts trying to goad him into sub-consciously wanting to get back together with her, and Todd sort of comes off as a bit of a doofus here. He’s probably not used to two attractive women fighting for his attention, but some of his behaviour was just inexplicable. He acted needlessly shifty with Gail, and it seems unrealistic that he’d already be letting Melissa return to his side, even slightly. It’s great that the show is giving Todd a darker side in Season Two, but between this and the bacon incident from earlier in the season, this also seems to have come at the cost of a bit of the character’s likability.

Fortunately, original Phil also had a standout turn this week, with his grief over the other Phil being the most palpable and tragic. Phil tries to honour his fallen, “Brother”, seemingly ignoring that the other Phil didn’t like him very much, with a ridiculous Viking funeral at the start of the episode, not accounting for the tides nor the fact that he has no idea how to shoot a bow and arrow. Things only get funnier from there, as Phil goes on a roller coaster of emotions while digging into the other Phil’s things, including the very funny reveal that the other Phil did have a middle name after all, and it was, “Stacy.” That would no doubt explain why the other Phil lied about his middle name back in Season One, but at least it gave original Phil plenty to gripe about, moving between wailing despair and angry scorn as he tried to come to terms with losing someone that he secretly looked up to.

The show also cleverly started tying this in to the trickling of insight into Phil’s relationship with his brother, Mike, with Carol pointing out that Phil’s behaviour over the other Phil is a reflection of Phil viewing his fallen rival as the brother he never had, and like his actual brother, Phil never got to say goodbye. Obviously, the viewers know that Mike is alive and no doubt headed in Phil’s direction, but it was smart to have Phil’s grief come from a very real and relatable place, helping to offset Phil’s seemingly never-ending buffoonery once again being on display throughout the episode.

It was also surprisingly inspired to have Phil try and take over for the other Phil as the baby daddy to Erica’s unborn child, even going as far as to fix the broken crib that the other Phil made with duct tape. The scene of Erica telling Phil that the other Phil’s dying wish was for original Phil not to raise his child, was pretty funny, though also kind of sad, especially as original Phil destroys the crib anew, and then goes to pout on the beach, just in time for other Phil’s coffin to wash up on shore again. The episode did have a bit of a sweet ending here, as Phil and Erica both just decide to bury the other Phil on the beach, and say their goodbyes right as the episode ends. While this conclusion was kind of abrupt, it felt like a decent place to leave things, as The Last Man on Earth finishes with its midseason cliffhanger resolutions, before it goes on a two-week hiatus before properly returning for the rest of Season Two in April. 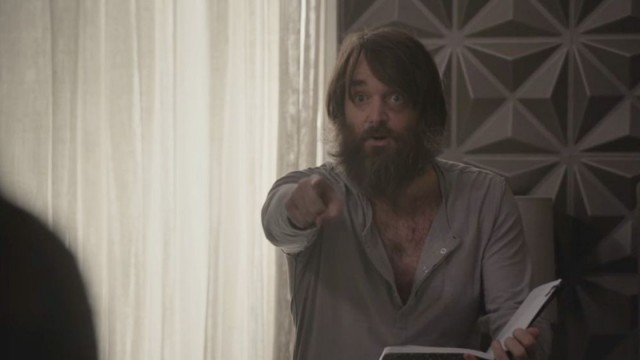 “Valhalla” was more comical than emotional, but it was still a very entertaining episode, and one that continued to kick off the back half of Season Two of The Last Man on Earth on a strong note. Everyone finding fun ways to grieve and say their goodbyes to the other Phil Miller proved to be effective, even if the whole love triangle with Todd is already starting to grate a bit. Still, even with one of their members now passed on, it doesn’t feel like the main ensemble of leads has lost a step, as tomorrow is another day, and it still looks like this band of survivors is as amusing as they ever were!