Even with the current Season Two merely coming up to its halfway point this week, AMC has already gone ahead and renewed their hit dramedy series, Better Call Saul for a third season, with the premium network making the announcement today. As with the first two seasons, Season Three of Better Call Saul will once again comprise ten episodes, and will no doubt start airing in February of 2017. 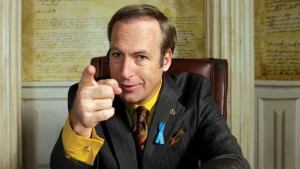 Better Call Saul has continued to garner loads of critical acclaim in its current second season, including from us in our weekly review coverage. The prequel/spin-off of Breaking Bad has endeared itself to many viewers who both have and have not watched its predecessor, with Bob Odenkirk’s lead performance being especially praised. A tie-in talk show, Talking Saul, was also introduced to the series for this season, inspired by the companion talk show of AMC’s mega-hit series, The Walking Dead, Talking Dead.

Taking place in the early 2000’s, Better Call Saul revolves around upstart attorney, Jimmy McGill, before he would become infamous criminal lawyer, Saul Goodman during the events of Breaking Bad. Struggling with legal restriction and a sense of moral crisis, Jimmy navigates the shortcomings and eccentricities of his profession when he hits a big break, though with the help of former cop-turned-fixer, Mike Ehrmantraut, he’ll find himself ultimately breaking away from the letter of the law, and will instead learn to bend the law to his whims.

Keep arguing Eggplante for all major news and updates on Better Call Saul.