NOTE: Full spoilers for this episode of “The Walking Dead”, including a major character death, are present in this review

After a couple of truly fantastic episodes over the past couple of weeks, The Walking Dead sadly ended up spinning its wheels once again for most of this week, as it gets whatever other story developments that Season Six has to address out of the way before Rick and co. make their big stand against The Saviors. While Rick prepares to take the fight to Negan’s doorstep, Denise talks Daryl and Rosita into accompanying her on a supply mission, and Eugene shows Abraham an idea of his for building munitions.

“Twice as Far” is hopefully the last filler episode that The Walking Dead has to work through before getting to a big climax over the remaining two episodes that Season Six has left, though at least some of its story elements proved to be interesting enough, even if much of the episode’s events felt disappointingly forced. The idea of Denise wanting to go out on a run was easily the highlight of this week, especially since it finally gave Rosita something to do, after she’s spent an astonishing amount of Season Six on the bench up to this point.

The Denise storyline made for a good way to focus on her character’s desire to improve, and blaming herself for not being strong enough to go with Tara when the team rescued Carol and Maggie during the events of last week’s episode. Denise initially goads Daryl and Rosita into a run by claiming to know of an apothecary with vital medication for Alexandria, only to later reveal that she had an ulterior motive of wanting to prove to herself and the rest of the community that she’s more than an impromptu sort-of-doctor. She can fight just like everyone else.

For the most part, Denise’s bravery does come through as well, though the episode also provides some welcome levity to offset her drama. Things like Denise critiquing Daryl’s ability to drive stick was pretty funny, and even a squabble over which path to take to the apothecary, with both paths leading to the same place without incident, also proved to be a nice bit of subtle humour. Yes, as usual, the idea of The Walking Dead being ‘funny’ is pretty relative, but it’s good that the show is learning to relax more, and not be afraid to have fun with its premise. The show taking itself excessively seriously is really starting to get old at this point, especially when it’s had to strain for melodrama more lately, in contrast to past seasons.

Unfortunately, things ultimately end badly for Denise, after she tries to get Rosita that special soda that she wanted, risking her life in the process, then goes on a big tirade to Daryl and Rosita, before she’s shot through the eye by an arrow, and slumps over dead! This is supposed to be shocking and horrifying… But honestly, this scene was pretty botched, and that was annoying. To start, Denise groggily continuing to talk while she had an arrow through her brain was too much, and made the scene feel unintentionally silly. Second, the shot shows the arrow going clean through Denise in a direct horizontal line, despite being shot from a downward elevation, and later being revealed as a recoil-induced misfire. So, how exactly did the physics of that arrow shot work? That makes the scene look even sillier. Finally, as much as Denise’s fate was effectively tragic, it did feel like a pretty transparent turn by the writers, who obviously needed to off Denise for story purposes with Tara later. Why would the attackers shoot Denise and no one else? Yes, the guy wasn’t aiming for Denise, but even then, why shoot one arrow, and then stop to announce yourself before an ambush? This all deflated Denise’s death scene to an annoying extent, and that was frustrating. 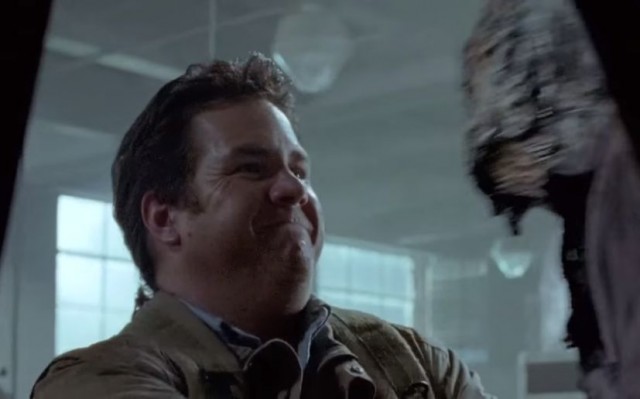 So who was behind this? Dwight! Remember him from, “Always Accountable” earlier in the season? Dwight now seems to be working for The Saviors (which makes sense, as he’s a high-ranking member of the gang in the Walking Dead comics), and has come to hunt Daryl down, and slaughter his crew as well. Dwight also lets slip that The Saviors now know where Alexandria is, which will surely spell trouble for the season finale in two weeks. Fortunately, despite getting the drop on Daryl and co. though, Eugene, who was taken hostage, manages to turn the tide by setting up Abraham to pick off some of the Saviors, allowing Daryl and Rosita to return fire (after Eugene rather painfully bites Dwight in the genitals for quite a while!), and eventually motivating Dwight and his men to retreat… For some reason. Oh, come on! Even with their losses, don’t they outnumber Daryl’s party, especially with Denise dead? I get that the show doesn’t want to lose too many Saviors before the proper introduction of Negan in the season finale, but so far, I’ve got to say, Negan’s supposedly terrifying gang of violent survivors mostly seems to consist of idiots, wimps and cowards. I guess Negan’s letting his B-squad lead the charge before Season Seven in the Fall.

At least the Eugene storyline didn’t have any real weaknesses, as Abraham predictably praises Eugene’s brains with his idea for a bullet-making operation for Alexandria, but then doubts his combat capability. After Eugene proves himself with Dwight’s crew, Abraham is forced to concede that Eugene is becoming a more reliable combat ally, and that’s really awesome to see. Oh, and Abraham finally confesses his feelings for Sasha too, which occurs right around the end of the episode. We don’t see what comes of this yet, but it’s sure to make a juicy story morsel for next week. Too bad the actual end of the episode, which had Carol leaving Alexandria, was a lot more frustrating and contrived. Even in last week’s stellar episode, Carol’s heel-turn on morality and killing came out of nowhere, and likewise, Carol suddenly giving herself a self-imposed exile is equally forced. It feels like the show just wants Carol gone from the season finale for whatever reason, yet doesn’t want to kill her off, and that’s literally the only reason that she’s left Alexandria. It’s another forced story development that viewers can no doubt see right through.

I suppose that the writers have to start laying out the pieces of story for Negan’s big introduction at the end of the season though, even if it means straining to get a few of the players into position. “Twice as Far” had to sadly waste viewers’ time for most of its duration, simply having the featured survivors mostly bumble around and not accomplish much of anything. At least Denise dying and Eugene becoming a lot more useful were big developments, as was Carol’s departure, even if it doesn’t really make sense. It’s easy to get the feeling that the episode is simply laying a foundation for bigger and better stories to come later though, which hopefully give this season a more satisfying conclusion than the weak, anti-climactic finale that we got at the end of last season.

The Walking Dead 6.14: "Twice as Far" Review
The Walking Dead meandered on a weirdly structured filler episode this week, one with decent story developments that were dragged down by a frustrating finish.
THE GOOD STUFF
THE NOT-SO-GOOD STUFF
2016-03-21
74%Overall Score
Reader Rating: (0 Votes)
0%