We’ve been hanging out with Cory Michael Smith’s Edward Nygma since Gotham first started airing in 2014, so his first proper puzzling crime as The Riddler is a big deal for this show. “Mad Grey Dawn” had Nygma taking the biggest step toward his future super-villain identity, as he devises a deadly challenge for Gordon, and makes quite an impact in the process, resulting in one of the best episodes that Season Two has delivered in quite a while!

What made this episode a huge hit is the fact that Riddler’s first crime isn’t just a throwaway. Nygma has actually devised an incredibly deadly plan for Gordon, which has him solving a series of riddles in order to recover stolen items and save civilian lives, pretty much having Nygma already be The Riddler, beyond currently lacking the name and the costume. Best of all though is that the end result is completely unexpected, and upends the show in a fantastic way, while also calling back to Gordon’s controversial actions at the end of last year’s midseason finale.

This was a brilliant way to make Nygma’s first proper go as The Riddler really work, since his riddles weren’t merely to solve crimes, but also to frame Gordon, and effectively trick him into framing himself to boot, ironically exposing him for his actual crime of killing Theo Galavan. Not only is this Riddler debut plot the most chilling that Nygma has been to date, but his plan is actually kind of ingenious, not to mention highly unpredictable, which can be disappointingly rare for Gotham’s standards, even in Season Two.

The subsequent scenes where Gordon must face his peers are also excellent, and carry tons of dramatic punch. Barnes arresting Gordon and later telling him that he’s become no better than the people he put away, on top of letting him down as Gordon’s superior, was one of the biggest gut punches, but the ones that followed were pretty brutal too. The tearful scene of Gordon insisting that Leslie move on and find a safe place to raise their child was pretty heartbreaking, and even Bullock’s determined assurance to prove that Gordon is innocent seemed to land heavily and without optimism, especially since viewers know that Gordon did indeed kill Galavan in cold blood during the midseason finale. With the episode ending as Gordon prepares to serve a 40-year sentence in Blackgate Penitentiary, things are looking pretty terrible for our hero, to the point where it even finally stirs Barbara from her coma at Arkham Asylum! True, Gordon will obviously not serve anywhere near the full sentence, but even seeing just how he regains his freedom and reputation will make for plenty of exciting storylines to come, especially now that Barbara is back with us. 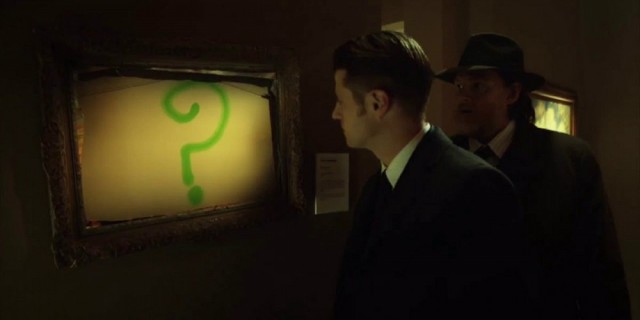 We also get a great move forward with Penguin’s storyline, as he goes to visit Butch and Tabitha, who initially want to kill him, though after Butch sees that Penguin has been rendered in some sort of weird state of permanent happiness by Hugo Strange, he decides that it’s not worth it. Even then, the idea of Butch and Tabitha letting Penguin go with a mere tarring and feathering (which predictably doesn’t bother him) is a bit of a stretch, though I guess this inexplicable plot element is a necessary evil, since we can’t have Penguin dying now, or even being maimed or crippled now, when he’s set to menace Batman in his fully villainous glory in a decade or so.

The real big storyline with Penguin came with him finally meeting his estranged father, Elijah Van Dahl, played by Paul Reubens, as a great nod to 1992 movie, Batman Returns, where Reubens had a non-speaking cameo as the father of Danny DeVito’s Penguin. Elijah is surprisingly good-natured, and is genuinely remorseful for being a supposed coward that chose his family fortune over his love for Penguin’s late mother, which lends itself well to the story arc of Penguin now being in a perpetually happy state after Hugo Strange’s experiments at Arkham Asylum. Reubens fits in perfectly with the style of Gotham, and he’s bound to be another highlight presence for the show, which has been introducing quite a few solid new personalities lately, I must say.

Bruce’s plot this week also worked remarkably well, as he starts hanging out on the streets with Selina, who takes him to a magic mushroom growth operation that happens to be overseen by, fittingly enough, Ivy Pepper, a villain-to-be that Gotham hasn’t really checked in on in a while. Even Ivy, who feels like a benchwarmer character that simply shows up every so often to tease the future existence of Poison Ivy, was put to better use than usual, demonstrating her increasing knowledge for plants and fungus to great effect, when she recommends the right batch of magic mushrooms to instantly neutralize the goons of Butch’s nephew, Sonny, who Selina plans to imminently rob. Even Ivy’s dry joke about the mushrooms causing death was exceptionally sinister, as we see her seem to slip further and further to the dark side every time we see her, even if she still currently seems like quite a ways away from actually becoming Poison Ivy at this point.

Regardless, the robbery operation goes badly, and Sonny soon corners and captures Bruce and Selina. When Selina looks to be in trouble, Bruce steps up, and takes a pretty bad beating, though also recalls Alfred’s lesson about beating a bigger man by outlasting him, a superb callback to last week’s episode where Alfred used similar tactics when fighting the boss of the Mutants gang. Even when Bruce and Selina are forced to retreat empty-handed, it doesn’t feel like a loss for Bruce’s character, who is already learning some harsh lessons, particularly about himself. The scene of Bruce subsequently confessing to Selina that the pain of his beating made him feel self-assured and free for the first time since his parents’ murder was great, and felt like a more effective way for Gotham to foreshadow Bruce’s future as Batman, without obnoxiously beating us over the head with it, like this show sometimes has a bad habit of doing. 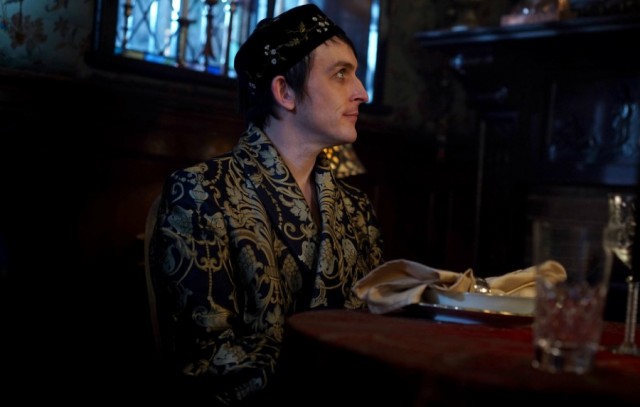 Gotham is really finding an awesome groove lately, and I really hope that it keeps up, since the character arcs and plotlines are becoming some of the best that they’ve been since the Maniax arc from this season’s front half. Every story just really worked beautifully this week. The Riddler plot tying into Gordon’s moral dilemma and killing of Galavan was very inspired, and the new developments with Penguin and Bruce are equally appealing, as both seem to settle into new families. Again, it’s a given that Gordon won’t be held in Blackgate for all that long, but his incarceration should hopefully keep this standout storytelling going strong next week!

Gotham 2.15: "Mad Grey Dawn" Review
Gotham hit an awesome high point this week, as Penguin gets in touch with his long lost father, and Nygma's first crime as The Riddler ends up having big consequences for Gordon.
THE GOOD STUFF
THE NOT-SO-GOOD STUFF
2016-03-22
90%Overall Score
Reader Rating: (0 Votes)
0%