The latest episode of Agents of S.H.I.E.L.D. would have felt like a simple filler episode, had it not been punctuated by a major development that will permanently alter the dynamic of the series as a whole, at least for the foreseeable future. Given ABC’s mounting desire to pursue spin-off series, Most Wanted next season, “Parting Shot” finally started laying the groundwork for that potential show, and separated both Bobbi and Hunter from Coulson’s outfit, with no means of returning.

I suppose that this development could be undone in some fashion if ABC somehow passes on Most Wanted after its pilot order, but I don’t see that happening, frankly. Bobbi and Hunter are no doubt gone for good to headline Most Wanted, and the episode did do a solid job of securing that exit, even if it also seemed to come at the expense of hurried pacing that almost had the show acting like it wanted to shuffle these two characters off as soon as it could. 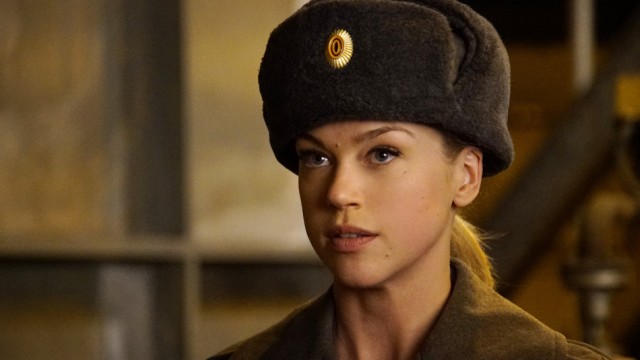 Still, the framing device of the episode, which has Bobbi and Hunter both captured and being interrogated by Russian authorities, was pretty good, and almost gives a sense of cautious optimism that they’ll once again manage to wiggle their way out of their bind. This is especially true of Hunter, who injects some welcome levity into these scenes, by proudly bullshitting his interrogator with an outlandish story of he and Bobbi going mushroom picking in the Siberian wilderness together. Maybe it’s just me, but I feel that, in another life, Hunter would have been a really good attorney!

As Bobbi and Hunter try to recount their situation, most of the episode unfolds in flashbacks, and carries on from how last week’s episode ended, with Bobbi and Hunter stowing away on Malick’s plane to spy on his plans in Russia. With the plans for an Inhuman sanctuary state now approved, Malick’s no doubt up to no good, and it’s not long before Bobbi and Hunter witness Malick’s crew showing off an Inhuman to some diplomats, who don’t want the sanctuary state to move forward. Considering a lot of the Inhuman ethical debates that have occurred this season, it was surprising to have the episode put all of that political rhetoric aside in favour of focusing on pure action, but at least it gave Bobbi and Hunter a thrilling last hurrah with Coulson’s crew, before they migrate to lead roles in Most Wanted. 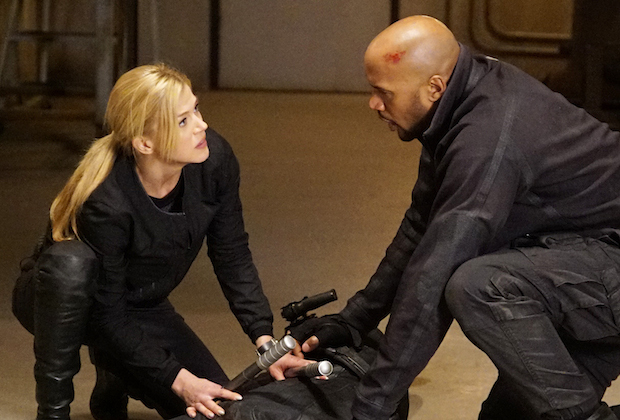 The action throughout this episode was highly well done to boot. The combination of hard-hitting fisticuffs and tense espionage made for an exciting episode, even if the exit of Bobbi and Hunter still felt a bit hasty in the end. The twist of the Inhuman that Malick had captured turning out to be the world’s first Inhuman politician was pretty awesome too, especially when the guy started attacking Coulson’s agents, with his power allowing him to strike with an invulnerable shadow self. This forced Bobbi to make the tough call of shooting the guy dead to save Hunter, which is what leads to both of them being arrested.

Even if Bobbi and Hunter’s departure is rather sudden, their exit was at least very heroic, and managed to be effectively heartbreaking. Since President Ellis can’t admit to the continued existence of S.H.I.E.L.D., and Bobbi and Hunter will be executed if they have any ties to Coulson’s team, Coulson has no choice but to disavow Bobbi and Hunter, and permanently break all ties with them. The two volunteer to willingly leave the team in order to save both the crew and themselves, and Coulson passes himself off as an Inhuman consultant to get the two off, even if he also makes it rather clear that it would be in poor taste for the Russians to execute Bobbi and Hunter, after they clearly foiled the assassination plot that Malick had put into place for the visiting diplomats that are blocking his sanctuary state efforts.

Even if Bobbi and Hunter certainly won’t be out of the action, and are poised to move on to their own dedicated show, which will no doubt be great in its own right, it was still a genuinely tear-jerking moment to see them pondering their next move in a bar, and have individual shots mysteriously come to them. Each shot comes from a separate member of Coulson’s team, between teary-eyed Simmons, Fitz, Daisy, May, Coulson and Mack, who all silently say their tearful farewells in a so-called, “Spy’s Goodbye.” It’s an emotional moment for longtime fans of Agents of S.H.I.E.L.D., which effortlessly tugs at the heartstrings, and it feels like Coulson’s crew really won’t be the same without these two, even with the promising spin-off series on the horizon for them.

Things wind down with a promising reveal for later with Malick, who is shooting discs, and is visited by his daughter! Yes, apparently Malick has a daughter. Not only that, but she’s just as sinister as he is, as she muses about Hive, and what the next move of HYDRA will be, after the assassination plot in Russia didn’t pan out. Malick admits that he isn’t fully aware of what Hive is up to, though he also assures his daughter that Coulson has no idea that Ward’s form survived in a ghastly new rendition. It all promises some great story developments later, even if it also came shortly after the loss of two important team members. 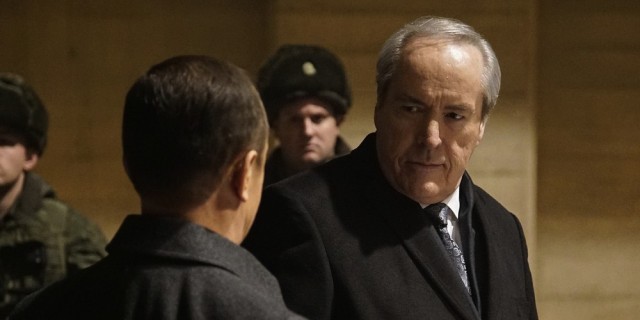 “Parting Shot” pretty much entirely felt like an hour-long excuse to nudge Bobbi and Hunter into their upcoming spin-off series, but the emotional impact and thrilling action nonetheless made the episode an entertaining watch. It’s too bad that the episode’s story felt a bit hurried, as the departure of Bobbi and Hunter is ultimately pretty sudden, though maybe that’s the idea. It’s likely that, as with Coulson and the team, we weren’t supposed to anticipate the actual moment when Bobbi and Hunter would leave S.H.I.E.L.D. That only serves to tug at viewers’ heartstrings even more, though it also comes with the uplifting promise that Bobbi and Hunter will be just fine in their new venture, just as Coulson’s crew will continue with their own.