iZombie has spent a month off the air, but at least its previous episode was one of the season’s best, and had the show poised for an exciting return this week. Unfortunately though, “He Blinded Me… with Science” is one of the less impressive iZombie offerings, even if it’s still pretty entertaining overall.

Things immediately get off to an odd start when we don’t actually see the victim of the latest case-of-the-week being murdered, which is quite rare. As with the decapitated thugs in, “Physician, Heal Thy Selfie” a few episodes back, this is likely because the network censors wouldn’t allow the depiction of the death due to its extreme violence, in this case because the victim was doused in lighter fluid and burned alive. Yikes! 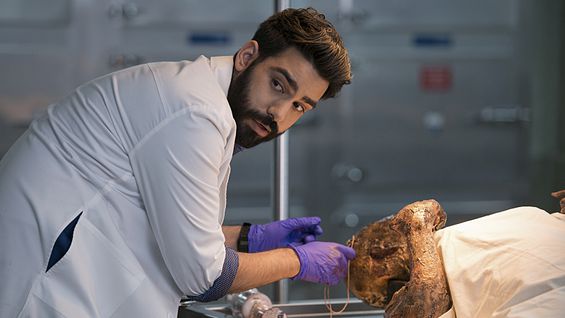 Since our latest victim is some sort of unspecified scientific researcher, Liv consumes the brain, and predictably becomes a brainiac that analyzes everything by scientific means. This could have been another neat brain idea, though it feels like a bit of a missed opportunity, since there’s very little jokes derived from this new brain. Even having Blaine on the same brain, when Ravi is forced to share it with him upon seeing that he’s become a zombie again, isn’t put to much use beyond one cute scene, and that’s a considerable missed opportunity.

As for the actual case-of-the-week, it’s not bad. It’s not particularly great, but it’s good enough for the standards of this show. Liv and Babineaux chase down connections to the victim’s former working position, which she was fired from after a scandal related to a botched acne drug, which horribly disfigured a test subject, who is the initial suspect. When it’s quickly proven that the woman didn’t commit the murder, Liv and Babineaux dig some more, and Liv even goes rogue for a bit, using her scientist brain to pose as a job applicant for the victim’s old job, which just so happens to be at Max Rager, go figure. On this note, it was very cool to have Liv use the fake name, “Gwen Dylan” for her phony interview at the lab, which is the name of the original lead character from the iZombie source comics that inspired this show. It’s not often that iZombie references its Vertigo graphic novel roots, since this show has pretty much nothing to do with its comic book inspiration, but this was a neat Easter egg for those who have actually read the iZombie graphic novels.

The case-of-the-week allows Liv to poke a little closer into Vaughn du Clark’s dealings, but all she learns is that he has a secret basement that no one except special crew can access at first. A vision later tips her off that Vaughn has full-blown rabid zombies in the secret basement, though she can’t do much with this information yet. Instead, she simply goes along with Babineaux to solve the rest of the case, with Babineaux figuring out that the actual culprit is the original suspect’s twin sister, who posed as her disfigured twin while claiming that she had plastic surgery when Liv and Babineaux first came by to interview her. It’s a fair enough twist, though it still kept the latest case-of-the-week in the ‘middling’ pile in the end.

Fortunately, this episode was carried a little better by some solid subplots, as Liv’s brain tips her off to something shady with Drake. After some digging, she learns that Drake is working for Stacey Boss, which is a great moment, even if Liv isn’t ultimately given a chance to confront her sweetheart about it. Similarly well-executed was Major coming along to scoop up Drake right as he’s about to meet Liv for said confrontation, which will no doubt further mystify Liv over Season Two’s few remaining episodes.

Blaine’s storyline was also pretty good overall, as he returns to his zombie form, and adds welcome doses of humour to a more straightforward iZombie offering this week. The initial meeting with Ravi is pretty funny, as is the one moment of Blaine and Liv sharing the same brain (again, big missed opportunity for more jokes here), though Blaine’s sudden brooding over the cure already being poised to kill him feels like a bit much. Blaine obviously won’t die, so the show wasting a bunch of time with worrying about a death that clearly won’t happen feels tedious and annoying. It’s kind of interesting to see Blaine choose to inject himself with an unproven cure rather than face death, especially with Ravi rightly bringing up that Seattle will be overrun by rabid zombies without Blaine’s business, but other than that, this part of Blaine’s storyline didn’t go anywhere.

The real standout character this week in fact was actually Vaughn du Clark, who is starting to dabble in his new prototype Supermax energy drink, making him highly productive, and highly aggressive! Vaughn’s unstable reaction to Liv punching out Gilda, believing that Major was the one who did it, was actually pretty hair-raising! The real sucker punch came later however, especially after that display, when Gilda goes down to the secret basement to study the rabid zombie that Vaughn and his researchers are poking at, only to have it get loose, leading to Vaughn fleeing and taking his secret elevator away, leaving Gilda to die in the process! Damn, that was cold, and truly cements just how horrendous a person that Vaughn really is! Fortunately, it looks like karma quickly catches up with him, as a shock-ridden and bloodied Gilda eventually shambles up to his office, and bangs on the closed door for a bit, only for Vaughn to refuse to let her in. Be afraid, Vaughn. You have no doubt created a very powerful monster, far worse than any zombies you’re experimenting on! 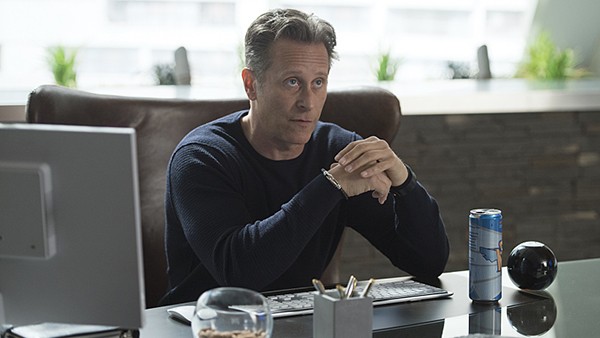 iZombie seems like it’s got some sleep in its eyes after its hiatus from February, but even in a lesser episode, the series is plenty entertaining. There were missed opportunities in the writing, especially with the latest brain that Liv (and Blaine) indulges in, but the joy of seeing Blaine return to being a zombie, and Vaughn no doubt permanently alienate his daughter, still gave this episode enough good moments to satisfy. It would be good if Liv had a more noteworthy brain to munch on next week though.

iZombie 2.15: "He Blinded Me... with Science" Review
iZombie ended its month-long hiatus with a good, though not standout episode this week, as Blaine settles back into being a zombie, and Vaughn fatally betrays his daughter.
THE GOOD STUFF
THE NOT-SO-GOOD STUFF
2016-03-23
80%Overall Score
Reader Rating: (0 Votes)
0%