Arrow’s previous episode had a rather frustrating conclusion, especially with the show subsequently taking a month off alongside The Flash and iZombie, leaving that frustrating conclusion lingering for quite a while. At the very least though, “Broken Hearts” remedies some of the frustrations that came with Felicity suddenly gaining the ability to walk again from practically nowhere, and suddenly breaking up with Oliver over not knowing about his son.

This episode also marks a welcome return for Cupid, who apparently just got released from A.R.G.U.S. with no strings attached after doing some work for the Suicide Squad. Seriously? As happy as I, and no doubt many others are to see Cupid again, the fact that Amanda Waller just shrugged and let her go feels rather unrealistic, even for a DC show. There was never any attempt to rehabilitate Cupid, or at least medicate her enough to not be an active threat to society? She isn’t even monitored in some way?! Apparently not, since, naturally, the very first thing that Cupid does with her freedom is start kidnapping and murdering celebrity couples in Star City. Nice going, Waller.

Fortunately, Amy Gumenick is still a blast as this perpetually lovesick psychopath, who is on a new crusade of declaring, “Love is dead”, since both of the men she ever fell for, Deadshot and The Arrow, are both dead, even though she doesn’t realize that The Arrow and Green Arrow are the same guy somehow, just like the rest of Star City’s citizens. Whatever the case, Cupid is declaring war on love, and that’s bad news for the city, and for Team Arrow. Since Cupid is oblivious to Oliver simply switching to a new set of threads, there wasn’t any more fun had with Cupid’s obsession over Star City’s hero, unfortunately, but at least she still proved to be a dangerous and fun baddie this week.

There was some hope given to Oliver and Felicity all the while as well, with Diggle and Thea encouraging Oliver not to give up, and lay it on the line for Felicity to really let her know that he won’t give up. Oliver even gives her a surprisingly beautiful set of vows at the fake wedding that they have to lure Cupid for the climax and take her down for the police (yes, that Ollicity wedding photo that went around the show’s marketing is a big old troll, apparently), and Felicity appears to talk Cupid down from killing Oliver by telling her all about how important love actually is, making it seem like Ollicity will be a go again by the end of the episode… But it’s not. 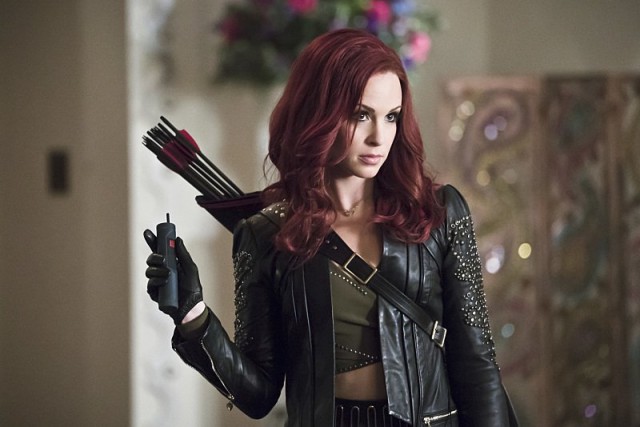 Yes, Felicity sticks to her guns, and despite Oliver laying all of his cards on the table in a last-ditch effort to repair his relationship with Felicity, she’s not having it. At least the episode better explained her flimsy reasoning for terminating her engagement with Oliver over something that his hands were rather tied on, when she says that she will inevitably have to be lied to again someday, given their station, and she can’t handle that. Felicity then acts like she’s departing Team Arrow, saying that it’s not fair to either of them to spend time together every night, even if it’s to protect the city. Again, this isn’t making Felicity look sympathetic, despite Emily Bett Rickards really nailing a standout performance this week, and her leaving Oliver still feels like it’s a bit forced. Maybe fans will get used to it in the long-term, but for now, this just feels like a hard left turn by the storyline to ensure the established DC canon of Oliver marrying Laurel in the future instead, even though most fans like Felicity better.

Oh, and speaking of Laurel, she sat out the heroics against Cupid this week, though it was for a good reason. She winds up prosecuting Damien Darhk after he is arrested and has a preliminary hearing, though the lack of evidence on Darhk doesn’t seem to be working. It’s not until Captain Lance testifies about his complete involvement with H.I.V.E., and reveals that Darhk threatened to kill Laurel if he didn’t comply, that Darhk’s trial goes through, even if it comes at the cost of Lance’s career. Lance is inevitably suspended indefinitely, pending investigation, after the hearing is over, and his sacrifice was one of the episode’s best moments. Even if he’s not donning a mask with Laurel, Oliver and the others, Lance is fighting for Star City in his own way, and that really came to the fore when he gave up his career and reputation to take Darhk down as best he could.

This week’s flashback sequences also felt like they gained some much-needed momentum, as we get our first display of Reiter dabbling in magic, upon discovering a magical idol that is very similar to the one that formerly fueled Damien Darhk’s abilities. Reiter shoots one of the prisoners and traps his spirit in the idol, almost killing Oliver, Diana and the rest as well, though Oliver and Diana manage to escape and run off with the idol, even if they wind up cornered in the tunnels, with Reiter standing in the way of their only exit. It’s a small step forward, but at least the flashbacks are continuing to return to feeling like they’re going somewhere at last, and actually demonstrating what’s so dangerous about Reiter’s obsession with sorcery.

Most of this episode was carried by the final gasps of the dead Oliver/Felicity relationship, and Captain Lance pretty much tanking his entire career to do what’s necessary in the ongoing battle against Damien Darhk (it’s looking most likely now that he’s the one in that grave towards the end of the season), as other story developments were small, though certainly not bad. Cupid’s return was pretty entertaining, as unrealistic as it is that she’d simply be let loose by Waller, and the stakes of the flashbacks are also getting a welcome boost, now that we’ve got a better taste of what Reiter can actually do with the wrong artifacts in his hands. It’s annoying to have Felicity still come off as heavy-handed and over-sensitive about the news of Oliver’s secret son, though fans can likely be comforted by the knowledge that Felicity no doubt won’t stay away from Team Arrow forever, especially since we know that she won’t be the one to die towards the season’s conclusion.

Arrow 4.16: "Broken Hearts" Review
Arrow returned from its hiatus with a good episode that offered an entertaining return for Cupid, and some heartbreaking fallout to Oliver and Felicity's break-up.
THE GOOD STUFF
THE NOT-SO-GOOD STUFF
2016-03-24
80%Overall Score
Reader Rating: (0 Votes)
0%