With Gordon and Penguin both settling into new lives, this week’s episode of Gotham had both of them facing big new challenges. There was also a solid contrast at play, as Gordon finds himself hitting bottom in Blackgate Penitentiary, while Penguin finally discovers a warm, loving home with his father, and seems to finally be finding peace at last. “Prisoners” occasionally drags with its slow burn sense of foreshadowing in both storylines, though its individual parts still offered enough engagement to satisfy.

To start, with Gordon, he naturally finds himself with plenty of enemies on the inside of Blackgate. Weeks go by as Gordon manages to make his way through a stint in protective custody, though before long, ex-Commissioner Loeb pulls some strings to get Gordon out of his protective custody, and place him in F-Wing, a.k.a. Gen. Pop, where he’ll be surrounded by a bunch of inmates that he put away while on the police force. Obviously, the plan is to kill Gordon, and Loeb no doubt still harbours a grudge from Gordon removing him from his post a while back.

The scenes where Gordon must try to stay on top of the murderous inmates are pretty good, especially when threats truly seem to be around every corner. Even the warden himself is out to get Gordon, making not-so-veiled threats that indicate Gordon’s diminished chances of survival, especially with Loeb’s former connections actively working against him. Gordon at least manages to win the favour of a kindly guard named Bishop, as well as an optimistic inmate named Puck, though so far, it seems like death is pretty much certain to come to him sooner or later.

Seeing Gordon find ways to keep coming out on top, even after losing everything, proved to be nicely appealing, though Puck’s character felt like a bit much at times. It was interesting to see a young man who somehow found himself untainted by the heinously corrupt Blackgate, though his unrealistically naive attitude bordered on coming off as caricature at times. Unless there’s something mentally wrong with this guy, there’s no way that he would be taking savage beatings and leaping into inmate brawls with a smile on his face, having no evidence of pain or hardship himself. Even Puck’s abrupt death at the end of the episode, which seems to occur right at the end for practically no reason (I guess he’s implied to have died from injuries after inmates beat him, despite being fine a moment ago), feels abrupt and weird, and this character never truly feels real in the end. 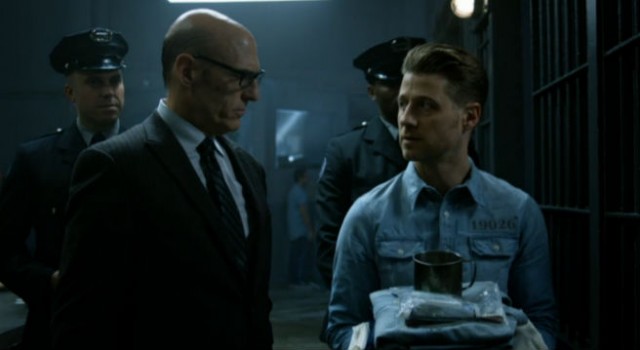 Another frustration with this episode is the revelation from Bullock after visiting Gordon that Leslie lost the baby off-screen. Oh, come on, are you kidding me?! Yes, Gordon doesn’t ultimately have any children with Leslie in DC Comics lore, but even so, having him end up with Leslie instead of Barbara would have been an interesting way for Gotham to continue forging its own unique canon that’s independent from any prior Batman media. Having Leslie just lose the baby out of nowhere, especially that far into her pregnancy, feels like lazy writing, not to mention a total cop-out, since the show has used the baby to foreshadow a better life and higher stakes for Gordon and Leslie throughout much of Season Two, and that’s just no longer there, because the plot says so. Even Leslie just, “Moving South” and disappearing feels forced and unrealistic, especially given the huge fight that Leslie put up for Gordon not one episode ago!

Fortunately, Bullock elevated the episode a bit when he was forced to turn to a surprising old connection to spring Gordon; Carmine Falcone! Yes, somehow, Bullock got Falcone back to Gotham City, just in time to plead for his help in getting Gordon out of Blackgate. Thanks to some creativity, and the work of the kindly guard, the plan is successful, as Gordon is saved from an unceremonious stabbing death by a fake shiv, and smuggled out of the prison, even if he insists on taking Puck with him. Again, this proves to be for nothing, since Puck just dies a few moments later at random, but I guess this is a good way to demonstrate that Gordon hasn’t forgotten to be a hero, just as we know that he’ll elect to go back to Gotham City instead of fleeing the country when Falcone offers, since that’s just who he is.

The Penguin storyline sustained itself on more quality bonding moments between Penguin and his father, and the chemistry between Robin Lord Taylor and Paul Reubens continues to excel here. It’s truly easy to believe that Penguin could give up his violent ways and settle into a family life, even as Elijah is revealed to be falling ill. As suspected, his wife and stepchildren are snakes that are after his fortune too, and they attempt to use Penguin’s former criminal dealings to try and remove him as an obstacle to the family fortune.

Surprisingly though, Elijah completely forgives Penguin for his past life as a criminal, leading to his wife simply electing to poison Penguin. It was a great twist to have Elijah accidentally drink the poison instead though, right before promising Penguin his entire fortune and estate, and right before dying in Penguin’s arms, immediately after confessing the violent urges that plague some of the Van Dahl men, including Penguin’s grandfather, who ultimately took his own life. It feels like this is the first step to conveniently undoing all of that blissful Hugo Strange therapy that Penguin has been on for the past couple of episodes, but the loss of Elijah is still a heartfelt one, especially as it appears to redirect Penguin to the inevitable path of violence that he’s bound to find himself on, despite any efforts he makes to escape it.

“Prisoners” is a noticeable step down from the standout, “Mad Grey Dawn” from last week, but it was still a mostly good episode that effectively pushed Gordon and Penguin through their new living spaces. It was cool to have the effective contrast between the two storylines, even if we saw nothing of the GCPD or the Bruce/Selina storyline this week, and it was also cool to have the characters seemingly end up in opposite positions by the end of the episode, as Gordon no doubt prepares to re-enter Gotham City and continue his crusade against evil, while Penguin loses the one family connection that possibly could have saved him from his evil heritage. The established order is bound to be restored soon, but for both Gordon and Penguin, the battle to come will still demand quite a lot of sacrifices!

Gotham 2.16: "Prisoners" Review
While it's occasionally rather slow, Gotham's latest episode provided two solid plots for Gordon and Penguin this week, as both find themselves in the midst of big trouble.
THE GOOD STUFF
THE NOT-SO-GOOD STUFF
2016-03-29
74%Overall Score
Reader Rating: (0 Votes)
0%