After a mountain of fan demand, CBS has capitulated to crossing over their Supergirl universe with The CW’s DC Television Universe, or at least a third of it. “Worlds Finest” marks the hugely anticipated crossover episode of Supergirl, which intertwines itself with DC’s CW series, The Flash, as Grant Gustin’s title hero ends up accidentally trapped in the parallel world of Supergirl.

After some of the frustrating failings of DC’s big screen superhero team-up movie, Batman v Superman: Dawn of Justice after it hit theatres this past weekend, “Worlds Finest” really did serve as the perfect dessert to make up for some of the disappointment that the movie may have created for DC fans. This was a superb crossover episode, and one that presents great promise for crossing over DC’s television universes again in the future! 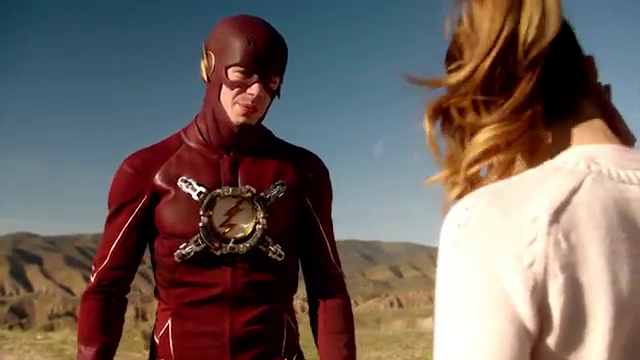 A big strength out of the gate is the real-life friendship between Melissa Benoist and Grant Gustin, naturally, who already met and worked together on the set of Glee several years back. Benoist and Gustin are definitely savouring the reunion, and are having tons of fun pairing up their heroes, which gives the episode an incredible sense of energy and charm. Little touches with the other characters also work well to boot, such as a geeky bromance between Barry and Winn, James getting rather noticeably jealous at Kara hanging out with a new super-powered buddy, and Cat suggesting a series of disagreeable names for the new hero that’s appeared in National City, and saying that, “The Flash” is what you would call an alleyway pervert. Even the fact that Cat sniffed out Barry being The Flash immediately was pretty funny, as she reveals at the end of the episode, also making a sly reference to the fact that she still has her suspicions about Kara being Supergirl, despite the clever trickery with Hank several episodes back.

In fact, it was a huge bummer that Alex and Hank were both absent for the crossover, even if it makes sense, given how last week’s episode ended. Having Martian Manhunter sit out a chance to meet The Flash by itself feels like an enormous missed opportunity though, just as Alex interacting with another powered hero would have been interesting to see. Perhaps it’s more incentive to cross Supergirl over with The Flash again in the future though, or perhaps bring Kara into The CW’s DC Television Universe by some means, where she can meet other characters like those on Arrow or Legends of Tomorrow. 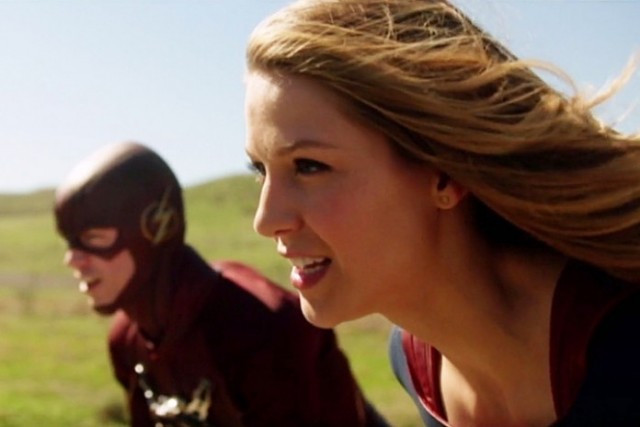 Either way, the DC Multiverse in-jokes and references were equal parts funny and cool (apparently, Barry has traveled to the evil doppelganger-filled Earth-Three off-screen, among other places!), and the revelation that The Flash, Green Arrow, Firestorm, The Atom and Zoom don’t exist on Supergirl’s Earth, despite it having its own version of Central City without S.T.A.R. Labs, was an intriguing one, suggesting that there are no heroes in the Supergirl universe beyond the Superman family and Martian Manhunter at this point. On the flip side, this also seems to indicate that the Superman family doesn’t exist in The CW’s DC Television Universe either, at least not at this point, since Barry has no idea who Supergirl is at all, let alone Superman.

The villains in this crossover episode were also well-chosen, and this offered an entertaining team-up for the bad guys as well. Silver Banshee being one of the baddies was inevitable, as Siobahn discovered her sonic powers at the end of last week’s episode, which apparently stem from an ancient curse placed on Siobahn’s family after one of her ancestors stole from a Banshee in Ireland. Siobahn’s Silver Banshee garb is a little overdone and weird, especially when it’s apparently just thrown together by Livewire, but whatever. It’s nonetheless cool to have Siobahn finally embracing her super-villain heritage as Silver Banshee here.

Oh yes, Livewire is back in the crossover, marking the other half of the villain team-up, and Leslie Willis is as fun and entertaining as ever, since her debut appearance in “Livewire” around the start of the season. Livewire is one of Supergirl’s strongest guest villains to date, and she played very well off of Silver Banshee. Both characters lent themselves to some pretty strong and enjoyable action scenes, culminating in a pretty good climax within the National City Park, after they both take Cat Grant hostage. Why they didn’t just kill Cat, I don’t know, but I guess they wanted to make a public display of sticking it to not just one, but two different superheroes in one go.

Mostly though, this provided an excuse for a self-sacrificing scene by Kara, who shields a helicopter from one of Livewire’s electric blasts, and severely injures herself in the process. After this, the citizens rally around her and put themselves on the line, right as the same firefighters from, “Falling” a couple of weeks ago spray some water on Livewire, which overloads and subdues her, also knocking out Silver Banshee from the resulting electric burst. As neat as it was to have the villains be taken out by ordinary folks coming to Kara’s aid, it was a little bit rushed to have the city immediately forgive Kara because of one heroic act. Livewire herself even points out that the city’s population wanted to string up Kara just one week ago, and that their reaction doesn’t make sense. When even the villains of an episode are pointing out a plot hole, that’s not good.

In the end, we do get that all-important race between Kara and Barry to compensate, though it is pretty brief. Still, it provides a clever way for Barry to return home, as the combined speed of both heroes allows Kara to throw Barry so hard that he flies through the dimensional barrier and presumably lands squarely in The CW’s DC Television Universe again. Kara even celebrates afterward by finally kissing James!… Except Non has just activated Myriad, which means that everyone in National City is now rallying around the evil Kryptonians, likely to serve as some sort of army for Non’s crew. This is where we leave things, as Supergirl begins setting the stage for its season finale in a couple of weeks, and the show starts to move toward the climax of its current run. 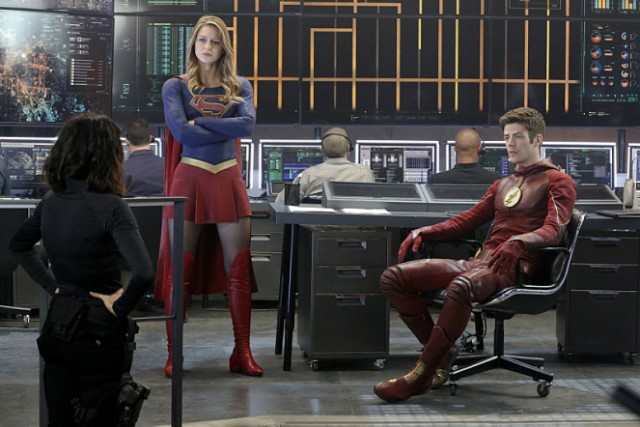 “Worlds Finest” was far more than a gimmick episode, and served as another highlight for Supergirl’s first season. The inclusion of The Flash served the story well, without overtaking the rest of the episode’s events, and it was satisfying to have there be no animosity or distrust between the two DC heroes teaming up for a change, instead just having them immediately enjoying themselves and becoming fast friends. I hope that CBS and The CW cross over their televised DC Universes again in the future, as there’s still tons of possibility from linking these shows, especially when this first attempt turned out as well as it did. For now though, it looks like Non’s plans are starting to come to light, seemingly indicating that Barry got back to his world before things really got bad on Kara’s Earth!