Lucifer really soared with, “A Priest Walks into a Bar” last week, presenting a pretty tough act to follow for this week’s offering. Despite the show’s usual uneven episode quality though, “Pops” remained a pretty good episode, and one that once again provided a better balance between the show’s supernatural side and procedural side than usual.

After the loss of his priest friend during the previous episode, Lucifer has a renewed contempt for God, and that came to the fore in a strong way in, “Pops.” Our latest murder victim, a celebrity chef with a reputation for his bad temper (in one of numerous Gordon Ramsay references that modern television seems to love making), presents a case where any one of his employees is a suspect. It’s an initially interesting setup, even if the show abandons said setup pretty early on, in favour of another story direction entirely.

In the end though, the altered story mechanic would have been better than a probing of each individual employee at the victim’s restaurant, which would have yet again had Lucifer treading close to being yet another tired crime procedural on television, again. Instead, Lucifer singles out the victim’s son, an aimless former drug addict that met with his father for one last meal, where Lucifer believes that the deed was done. When the only other suspect, the sous-chef, appears to have been poisoned herself, albeit not fatally, this seems to confirm that the son is guilty.

The big strength with suspecting the son is that it provided a neat parallel in which Lucifer could examine his relationship with his own father, even if his own father happens to be God. Like the victim’s son, Lucifer sees himself as a downtrodden soul who could never quite get his father’s approval, and ultimately decided to stand against everything that his father believed in as a result. The fact that Lucifer would try so hard to prove that the victim’s son is guilty is pretty telling, making great reference to the inner conflict that now brews within Lucifer, not just from his growing mortality, but also the priest’s haunting final words, which suggest that God’s plans for Lucifer may not be over yet.

Naturally, the son is a red herring, but the case’s turnout was actually not bad, and fairly unpredictable. Turns out, the sous-chef was guilty after all, and had poisoned herself to make herself look innocent. Not only that, but she meant to kill the son, who would have threatened her prospects of taking over the restaurant. This also led to a climax of Lucifer having to rescue Chloe from a burning building, where he’s yet again reminded of his mortality when he’s burned by fire. Obviously, that’s incredibly ironic, but it nicely goes to show that Lucifer’s mortality continues to become more apparent with every episode.

As for the subplots at play, they tended to range in quality. It feels like the episode is trying to move characters into certain new positions, now that there’s only three episodes left in the season, and some of these storylines definitely worked better than others. The chief subplot involves Chloe’s mother, Penelope coming back to town, which has decent moments, even if it is a bit of an overdone subplot style of Chloe having to, “Be the adult”, due to the immature tendencies of her B-movie star mother. This does lead to a fairly decent scene of Lucifer wrecking a nice dinner that Penelope was attempting to have for herself, Chloe and Dan, by immediately blurting out everyone’s dirty secrets and pissing everyone off, though considering that transgression, he’s sure forgiven rather quickly. It might have been more interesting if Lucifer and Chloe had become a bit estranged for a while, even while still having a case to solve.

Regarding everything else, the scene of Trixie going to Lux and meeting Maze was kind of cute, even if it begs the question of how she got there. First, why in the world would an Uber driver pick up a little girl and take her to a nightclub when her parents are nowhere in sight?! Second, how did Trixie just walk into the club without obstacles? Again, aren’t there people that would notice a little girl going into a nightclub in the middle of Los Angeles, particularly a fairly famous one? This does at least lend itself to an interesting idea of Maze wanting to redefine herself and make friends, with her taking a liking to Trixie, and even seemingly attempting to hang out with Linda afterward, though we don’t get to see where this goes. Maybe in the next episode.

Things end with two promising teases for things to come, as Dan attempts to arrest Malcolm, and is instead knocked out and captured. Malcolm then responds to a text from Chloe by pretending that Dan doesn’t want to get back together with her, leading to Chloe showing up drunk at Lux, and attempting to seduce Lucifer. Yes, it’s finally happening!… Or not. Surprisingly, Lucifer turns down Chloe, despite trying to sleep with her from day one, which confuses both of them, especially when Chloe realizes that she’s acting like her mother. Chloe going on a drinking bender and immediately throwing herself at Lucifer does feel a tad contrived, but at least it finally seems to put the sexual tension between Lucifer and Chloe to bed, pun not intended, at least for now. 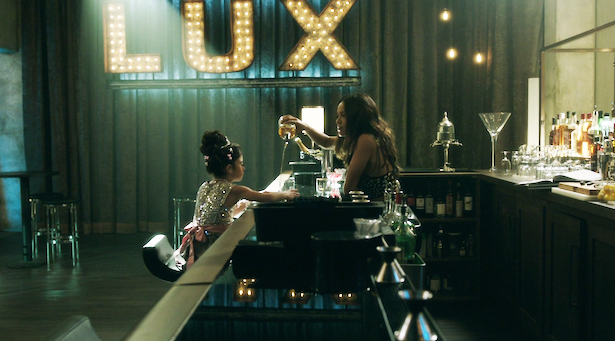 Lucifer delivered a fine episode this week, and so far doesn’t seem to be hitting another lower point after its big successes. Predictably, “Pops” doesn’t measure up to last week’s superb episode, but it’s still a solid offering in its own right. The case-of-the-week was pretty decent, and tied itself well into Lucifer’s ongoing character conflict, while the other characters also got some cool new developments, even if some were ultimately better than others. The show seems to be starting to find its groove a little bit more, just in time for the season to be approaching its climax. That’s a promising sign, and with Lucifer taking next week off, hopefully it comes back afterward with another especially strong episode to start amping up to the season finale at the end of April.

Lucifer 1.10: "Pops" Review
Lucifer delivers a pretty good episode this week, with another case that effectively ties into Lucifer's supernatural struggles, even if the subplots are more uneven.
THE GOOD STUFF
THE NOT-SO-GOOD STUFF
2016-03-29
80%Overall Score
Reader Rating: (1 Vote)
100%