After getting a bit distracted with the supporting players over the past couple of weeks, Better Call Saul returned the spotlight to Jimmy pretty much exclusively this week, though this was very welcome. Now with Jimmy’s ongoing character conflict once again in focus, “Inflatable” was able to piggyback off of the recent developments with Mike and Kim, though did so in a way that culminated in a massive, yet satisfying shift in Jimmy’s prospects by the end.

Things kick off with Mike attempting to own up to the gun charge, in response to Hector Salamanca’s threats and payoff, though surprisingly, the police don’t buy it. Apparently, they anticipated Tuco and/or Hector trying to intimidate or bribe Mike into reducing Tuco’s sentence, and refuse to allow Mike to amend his testimony. It was awesome to see Mike’s internal code still apply to protecting Hector for want of a deal, even if it’s clearly of no benefit to Mike. In a way, Mike’s harsh honesty provides the perfect foil to Jimmy’s more slippery, law-bending ways. It makes a twisted sort of sense that these two would be allies in their individual agendas, despite outwardly appearing to hate each other. 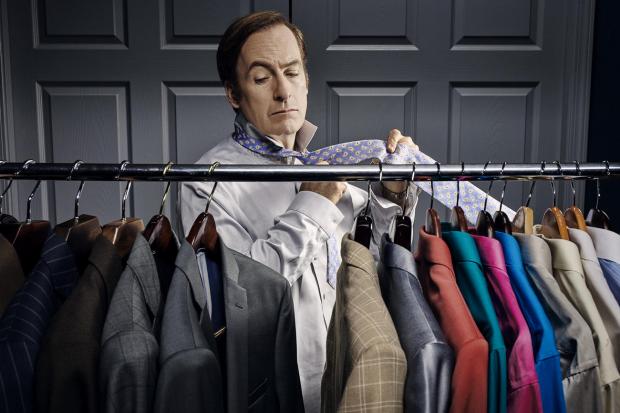 Even as Mike tries to take the gun charge however, and use the money he earned from it to move his daughter-in-law and granddaughter to a better house, the episode doesn’t really focus on Mike at all beyond that. Instead, Jimmy’s storyline quickly overtakes Mike’s, particularly as Jimmy starts really getting antsy at Davis & Main. When he decides that he’s had enough and wants out, he learns that he will forfeit his big bonus if he quits. In response, Jimmy enacts a series of increasingly ludicrous schemes to try and annoy the firm into firing him.

This was very funny, and was probably the funniest that Better Call Saul has been in quite some time. This show is supposed to be a dark comedy, but it’s also been focusing more on the tragic element of its characters recently. It was satisfying to have the show give Jimmy a chance to once again flex his comedic muscle, as he does things like play bagpipes, blare juicers, and even take dumps in the toilet without flushing, and bluntly admit to it in front of everyone. This is supposed to be the same character that accidentally got a sex offenders’ charge for relieving himself into the sunroof of a guy he hated, without realizing that his kids were in the car, and it was great to get a throwback to that more off-the-wall crazy version of Jimmy in this episode. 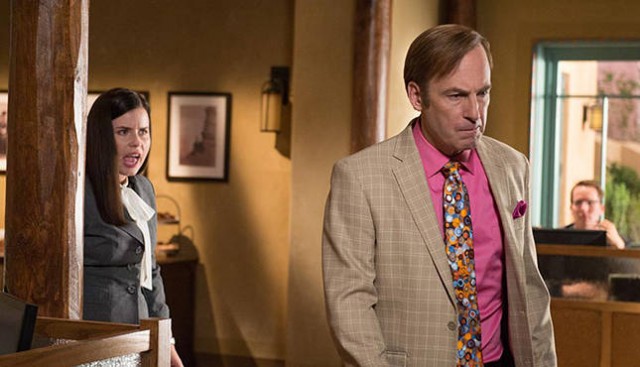 All the better is that Jimmy gets what he wants, and ends up being fired from Davis & Main. While this would be a very bad thing to most people, it was an odd sort of victory for Jimmy, as this ensures that he can keep his bonus, since he was fired without cause in the eyes of the law. Moving back into the back room of the nail salon, Jimmy once again sets up his old shop, simply admitting that he’s a, “Square peg”, and just has to do things his own way. As much as there’s triumph in that, there’s also an undeniable air of tragedy too, especially since we know that Jimmy will seemingly head for a big fall in the future, even if it takes place after the events of Breaking Bad have concluded.

The other big development in this latest episode is Jimmy making a big pitch to Kim, presenting a legal firm where the two would be partners together. This seems like a pretty uplifting new direction for the show, but of course, things can’t be that simple. Kim turns down the offer, initially leaving Jimmy crushed, though after a slip-up in the subsequent interview with her new prospective law firm, she re-thinks the idea. Visiting Jimmy again in his new/old office, Kim amends the proposal to suggest something else; Having the two share a building and expenses, but remaining independent lawyers that aren’t partners. The episode ends as Jimmy deliberates this big decision, and it could honestly go either way. This is probably as good as it’s going to get in terms of Jimmy’s chances to have a law firm with Kim. Is he going to go for the amended proposal?

Regardless, Better Call Saul seemed to regain its slightly diminished sense of rhythm over the past two episodes this week, and once again delivered a new highlight episode for the season in, “Inflatable.” Providing an exceptional balance between humour and drama, and pushing the character arcs of Jimmy and Kim forward in an excellent way, this episode once again had this series firing on all cylinders. The prospect of Jimmy and Kim finally working together is a fantastic new storyline, and hopefully, Jimmy grabs on to this last chance to be something better, even if we can probably anticipate that things are yet again not going to go as planned for him.