If you didn’t end up being invited to the recent closed multiplayer beta of Doom, and were hoping to get a chance to play the game ahead of its launch next month, then rejoice! Bethesda has announced an open beta session for Doom, which will be available on PC, PlayStation 4 and Xbox One alike, and will allow anyone with their preferred platform hooked up to the online gaming scene to join. 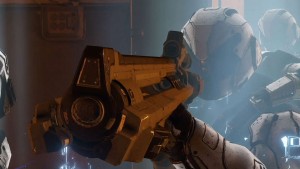 The open beta for Doom will go live on all three platforms at 12:00 A.M. EST on April 15th, and will run until 11:59 P.M. EST on April 18th. The open Doom beta appears to be offering much the same content as the recent closed Doom beta that was exclusively offered to those who pre-ordered or purchased an early-run copy of Wolfenstein: The New Order on any platform. It will allow players to sample a handful of weapons across two modes, Team Deathmatch and Warpath, and will span two of the game’s multiplayer maps, Heatwave and Infernal. Bethesda has said that this is just a, “Fraction” of what the final game’s online multiplayer suite will offer.

Along with revealing an open beta session date for Doom, Bethesda also announced three DLC packs for the game, which will each be sold for $14.99 USD, or bundled together in a Season Pass for $39.99 USD. In the case of the first DLC pack, three new multiplayer maps will be offered, along with a new playable demon, a new armour set, a new piece of equipment, a new weapon, new hack modules and taunts, and finally, new customization colours and patterns for your multiplayer avatar. Beyond the paid DLC, Bethesda and id Software will also be supporting Doom throughout the rest of the year with various free content updates as well, not just in the online multiplayer suite proper, but also in the custom SnapMap mode.

Doom is set to launch on PC, PlayStation 4 and Xbox One on Friday, May 13th.

Keep beckoning Eggplante for all major news and updates on Doom.