Melissa McCarthy is one of Hollywood’s top comedy actresses at this point. She’s an immensely, powerfully talented woman, who can bring the laughs practically any which way she chooses. That said however, Melissa McCarthy also needs some degree of creative control to maximize her talents. That was really proven in 2014 with Tammy, a very unfortunate disaster of a comedy that sadly marked McCarthy’s first proper film collaboration with her budding director husband, Ben Falcone, who formerly made cameos in McCarthy’s various projects.

Despite the failings of Tammy, McCarthy and Falcone are nonetheless determined to try again with another movie collaboration, The Boss, formerly announced as ‘Michelle Darnell‘, after its lead character, a movie that has now hit theatres. The good news about The Boss? It’s at least noticeably better than Tammy. The bad news? It’s still nowhere near as good as the likes of McCarthy’s big recent highlight movies such as Bridesmaids or Spy.

Being boilerplate and forgettable over being truly bad might sound like faint praise for The Boss, which is about what you would expect for a filler comedy released in April, but if you happened to see Tammy, you might recall the old adage of progress being a greater virtue than perfection. If you’re a big fan of McCarthy’s, you’ll find an acceptable diversion in The Boss, though you could just as easily wait for it to release on home viewing, especially since April seems to have so many other, more promising movies hitting the big screen this year.

Melissa McCarthy’s Michelle Darnell doesn’t break any new ground for McCarthy as a comedian or an actress. She is exactly the kind of character that you would expect McCarthy to play, specifically the obnoxious, loudmouthed, abrasive personality that kind of steamrolls over everyone with her sheer level of goofy might. Fortunately, the obnoxiousness is toned down after the rather unlikable character that McCarthy played in Tammy, though Michelle Darnell is still a very by-the-book McCarthy personality, for better or for worse.

That said, there’s a good reason why Melissa McCarthy is such a big, popular comedy actress these days, and that’s because, even if she’s a bit one-note at times, she’s still incredibly talented. That remains true in The Boss, a movie that is predictably carried almost entirely on McCarthy’s shoulders. When the dialogue and certain comedy sequences work in this movie, they work really well, especially with McCarthy sneaking in what appear to be some very effective and funny ad-libs in various scenes. There’s still times where McCarthy would have benefited from more oversight than her husband has obviously given her on a film set on any given occasion, but for the most part, she’s reliably funny throughout much of The Boss, and that should please viewers who like her as a comedian.

Working alongside McCarthy in The Boss is Kristen Bell, playing lonely, by-the-book single mom, Claire. Bell is fine and good in the part, though it’s a pretty stock part. Almost anyone could have played this role, frankly, since there’s not a lot of meat to it. If anything, it’s Claire’s daughter, Rachel, played by Ella Anderson, who is a little bit more distinct, being the inquisitive and impressionable mind that serves as the gateway to Michelle and Claire making each other better people. In fact, a lot of the child actors in The Boss are surprisingly funny, and even outclass some of the adult performers at times, even if most of the movie remains McCarthy’s show most of all.

There are various other supporting roles that are mostly played for gags beyond McCarthy, Bell and Anderson, such as a cameo by Kathy Bates as Michelle’s mentor, Ida, which largely just seems to be placed there for its own sake, given the frequent collaborations between McCarthy and Bates in the past. The closest thing that The Boss has to an antagonist is Peter Dinklage, who mostly just pokes around every so often to foreshadow a third act and climax, which, unfortunately, is the point where The Boss really falls apart. Dinklage really tries his best, but his character is just crippled from the get-go, since he strains the movie’s already shaky credibility to breaking point. 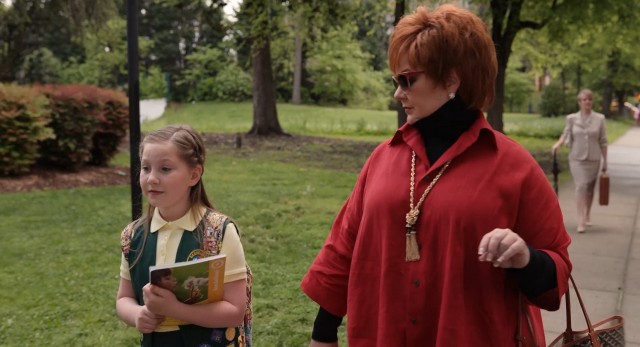 So, much of The Boss is dependent on your tolerance level of Melissa McCarthy. You can almost entirely gauge your chances of being entertained by the movie by how much you’re entertained by McCarthy overall. There are a handful of other decent personalities and jokes that manage to boost the movie beyond McCarthy’s talents, but they don’t come nearly as often as the talent emphasis on McCarthy herself, with Kristen Bell and Peter Dinklage mostly just serving as tag-alongs in a movie that is clearly written to glorify someone else.

The Boss follows pretty well-trodden territory as far as comedies go. It’s an age-old movie tale of two unlikely friends becoming better people when they’re tossed into a shared circumstance together, in this case, when lead character, Michelle Darnell has to rebuild her business credentials, with the help of the former assistant that she never properly gave her dues.

At the start of the movie, Michelle, a billionaire businesswoman and self-help corporate media personality, is thrown into a white-collar prison for several months for insider trading, and afterward, has her assets frozen, her property seized, and is essentially left with nothing. Forced to turn to her downtrodden former assistant, Claire, she decides to make a paid alternative to the non-profit Girl Scouts/Brownies program, called the, “Dandelions” in the movie, to avoid any legal trouble with the real-life Girl Scouts organization. Honestly, this isn’t a bad premise either. It has a certain degree of comedic possibility, and is grounded enough to feel credible, while not completely being shackled to any sense of realistic progression.

That’s why it’s really disappointing that The Boss can be so uneven with its comedy. Its story is already pretty bog standard, and that leaves the jokes to sustain everything else. With the movie being so all over the place, the story just ultimately ends up being very forgettable, and a bit of a waste of a solid central idea. At least it’s got plenty of Melissa McCarthy though, for what that’s worth.

McCarthy’s husband, Ben Falcone is just starting out as a comedy director, and has very limited experience as a comedy writer. To say that Tammy was a rough draft back in 2014 would probably be the diplomatic way to leave Falcone’s first proper effort. Fortunately, his directing does show some improvement in The Boss, with Falcone getting a better idea of how to set up scenes, and how to manage comedy ideas, even if he still undeniably slants the movie in favour of glorifying his wife over the rest of the production.

Falcone’s main weakness as a comedy director at this point is that he’s still too scattershot. He still has a sense of throwing any ideas he devises with McCarthy at the wall, and just seeing what sticks. When jokes work in The Boss, they will get some solid laughs out of audiences, but when they miss, they miss to the point of being borderline cringe-inducing. For whatever reason, Falcone and McCarthy have a weird fascination with hip-hop jokes and slapstick fights for example. The latter is one of the main reasons why the third act really falls apart, since it just spirals into full-blown cartoon territory with a ludicrous scenario that would obviously never happen in real life. That would be fine if the entire movie was played as a ridiculous farce, but when it tries to be a heartfelt story of finding family and the real value of the world being people, that sort of shift in story direction can be jarring and uncomfortable. 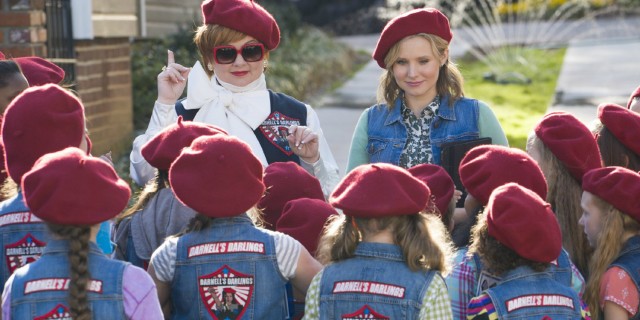 That shaky climax is certainly not the only time that The Boss has a rather distant relationship with realism, as a couple of other sequences also really stretch the boundaries of logic, to put it mildly, though some of the other crazier sequences at least manage to be funny, if you’re not aiming to take this movie too seriously. Falcone and McCarthy both have a long way to go in terms of discipline and restraint when it comes to thriving with a lack of oversight that would otherwise rein them in when they get too out of left field, but at least The Boss represents proof that they are capable of improving as an independent team of comedy makers, even if this movie’s direction is still far from perfect.

The Boss is nothing special, and likely could have been a far better comedy in a more esteemed director’s hands, but for Melissa McCarthy fans, it gets the job done. If nothing else, the movie proves that McCarthy and her husband’s filmmaking pedigree doesn’t stop at the lacklustre standard of Tammy, and that’s good news, though it seems like both McCarthy and Falcone still struggle to be consistently appealing when they’re given free reign, and don’t have any real oversight during production.

Unrefined Melissa McCarthy material is better than bad Melissa McCarthy material at least, especially when McCarthy still manages to be reasonably funny throughout most of The Boss, but McCarthy and Falcone still have a long road ahead to standing with R-rated comedy directing masters like Judd Apatow, Paul Feig and Nicholas Stoller. The two clearly aren’t giving up, as they’ve already lined up another comedy to collaborate on, one that will likely drop in theatres at some point in 2018, and I suppose that you can’t fault the two for effort and determination. 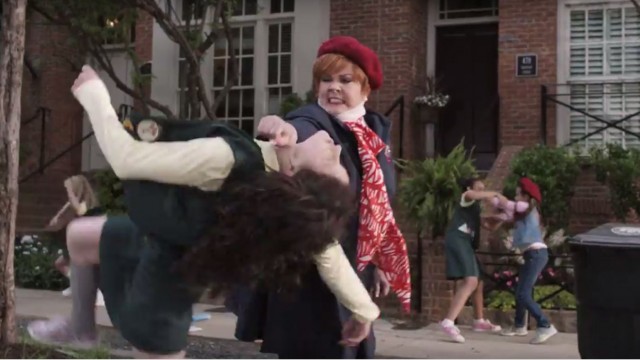 That still leaves The Boss sitting in pretty middling territory though. If you have a Melissa McCarthy fix, it’s acceptable, but it’s doubtful that you’ll be able to remember much of it after exiting the theatre. Considering that McCarthy’s previous movie was the excellent Spy from last year, The Boss is a considerable step down, but I suppose that there is one undeniable bright side to this movie; It should help creative some perspective for those who are determined to hate this Summer’s Ghostbusters reboot, a movie that, at the very least, will no doubt be a far more memorable turn for McCarthy than this movie is.

The Boss Review
While The Boss is noticeably better than McCarthy's and Falcone's previous effort, it's still a middling, forgettable comedy, with uneven, scattershot jokes that feel too unrefined.
CHARACTERS60%
PLOT60%
DIRECTION60%
THE GOOD STUFF
THE NOT-SO-GOOD STUFF
2016-04-15
60%Overall Score
Reader Rating: (0 Votes)
0%