After some recent comments by Marvel Studios boss, Kevin Feige, suggesting that one of 2019’s Marvel movies, Inhumans is going to vacate its release date on account of Disney setting a fifth Indiana Jones movie a mere week after it, the news was made official by Disney today. Inhumans has vacated its former June 12th, 2019 release date, and is currently without a new date, leaving it indefinitely suspended for now. Marvel has stressed however that the movie is not cancelled, despite a recent rumour to that effect, and they just want to find the right place for it, given that it’s a pivotal movie for the Marvel Cinematic Universe, as Feige stated shortly after its initial announcement. 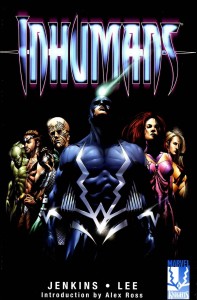 Inhumans already suffered a delay out of its originally announced November 2nd, 2018 date, due to Marvel and Sony’s deal to share the Spider-Man film rights, leading to Spider-Man: Homecoming securing itself a release date in July of 2017, and forcing all subsequent Marvel Studios movies to be pushed back into the subsequent movie’s original release date, with only the two Avengers: Infinity War movies staying put. Commenting on the inevitable delay of Inhumans, Feige also stated that the unplanned addition of Ant-Man and the Wasp to Marvel’s movie schedule in 2018, after the huge surprise success of Ant-Man last year, also led to Inhumans having to be moved back further.

Some unconfirmed speculation also claims that Marvel is tweaking their plans for Inhumans due to the likely possibility that they’re about to re-assume creative control of the Fantastic Four film rights, given the disastrous flop of 20th Century Fox’s Fantastic Four reboot from last year, and Fox’s subsequent scrapping of its planned sequel. Since Marvel recently licensed out two X-Men television shows to FOX and FX, it’s believed that the Fox Corporation are voluntarily letting a two-year production deadline lapse on a Fantastic Four sequel in exchange for the rights to make the X-Men shows, which would allow them to maintain distribution rights to dedicated movies about Marvel’s First Family, while Marvel would assume creative control of the Fantastic Four brand in the film space, allowing the Fantastic Four and all related characters and locations to be used in the Marvel Cinematic Universe. Given the heavy connection between the Inhumans and the Fantastic Four in Marvel lore, it’s definitely a possibility that Marvel may want to connect Inhumans with a new MCU-set Fantastic Four movie in some fashion, likely meaning Inhumans would land in one of Marvel’s three mystery movie release dates that are currently reserved in 2020.

While Inhumans will no doubt revolve around the royal family of the title characters from Marvel lore, including Black Bolt, whose voice has the power to decimate anything in a close radius, Medusa, whose hair can be shaped and used as a weapon, Karnak, who can instantly identify weak points in enemies, Gorgon, who can create shockwaves that rupture the earth below him, and their faithful teleporting pooch, Lockjaw, the Inhumans have already been established in the Marvel Cinematic Universe in a different way. Inhumans are a frequent issue on Marvel and ABC’s well-received television series, Agents of S.H.I.E.L.D. since midway through its second season, where they are ordinary people with certain genetic markers who develop superpowers when exposed to Terrigen Mist, essentially making them a stand-in for mutants and the X-Men personalities in the MCU, since Fox still holds the X-Men film rights and television rights, preventing those characters from being featured in the MCU.

We’ll be sure to keep an eye on any updates with Inhumans, so keep awakening Eggplante for all major news and updates on Marvel’s movie projects.