After two weak episodes to start off Season Two of Fear the Walking Dead, the show finally seems to be improving a bit this week, with, “Ouroboros” providing an overall more exciting and tightly executed experience for this struggling spin-off. The episode even cut down on the frustrating idiocy that this show’s lead characters continually suffer from, though unfortunately, not all of their infuriating stupidity was wholly extinguished, even in this better episode.

So, after Daniel figures out another piece of Strand’s agenda with the Abigail passengers, Strand comes clean with the survivors, telling them that they’re headed to Mexico. Apparently, some fortified house with supplies and defenses is waiting for them, and Madison and Travis get into a small argument about whether or not it’s a good decision. Sadly, this yet again has Travis coming off as an indecisive wimp, as he decides that drifting alone on the ocean is a better solution for whatever reason, though fortunately, by the end of the episode, he comes around to Madison’s way of thinking, giving the season a much-needed objective to strive for. 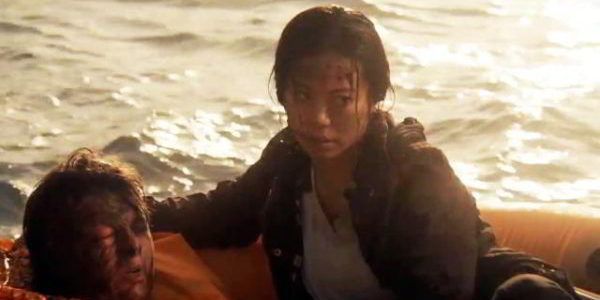 This is also the point where the show begins tying into the Flight 462 webisodes that were featured in the interim between Season One and Season Two. The main character of those webisodes, Charlie is featured in this episode, alongside the ailing Jake, who both survive the crash of the plane, though Jake is pretty much on death’s door, and is very likely to turn. The episode begins with a cold open of Charlie having to drift with some other survivors on a lifeboat for a bit, who get predictably antsy about Jake’s condition, and this already makes for a nice way to tie Charlie into the episode’s story, as one of the passengers on her lifeboat ends up being killed off-screen and becoming a Walker, which gets stuck underneath the Abigail and clogs its engine cooling system, making it dangerous for the boat to move.

Travis manages to get rid of the Walker, and the boat is forced to stand still for about a day as Travis has to fix it. Around this time, Alicia spots a big pile of luggage, likely containing supplies, on a nearby island. Despite the protests of the parents, Daniel convinces them to allow Alicia, Nick and Chris to go ashore with him, since they need supplies anyway, especially Ofelia, who is out of antibiotics. Daniel promises to keep an eye on the kids, though predictably, it’s not long before one of them wanders off. This is a zombie show, after all. 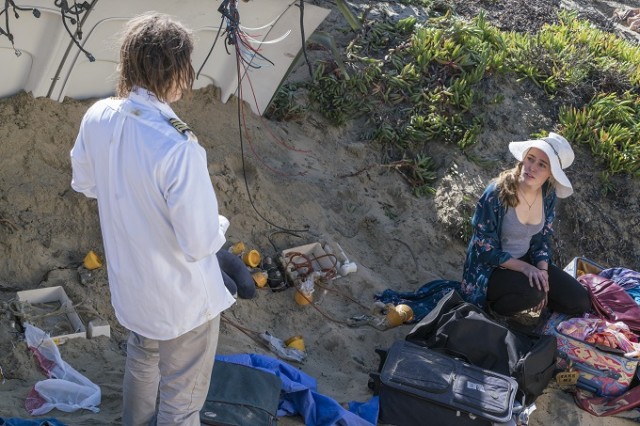 In this case, it’s Chris that inexplicably strays from the pack, eventually stumbling into the broken hull of Flight 462. After grabbing a heavy pipe and putting down some Walkers, Chris stumbles across a man that’s still alive, and one who begs Chris to put him out of his misery. This made for one of the episode’s best scenes, as Chris winces and bludgeons the man to death, failing to put him down on the first attempt to boot. Not only did this effectively put Chris in Travis’ shoes, after Travis was forced to put down Liza at the end of Season One, but it also effectively grounded Chris with his growing aggression toward the Walkers. Chris finds killing Walkers easy, but killing people that are still alive is a whole new can of worms, and Chris beautifully found that out the hard way in this scene.

Nick also somewhat suffers from some annoying carelessness, when he slips and falls into a ravine containing a half-buried Walker that’s being swarmed by crabs. After managing to kill the Walker, another falls on top of Nick, and later, this has him stumbling back to the crew, covered in Walker guts. It’s too bad that we didn’t see how Nick ultimately got out of the mess he was in, but this did present a great opportunity for Nick to discover the Walker guts trick, where being covered in Walker goo and stench will effectively make survivors invisible to Walkers, so long as they don’t move quickly or erratically. Nick’s so-called courage often makes him a reckless idiot, but in this case, it came in handy, and should provide a good advantage for the group later. 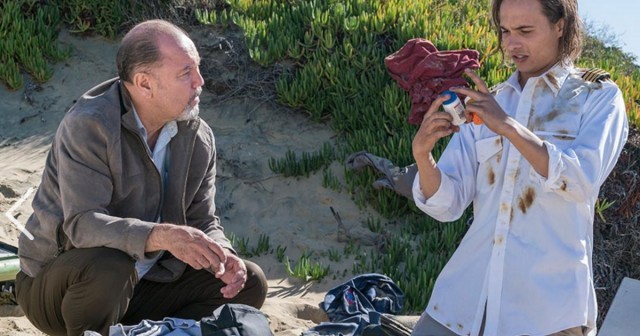 Eventually, Charlie flees past Daniel, urging him to run, and this has everyone back together, fighting off a bunch of Walkers, presumably the passengers from Flight 462. This made for a pretty solid action scene, and is definitely the most fun and exciting that Fear the Walking Dead has been in Season Two so far, especially since it’s not really having to strain for this particular incident. Best of all, there’s finally a good chunk of Walkers to encounter again! This spin-off really needs more of them.

Everyone successfully flees back to Abigail with no fatalities, but as can be expected, Strand adamantly refuses to take Charlie and Jake on as passengers. Madison tries to protest, insisting that they be given supplies, and Travis manages to convince Strand to trail them on a raft behind the boat. Initially, this looks like a good new addition to the group, especially since Charlie is a pretty cool character, and this show is in desperate need of more cool characters like Daniel and Strand. Unfortunately, as the episode ends, Strand grabs an axe and chops the raft loose, leaving Charlie and Jake to drift, and leaving Madison in stunned, saddened disbelief. As cold as this was, and it was truly ice cold, the real chilling element of Strand’s last-second action here is that it’s easy to relate to. How many of us would have done the same thing? Strand isn’t a man of compromise, and that was brilliantly displayed here, as he basically condemned Charlie and Jake to die, simply because they didn’t fit into his plans. Given that Strand still has apparent pursuers though, could this decision come back to haunt the survivors later, should Charlie and Jake be picked up by said pursuers? 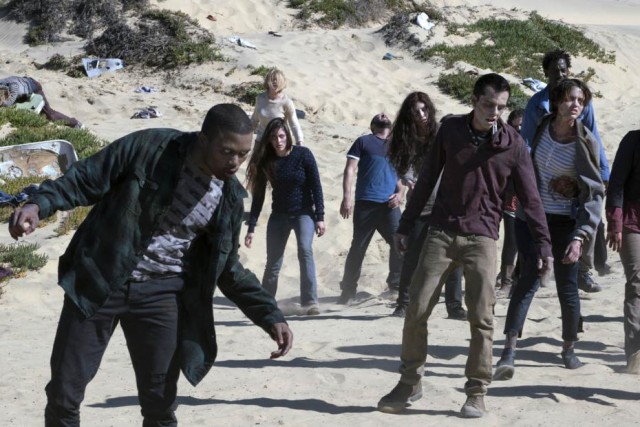 The fact that one can finally ask these questions with serious engagement proves that Fear the Walking Dead has improved a bit in this latest offering, and that’s great. “Ouroboros” certainly isn’t an excellent episode, and still doesn’t come close to measuring up to the main Walking Dead series’ finest offerings, but it’s the best that this spin-off has been in quite some time, and will hopefully represent the first time that Season Two starts finding its groove. It’s too bad that Charlie didn’t seem to end up joining our protagonists, but perhaps there’s still time later. Either way, it’s anyone’s guess as to what kind of people Strand has set a destination for. Hopefully, this mystery fort truly isn’t worse than just endlessly drifting on the waves…