NOTE: Full spoilers from throughout the third season of “Brooklyn Nine-Nine” are present in this review

Brooklyn Nine-Nine is arguably the most consistently strong and funny sitcom in the FOX lineup at this point, and Season Three kept the show’s pedigree soaring high. With Peralta and Santiago now officially dating, Holt and Gina temporarily removed from the precinct, and both Boyle and Diaz finding true love with their perfect matches, or so it seems, there was plenty going on over the course of the season, and just about all of it provided high-quality laughs on any given week!

Due to FOX attempting to re-tool their Sunday night comedy bloc (even if it turned out to be disastrous, after Cooper Barrett’s Guide to Surviving Life and Bordertown both flopped hard, seemingly guaranteeing cancellations for both), Brooklyn Nine-Nine moved to Tuesdays in the back half of its third season in 2016. Considering that Tuesday is a very crowded day for geek audiences in particular, this had the show suffering in the ratings a fair bit, though hopefully, Brooklyn Nine-Nine will return to its superior Sunday timeslot when Season Four begins this Fall. The show may have started its first season on Tuesdays, but it just feels most at home on Sundays now, where it avoids competition among the coveted 18-49 viewing audience with big event shows like The Flash and Agents of S.H.I.E.L.D. that currently dominate Tuesday television discussion, not to mention that the Tuesday slot is also up against CBS’ juggernaut procedural series, NCIS, hurting Brooklyn Nine-Nine’s ratings even further in the move. 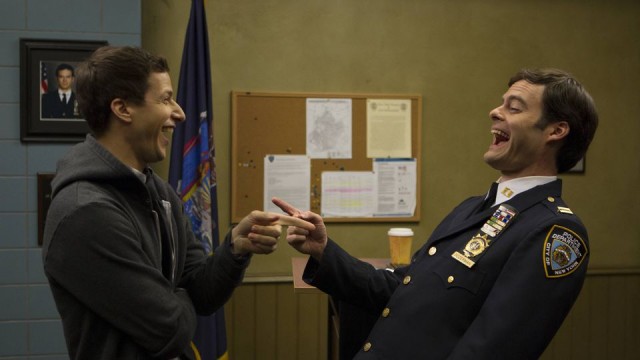 Even with the Tuesday ratings slip though, Brooklyn Nine-Nine never lost a step in its third season. The laughs still took precedence over everything else, especially in some truly goofy, off-the-wall episodes in the back half of the season, but things that have always helped this series reliably work were still at the top of their game. Honoured traditions like Peralta’s and Holt’s Halloween feud, along with the return of Peralta’s nemesis, Doug Judy, a.k.a. The Pontiac Bandit, returned funnier and more satisfying than ever, especially when both of these returning storylines had great new twists this season! Sure, the twists from last season, namely Holt and Gina being removed from the Nine-Nine, inevitably didn’t stick for long, but it’s tough to complain when this sitcom is just so lovable and quotable every week.

As hilarious as Season Three of Brooklyn Nine-Nine was, it also felt especially satisfying due to the interesting new territory that its characters were pushed to. Peralta and Santiago had to try and deal with the pressures and anxieties of dating a fellow cop, which brilliantly came to the fore in episodes like, “Yippie Kayak” and, “Maximum Security”, while the consistently inept, empty-headed Boyle had to figure his way around a fast-growing romance that ends in him and his new sweetheart wanting to adopt a child by season’s end. Boyle is still unquestionably loyal to Peralta, but even he grew up a bit this season, and that was cool to see. Hell, we even got to meet Boyle’s ex-wife at long last, in the funny midseason premiere, “Hostage Situation”, with Kathryn Hahn providing a standout guest turn as Boyle’s bitchy ex-wife, Eleanor. Other standout guest stars such as Bill Hader, Katey Sagal, Niecy Nash, Kate Flannery and Dennis Haysbert also kept this season frequently fresh and funny to boot!

The precinct even got a proper new addition later in the season, Adrian Pimento, played in a recurring role by Jason Mantzoukas, who served as both an interesting change-up to the Nine-Nine’s dynamic, and a new love interest for Diaz to replace Marcus Holt, after Diaz breaks up with Marcus during, “Into the Woods” early in the season. Pimento’s hook of being a traumatized Nine-Nine detective that was undercover for twelve years, and constantly tells horrible, disgusting stories while being unrelentingly paranoid, made for some great gags. On top of that, Pimento’s emotionally stunted personality made him an oddly perfect fit for Diaz, whose more highly explored personal life made her more vulnerable, but no less badass this season, making the twisted engagement between the two, which comes completely out of nowhere, feel strangely fitting and charming.

In fact, Pimento proved to be a huge part of the season’s climax, when he’s targeted by a crime boss named Jimmy Figgis, which creates an interesting re-tooling of the show for Season Three’s final handful of episodes, converting it into a serialized format that has the precinct working together to apprehend the turncoat FBI agents that are trying to bury Pimento. While this idea didn’t get off the ground right away, it provided a great way to raise the stakes for a season finale that was both exciting and hilarious at the same time. Pimento is still in hiding, and Jimmy Figgis is still at large by the end of the season, but it was awesome to see everyone at the Nine-Nine working together so passionately to help one of their own. Peralta and Holt pay an especially heavy price as well, when Figgis threatens their lives, and they end the season by having to go into the Witness Protection Program, as, “Greg and Larry” in Florida. This was a bit of a rushed conclusion to the season, but it does present another interesting way to shake up the show for a bit when Season Four begins, even if, like Holt’s and Gina’s, “Firing”, this big change probably won’t stick for long.

While the otherwise great Season Two sometimes tripped over a handful of really disappointing episodes, Season Three’s worst episodes were still overall good, and it never felt like the season truly came up short in any of its offerings. The back half episodes of Season Three were especially sublime, and were among the funniest and most enjoyable sitcom episodes in this entire television season overall, on FOX and otherwise! Brooklyn Nine-Nine just really felt like it was at the top of its game this season, even when it was stuck in an inferior timeslot in the back half, and that’s fantastic! The show is going into its fourth season with all of the charm and laugh factor in the world, and with Season Three of Brooklyn Nine-Nine already having made its way to Netflix in its entirety, sitcom fans, or anyone who appreciates a really well-made television show, have no excuse not to be tuning in to the Nine-Nine’s shenanigans at this point!