It’s been a long, turbulent road for spiritual Mega Man successor, Mighty No. 9, which has suffered several big delays in the final stretches of its development. At last though, series creator and Mega Man godfather, Keiji Inafune has confirmed that the game has ‘gone gold’, meaning that it has finished development and is entering the mass production and distribution phase, so there will be no more delays for the game. Not only that, but a final release date has been decided, and Inafune has given his word that the release dates for each region will not be changed again. 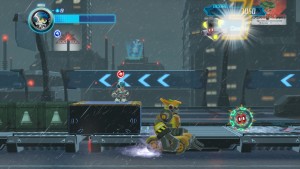 Mighty No. 9 is initially releasing in North America on June 21st, and will expand to the rest of the world on June 24th. The game will primarily be available digitally, and can only be bought digitally on PC, Mac, Linux, Xbox 360 and PlayStation 3, though due to a publishing deal with Deep Silver, the PlayStation 4, Xbox One and Wii U versions of the game will have physical packages that can be optionally bought at retail stores. As was always the plan, the handheld ports of Mighty No. 9 for Nintendo 3DS and PlayStation Vita will not release alongside the console and PC builds, and will launch later in 2016. Bear in mind as well that the PlayStation versions are also planned to be cross-buy, so buying any of the three PlayStation builds will grant you free digital copies for the remaining two versions on PlayStation platforms. Finally, a Collector’s Edition of Mighty No. 9 that includes a special figurine of robot protagonist, Beck is also being sold at retail, though is not offered for Wii U, and only comes in a PlayStation 4 or Xbox One build.

Mighty No. 9 was initially announced on crowdfunding webpage, Kickstarter, where it quickly accrued the necessary funding, and received heaps of additional funding that allowed it to achieve higher stretch goals. The game is a 2D platformer with shooting elements that takes after Capcom’s highly beloved classic Mega Man games, and is meant to fill a void left by Capcom’s lack of proper Mega Man game releases since 2010. The game was initially planned for launch in September of 2015, but was delayed for quality assurance reasons, then targeting a launch in February of 2016. Unfortunately, the game was delayed again at that point, due to bugs in the netcode that comprised a multiplayer element, and slotted in for a vague ‘Spring 2016’ launch. Finally though, Mighty No. 9 is around the corner.

Keep dashing to Eggplante for all major news and updates on Mighty No. 9.